Guardians big and small, it’s time for this week’s Xur inventory. This is the last Xur visit before Shadowkeep officially launches on Tuesday, 10/1. This post will give you updates on his inventory and other Xur changes coming with the Shadowkeep release.

Along with the wares listed below, Xur also has one Isochronal Engram per account. This will drop any armor that a player is missing from their collection from any season prior to Joker’s Wild and Season of Opulence. 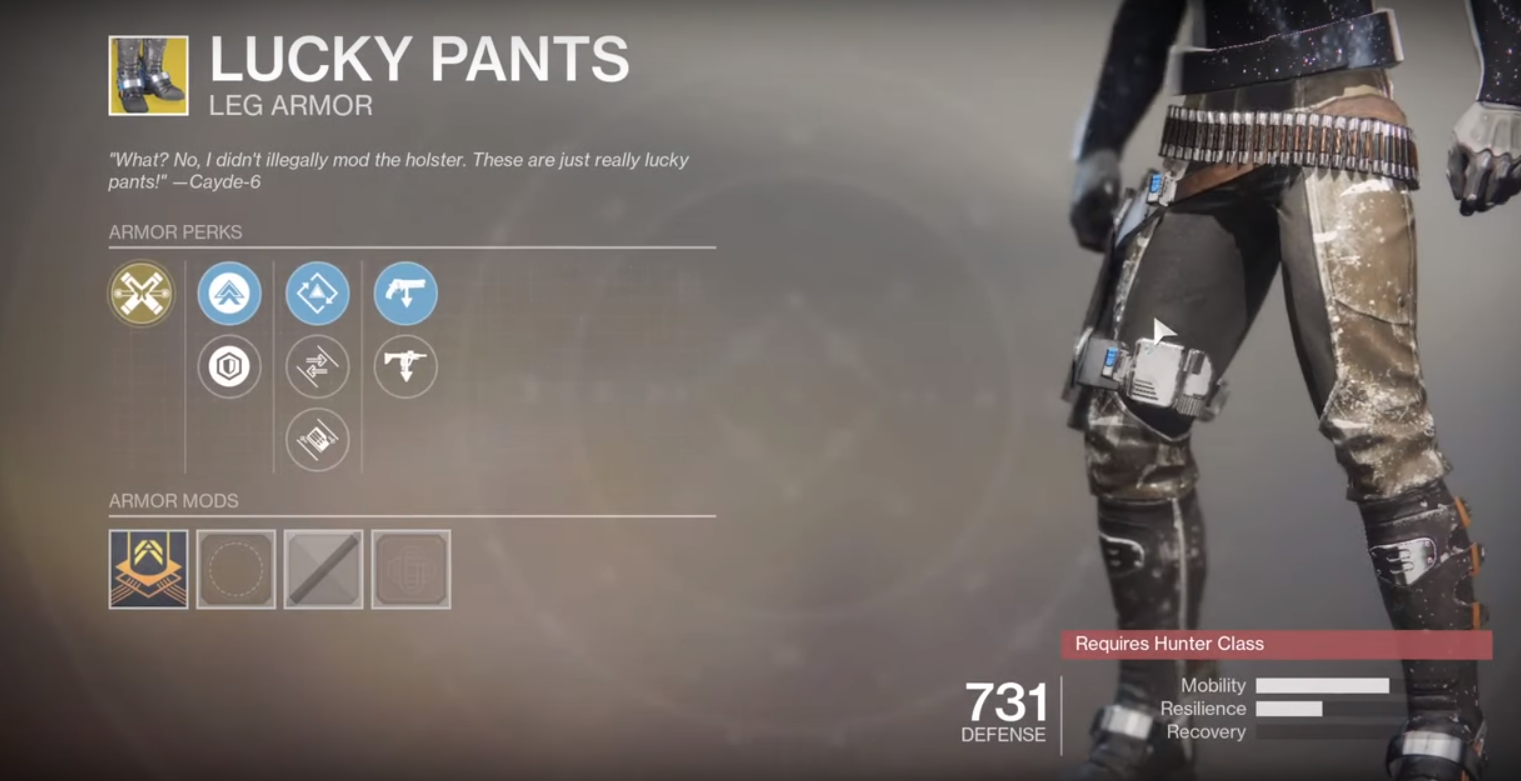 The exotic armor Lucky Pants were first introduced in Year 1 of Destiny 2. They have the exotic perk Illegally Modded Holster. This allows the player to ready hand cannons very quickly as well as increase accuracy of the first shot. Additionally, precision hits partially reload any stowed hand cannons. The Xur-specific drops this week on this armor piece include the options for the following perks in slot 1: Perpetuation, Traction, and Oversize Weapon Dexterity, and the following perks in slot 2 Hand Cannon Scavenger, Submachine Gun Scavenger. 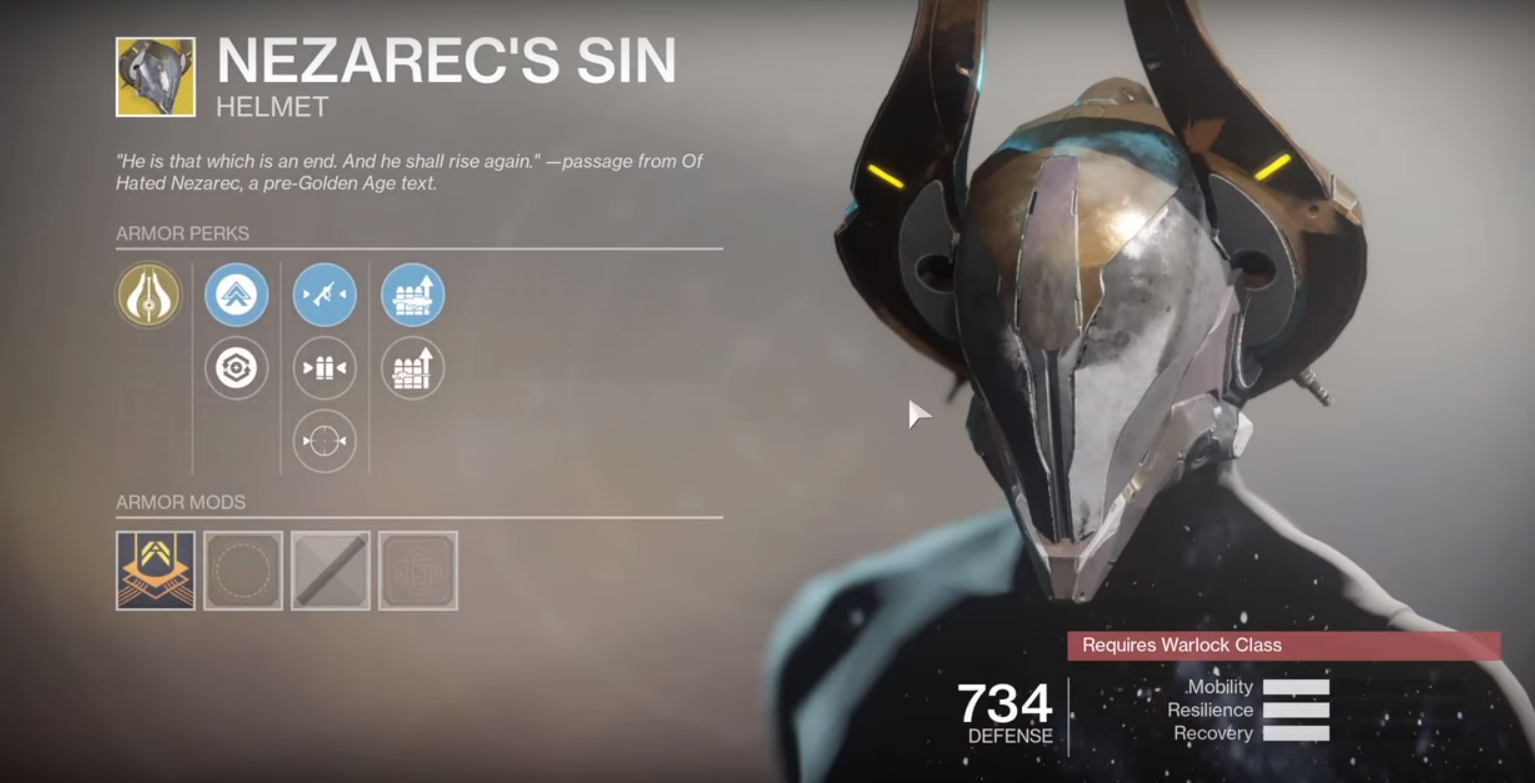 The exotic armor Nezarec’s Sin was first introduced in Year 1 of Destiny 2 as well. It has the exotic perk Abyssal Extractors, which causes Void damage kills to recharge your ability energy. The void energy can be from any source, including subclass energy or void weapons. The Xur-specific drops this week on this armor piece include the options for the following perks in slot 1: Submachine Gun Targeting, Energy Weapon Targeting, and Precision Weapon Targeting, and the following perks in slot 2 Rocket Launcher Reserves and Sniper Rifle Reserves. 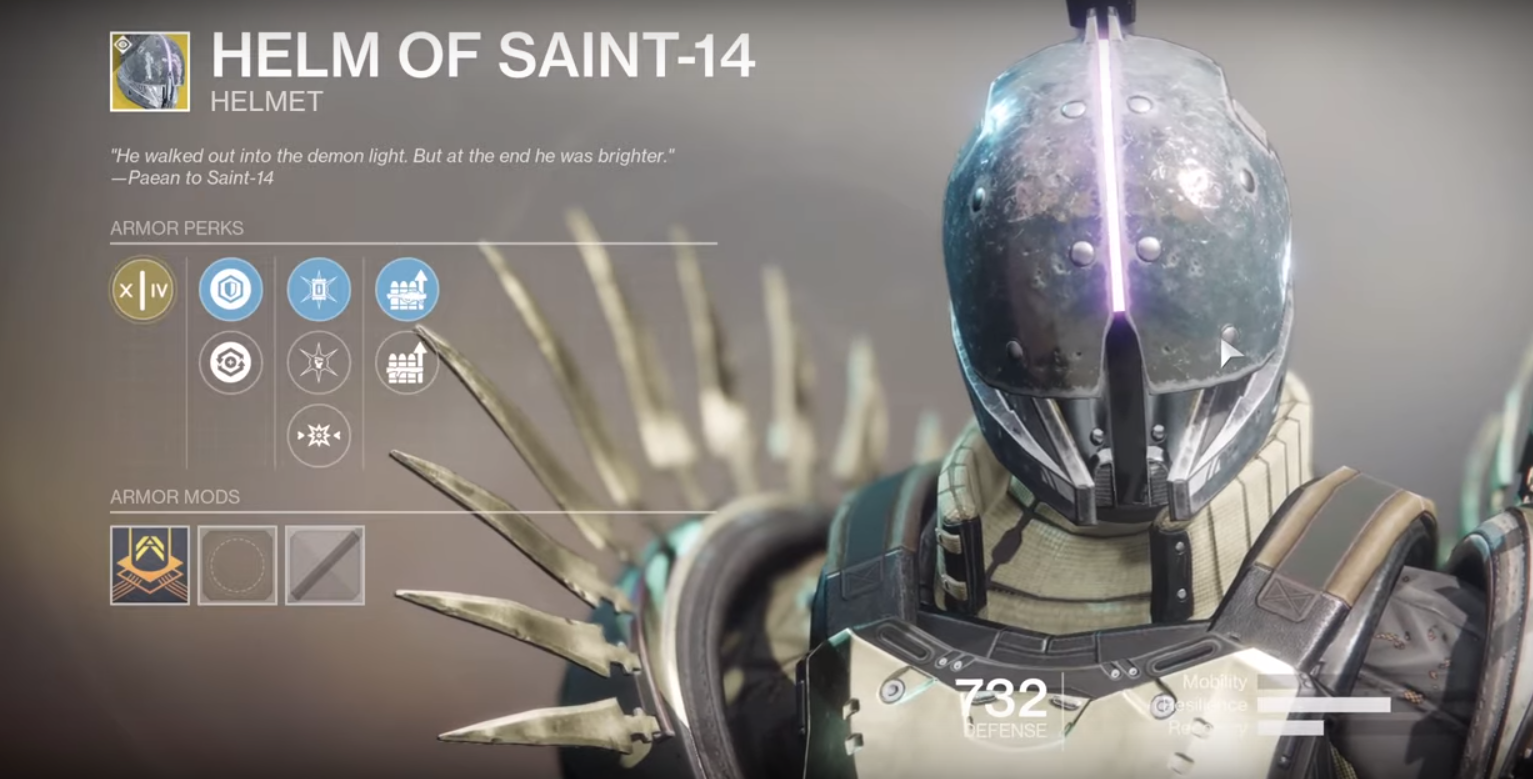 The exotic armor Helm of Saint-14 was first introduced in Destiny, and returned in Destiny 2 as part of the Curse of Osiris DLC. It was originally obtainable through an exotic quest. It has the exotic perk Starless Night, which causes your Ward of Dawn to blind enemies who walk inside it. Guarding with Sentinel Shield will provide the same result. The Xur-specific drops this week on this armor piece include the options for the following perks in slot 1: Heavy Lifting, Hands-On, and Kinetic Weapon Targeting, and the following perks in slot 2 Rocket Launcher Reserves and Shotgun Reserves. 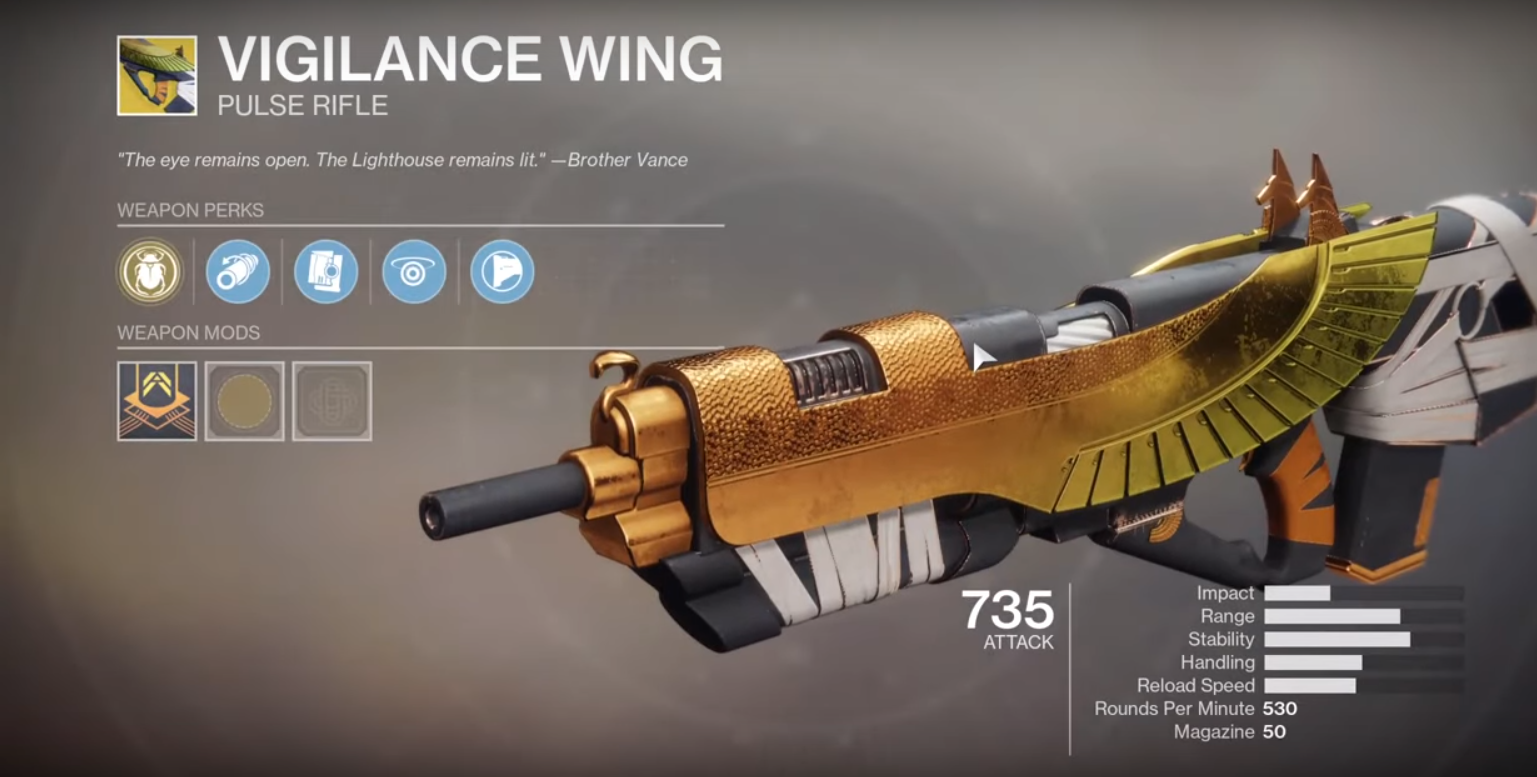 Vigilance Wing was one of the first exotic weapons available in Destiny 2, and is originally from Destiny 2.  It’s a pulse rifle with the perk called Harsh Truths, which fires in five-round bursts instead of three. Harsh Truths also provides healing when an ally dies. There is a catalyst available for this weapon, which can be completed by getting 250 Crucible kills and five avenge a teammate medals. Completing the catalyst will yield the Full Auto Trigger System perk, which turns the weapon full auto by holding down the trigger.

The most recent This Week at Bungie (TWAB) had some news regarding Xur in the upcoming DLC, Shadowkeep, releasing on Tuesday, 10/1 @ 10:am PST. With the launch of Shadowkeep, Xur’s inventory pool and Fated Engram now include world-drop Exotics from Year 2. This includes Joker’s Wild and Season of Opulence exotics, which were not previously submitted.

As mentioned, Shadowkeep is just around the corner. Keep the grind for materials going! Keep in mind, for those hoarding bounties, all Crucible, Vanguard, and Gambit bounties will disappear at the launch of Shadowkeep, however Eververse, Gunsmith, and Clan Bounties will not disappear, so these are the ones to stock up on over the next few days.

Don’t forget that starting at 10am PST on Monday, 9/30, Destiny and Destiny 2 servers will be brought offline for a full 24 hours. They will be brought back online at the launch of Shadowkeep. PC players can already pre-load the expansion. Console players should keep an eye on @BungieHelp on Twitter for when pre-loads can begin. Bungie has stated it will be sometime in the 24 hour maintenance window. Until then, eyes up and get stoked! The Moon is almost here.