Forza Horizon 5, Microsoft’s open-world racing game, is roaring onto consoles Tuesday, November 9. For those who purchased the VIP package, early access opened for the game on Friday. Having been a longtime fan of the series – and racing games in general – I jumped at the chance to discover what new world and experience the latest installment of Forza Horizon had to offer.

Departing from the simulation racing of the original Forza series or other games in the genre like Gran Turismo, Forza Horizon 5 is an open world racing experience that’s more arcade than sim. In the game you obtain, tune, and race cars through an open world. This includes set races with fixed start and finish lines over roads or cross country – as well as organic races against AI or player-controlled cars as you drive through the countryside exploring.

The world is populated with other cars – many of them live people and many are AI’s. One thing I really enjoy is that Forza uses a system for its AI called ‘Drivatars’ that populates the world with AI-controlled cars bearing the names of people on your friends list. And if they also play Forza Horizon 5, their current level and car designs will be visible as well. It’s a fantastic, asynchronous way to interact with your friends. 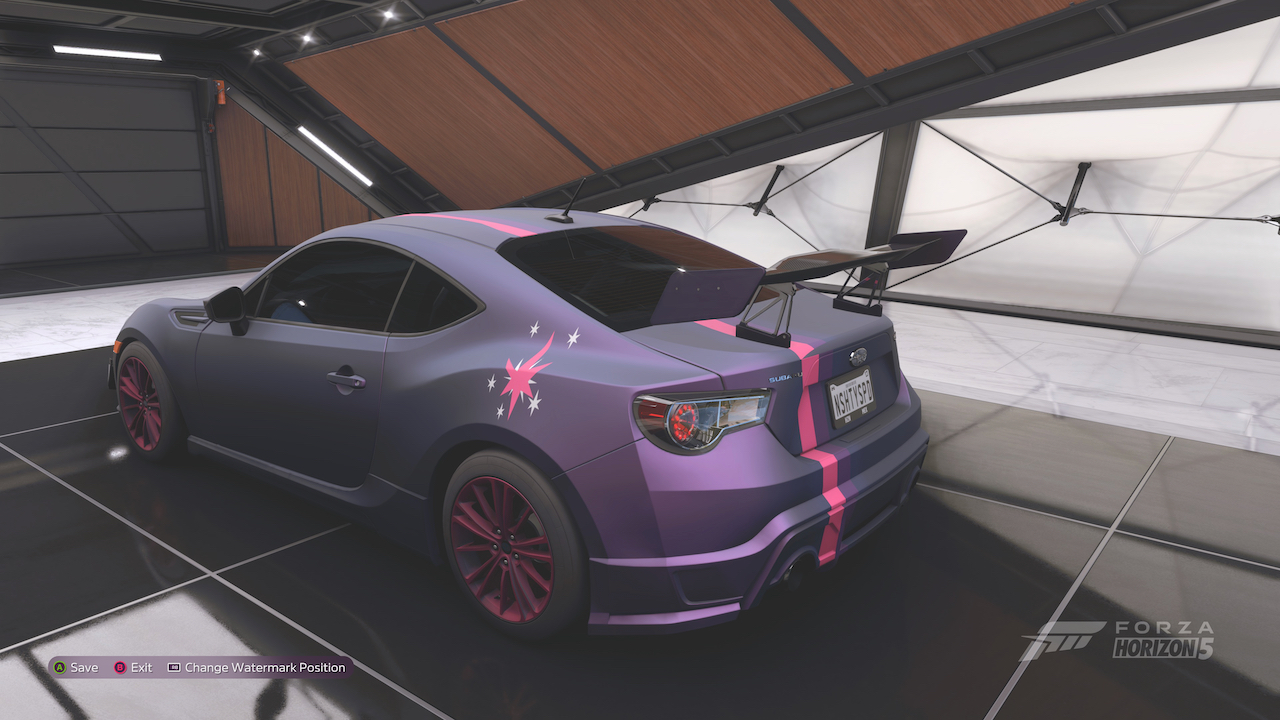 Don’t lie. You secretly want to see my Drivatar chase you down in a race with my lovely My Little Pony BRZ…

Previous Forza Horizon titles have taken us to Colorado, Southern France, Australia, and the UK. Forza Horizon 5 takes us into Mexico, with stunning visuals and unique environments to explore. Just like the titles before, Forza Horizon 5 is fun to just drive around and see the world. It’s absolutely beautiful and looks incredible on the Xbox Series X. I drove through the forest at a snail’s pace just to admire the way the rays of sunshine cut through the gaps in the foliage and diffused near the ground. The vibrancy and flavors and diversity of Mexico are on full display in this game. I laughed out loud the first time I saw a regular old VW Beetle – el vocho – as one of the normal cars in traffic on the local roads. And true to life, they are everywhere in this game.

Early on, a story mission takes you through some ruins and I admit I felt a pang of guilt off-roading through an ancient temple based on a UNESCO World Heritage Site. It’s a bit silly, but I don’t think I’ll race through there again. There certainly isn’t a shortage of content to enjoy.

What’s New to the Series?

As far as I can tell – not a whole lot. Most of the car roster is the same, racing mechanics are the same, the menus are the same and it’s kept the four seasons system from Forza Horizon 4 – and none of that’s a bad thing. It’s all the same things you expect – just more of it! It’s like going to the All-Star game for two consecutive years. You know the format and what to expect, but now you’ve got new scenery and even more things to tickle the senses! Where it’s obvious that Forza Horizon 5 has definitely gone all in is with the community features. The same system for sharing races, liveries, tunes, and such still remains – but they’ve cranked up the multiplayer to eleven. The battle royale Eliminator event added after launch to Forza Horizon 4 is back and is incredibly fun. They’ve also revamped the Forzathon Live events into simply the Forza Arcade – random events spawning on the map with collective community goals and unique rewards. The major difference now is that there are seemingly more of them on the map – and this time they’re tailored to a specific driving style. Some are for drifting, others off-road mischief. This is extremely helpful in making sure you bring the right car to the event.

And of course – clubs!! Be sure to search and join the official MulehornGaming Forza Horizon 5 club once you’ve unlocked it. We’d love to have you!

Forza Horizon 5 may not have changed the formula, but it doesn’t need to. It’s more polished than its predecessors, has tons of content, and is a great escape for those looking to go head-to-head through the jungle or just looking for a gentle cruise through the beautiful country.

Forza Horizon 5 is available on Xbox Game Pass beginning November 9, with early access beginning for some players on November 5.