When first announced, Star Wars: Squadrons ignited the imaginations of fans who have been clamoring for a dedicated Star Wars space shooter. Some fans had been getting by with decent game modes like Starfighter Assault in Star Wars Battlefront II, but the desire for a spiritual sequel to games like X-Wing vs. TIE Fighter lingered. This past weekend, Star Wars: Squadrons dropped, but does it do justice to the legacy of excellent Star Wars space sim games of the past?

All Ships, Prepare for Jump to Hyperspace!

The bulk of the campaign for Star Wars: Squadrons takes place in the immediate aftermath of Return of the Jedi — the New Republic is starting to take shape and a broken Empire is reeling and trying to contain its losses. As a player, you alternate between flying missions for the Empire and the New Republic. I’ve not yet completed the campaign, but I very much enjoy the stories being told and the universe the game is exploring.

I highly recommend spending plenty of time in the single-player story mode — not only to appreciate the incredible set pieces, but to help shakedown your keybindings or setup, and to help familiarize yourself with the various starfighters in the game.

Control, Control. You Must Learn Control.

I was able to play Star Wars: Squadrons on both Xbox and PC, and one thing I certainly appreciate is the freedom to map controls and keybindings to whatever I feel works best for me. Power and system management plays a significant role in your success as a pilot, and so you need to be comfortable with those commands.

I was slightly disappointed that the game didn’t recognize my specific HOTAS setup on my PC and have a recommended mapping profile. Instead, it ignored my separate throttle completely and assumed I would only be using a flight stick. Wasn’t the end of the world, but did take plenty of time figuring out which controls I’d prefer to map to which buttons. I’m still in the process of fine-tuning my setup, but overall I’m pleased. 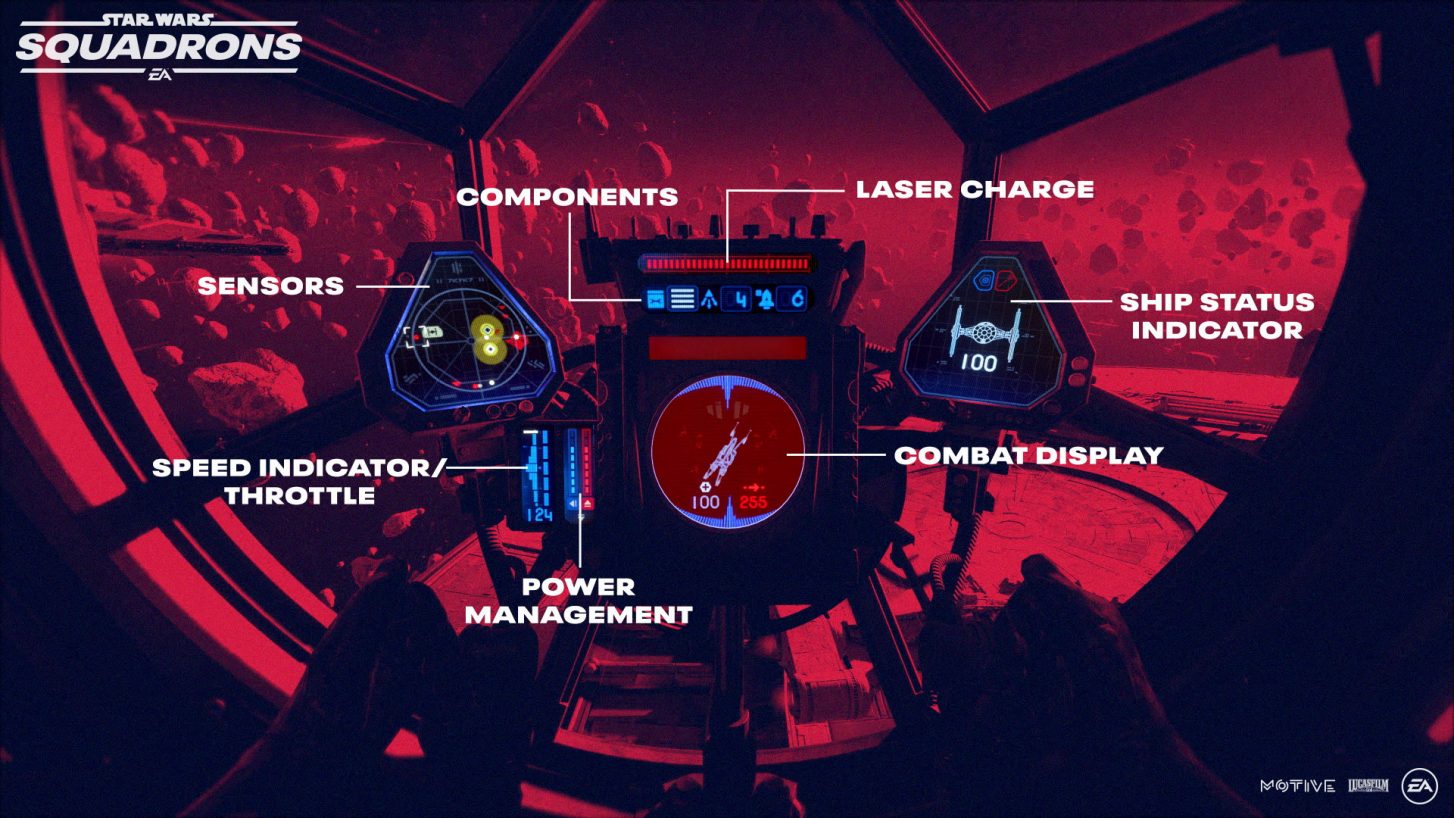 The game also has made smart design choices, leaving behind some of the less important or obvious controls that were present in the X-Wing vs. TIE Fighter games, such as the need to lock your S-foils in attack position on X-Wings before being able to fire weapons (yes, that was a thing), or the need to press a button to jump to hyperspace to complete a mission. In Squadrons, you just fly to the jump point or return to your ship’s hanger, depending on your allegiance or circumstances.

But I also miss some of the granularity of the controls of the old games not present in Squadrons which allowed you to link your weapons together. For quad-cannon craft like the TIE Interceptor or X-Wing, you could toggle between your lasers firing a single bolt at a time, two at a time, or all four at a time, with varying impacts on your weapon energy reserves. 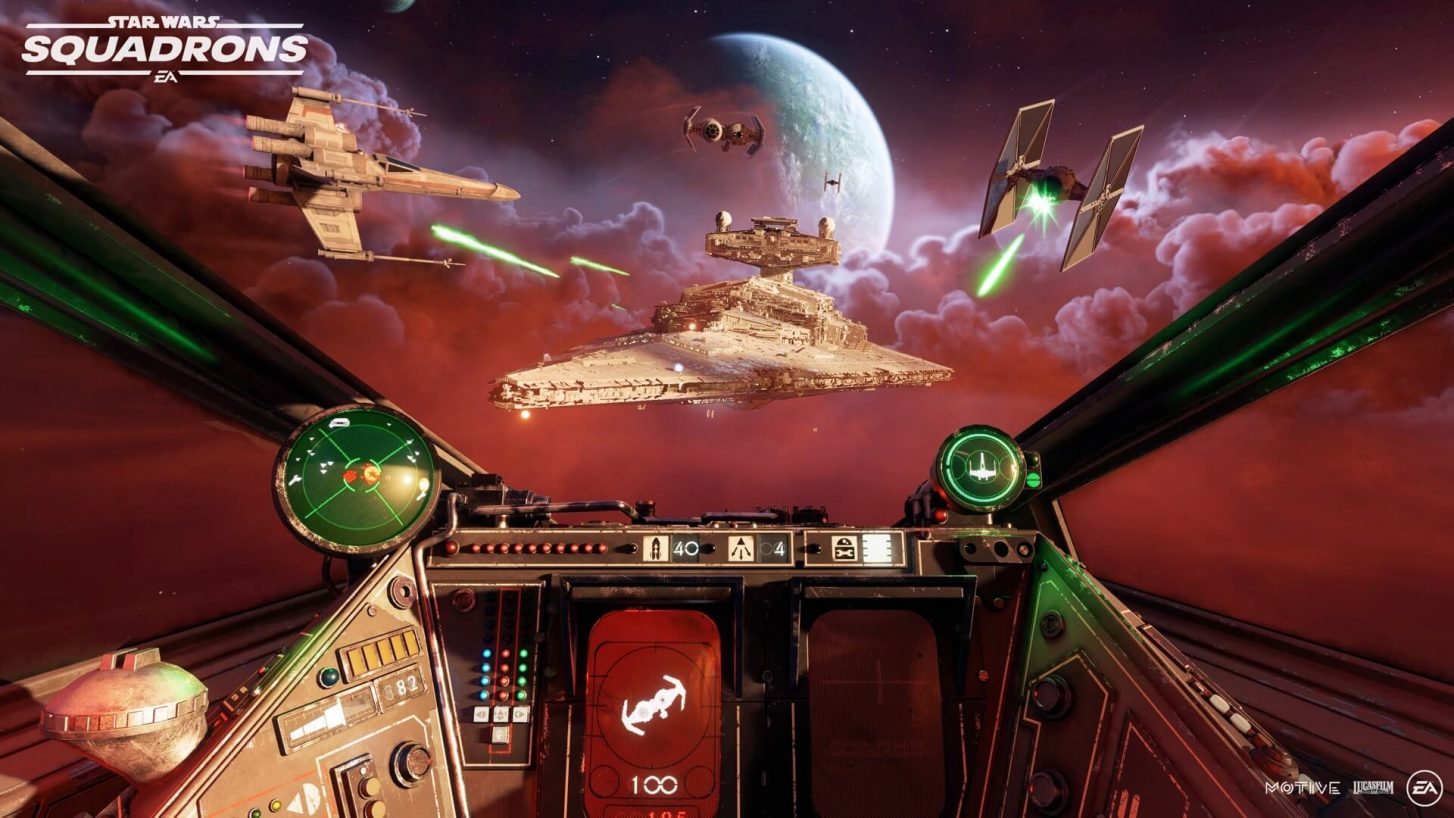 The game also supports VR, however, I was disappointed to learn that it does not (at least yet) support head tracking like Star Citizen or Elite Dangerous. This makes appreciating the excellent cockpit design — especially on the New Republic starfighters — a bit more difficult.

Star Wars: Squadrons offers two multiplayer modes: Dogfight and Fleet Battles. Dogfights are simple, five-on-five matches that offer a great place to experiment with tactics, load-outs, and other craft. When queuing for a match, the game will ask you if you’d rather play Imperial or New Republic. If you have no preference, you can indicate that as well and receive a tidy little XP bonus upon match completion for helping facilitate matchmaking.

Dogfights are incredibly fun and take you through some of the most incredible level design I’ve ever experienced in a multiplayer match. It’s clear the designers recognized and maximized the fact that the battlefields are truly three dimensional and create enough interesting obstacles to allow for cover or sneak attacks. Not going to lie, it’s extremely satisfying to stalk an opponent who’s flying on the other side of a piece of debris and have your blasters trained and ready to fire at the exact point he emerges.

Once you’ve reached Level 5 in your online rank, you unlock Fleet Battles which are a ton of fun. The game still retains the five-on-five format, only this time each team also has a flagship that is the ultimate target, protected by two smaller cruisers. When the battle begins, you engage in a dogfight with the opposing team to gain morale. As soon as either team has gained enough morale, the battlefront shifts forward, allowing that team to attack the cruisers. If the defending team is able to gain enough morale defending their cruisers, the battle shifts putting the former defenders on the offensive against the cruisers. Once an opponent’s cruisers are destroyed, the team can begin working on the flagship. Destroy the flagship and you win. This mode is extremely fun, as the battle shifts back and forth so pilots always feel like they’ve got a chance to win, no matter the odds. 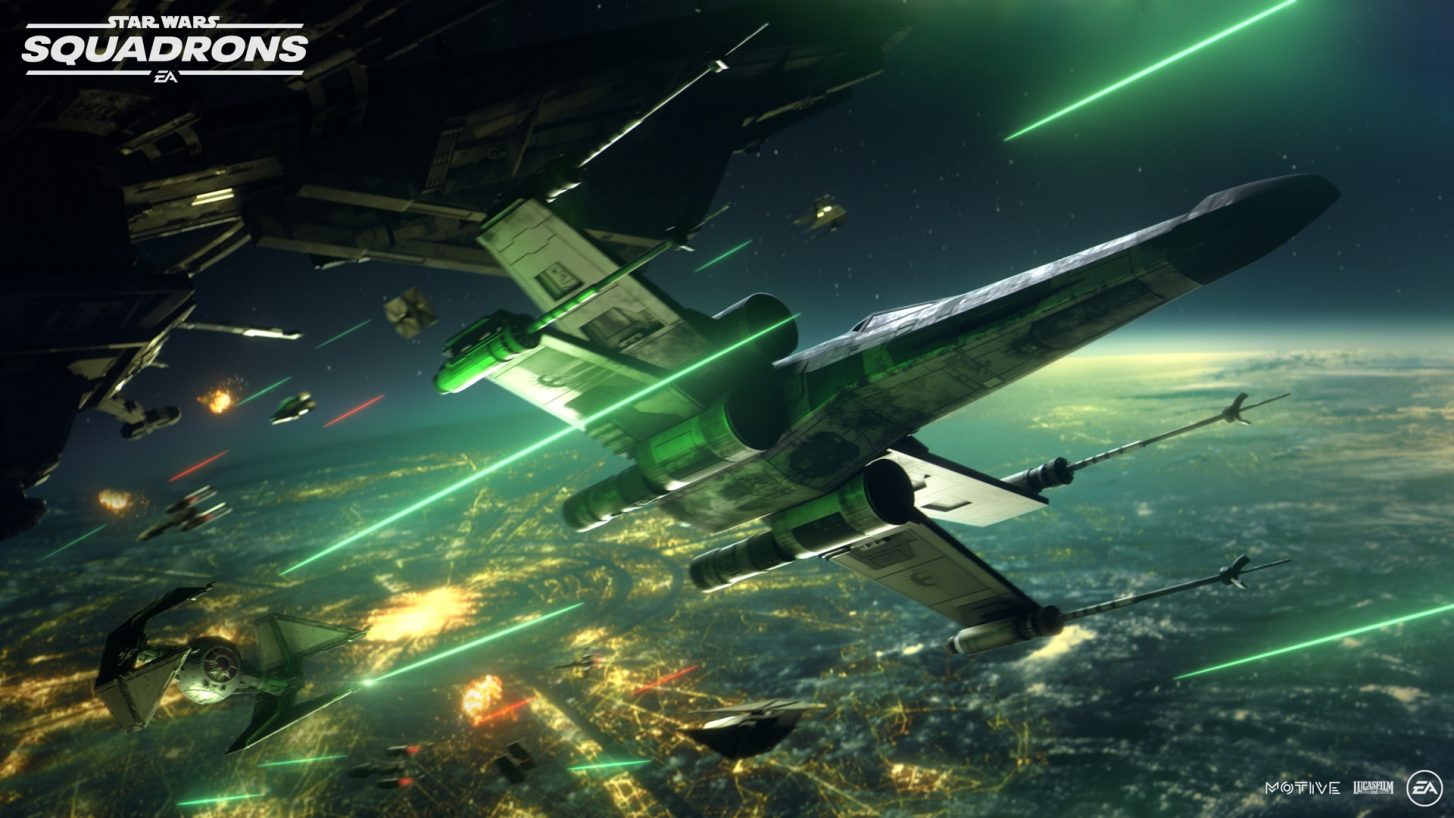 Going into multiplayer, I was a little concerned about balance because in Star Wars lore, most TIE models don’t have shields whereas the New Republic’s do. And true to the lore, that’s how it’s been implemented in the game. Yet, even flying a TIE Fighter I never felt outmatched by an X-Wing or an A-Wing simply because of missing shields. While TIE’s tend to have slightly higher hull armor than their counterparts in the game, it’s still less than the New Republic ships’ hull and shield values combined. Obviously, there are some mismatches — don’t expect a Y-Wing to last very long against a TIE Interceptor — but that’s more a function of the ship class strengths and weaknesses.

You Probably Didn’t Recognize Me Because of the Red Arm

Lastly, Star Wars: Squadrons introduces customization to the Star Wars space sim genre for the first time. There are various flight suits and helmets to unlock, paint jobs for your ships, and equipment for your preferred ships that add stat bonuses, usually at the expense of a stat penalty.

None of the cosmetic or equipment mechanics are hidden behind battle passes, premium currency stores, loot boxes, or other surprise mechanics. Everything in the game can be earned by playing the game either by leveling up or completing specific challenges. And there are some sweet looking paint jobs to be had.

I Have A Really Good Feeling About This

At the end of the day, EA has delivered what the fans have been craving — a worthy successor to the X-Wing vs TIE Fighter series of games. The flight controls don’t feel arcade-like at all, ship combat is balanced and will reward the better-skilled pilot, multiplayer areas are smartly designed, and the sound…the SOUND!! Between the sweeping score and the incredible sound work done by the Squadrons team, you’ll feel like you’re the hero of your very own saga.

Star Wars: Squadrons is an excellent space flight simulator that carries on the legacy of past Star Wars games. The gameplay is balanced and deep, though novice pilots may experience a bit of a learning curve. Fortunately, the story mode teaches you the skills needed to excel. While the game is available on consoles as well as PC, the best experience will be with a HOTAS or flight stick rather than a controller.
9