At E3 2018 Star Wars fans had a new single-player Star Wars game dangled before their eyes. Anytime the words “Star Wars”  are flashed in front of my face they can’t help but grab my full attention. As a kid who grew up on the original trilogy, Star Wars is a holy sacrament of my childhood. Imagining myself as a Jedi swinging my lightsaber and defending the defenseless. It was safe to say that I was going to try out this game even if it turned out to be bad, but to me and many others surprise, Respawn knocked it out of the park on this one. Check out my spoiler-free review. 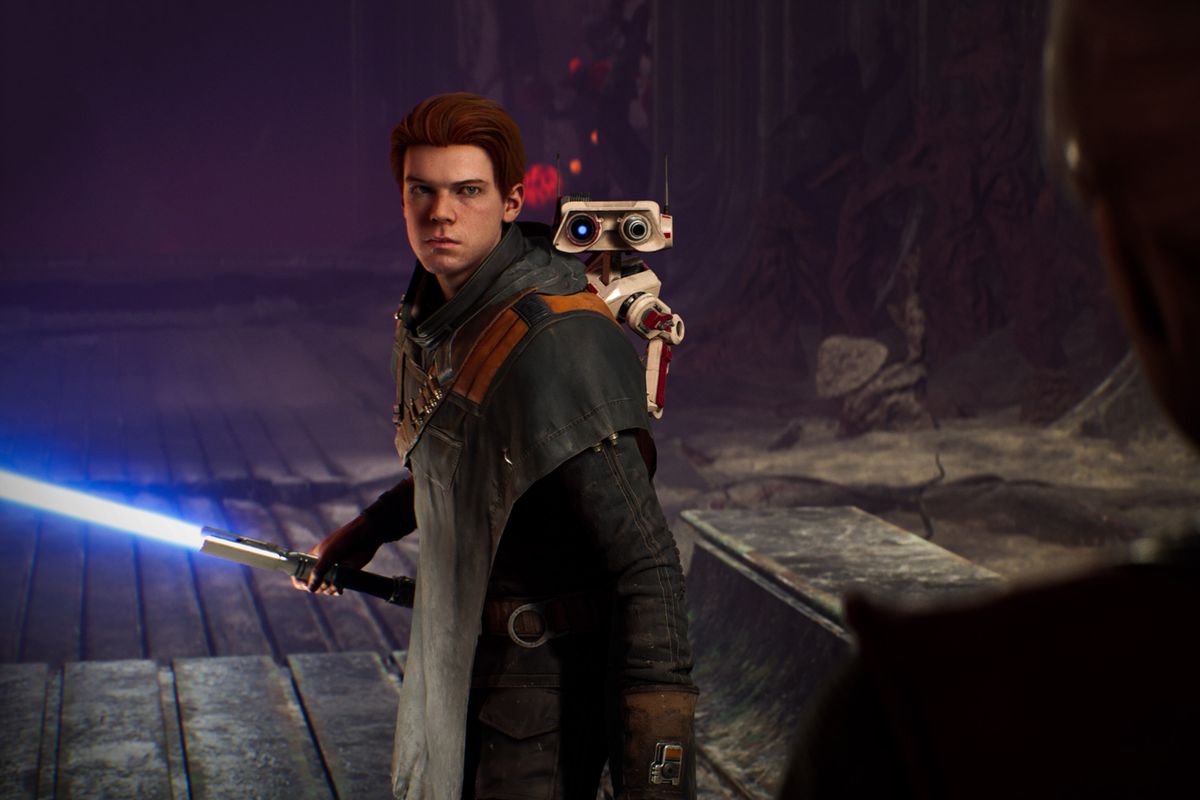 Jedi: Fallen Order is an action-adventure game set five years after Episode III: Revenge of the Sith and Order 66. The game follows a young padawan learner named Cal Kestis hiding out on Bracca, as he works as a scrapper in a junkyard. The opening scene thrusts you into the world post-Clone Wars and in the early stages of the Empire. As young Cal tries to blend in the inevitable happens. Revealing himself to have force powers when trying to save a friend, the Inquisitors find out about him and begin their hunt for Cal. He is forced to go on the run and along the way meets others supportive of the Jedi Order and the Rebellions cause. 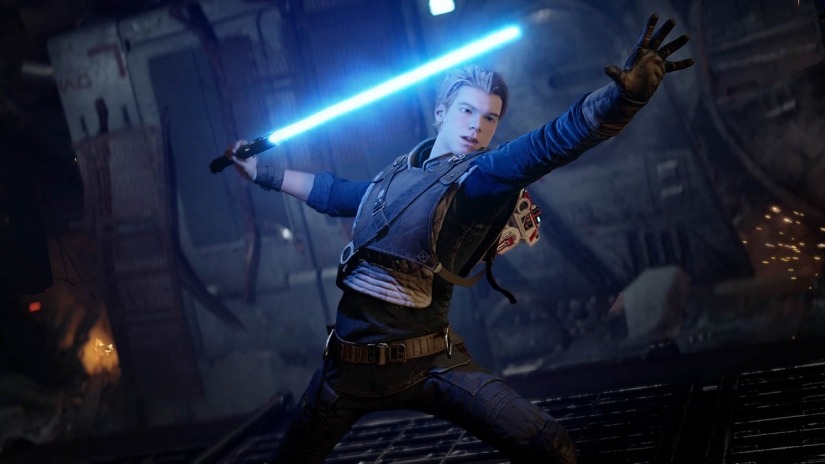 There is a lot to like about the new Star Wars game. Respawn seems to have taken all the things I loved about other games and smashed them all together, and at the same time making it their own. You can see the inspiration as at times as it feels like Uncharted, God of War, Dark Souls, and Force Unleashed. All wrapped up in a pretty Star Wars bow. This is something my other podcast hosts and I have said for a long time. Take the good from other games and make it your own. Respawn has managed to do that in Jedi: Fallen Order. Seeing as how I’ve never played Dark Souls or Bloodborne the combat seems to me as very God of War like. With Stig Asmussen working on the game, who is known for his work on God of War, I see why the combat seems to be a lot like God of War.

The combat does take some time to get used to. This is not a hack and slash style game. And I had to pull back on my Mulehorn Jenkins tendencies. It took me a good hour to two hours to really get down the combat, but once I did it was very satisfying to finally slice up some bugs, bots, and Stormtroopers. The combat relies heavily on a parry and dodge style system. Stronger enemies have a guard bar that you will have to whittle down in order to start causing damage. I was a little concerned that it might slow down the combat flow, but Respawn does a very good job of giving you counters in the parry system and abilities to breakthrough those guards and cut down even harder enemies. Below is a clip to give you a visual of what I mean.

Once I got the hang of the combat it was fluid and super satisfying. Combining them with some great sound effects and force abilities and it made this Star Wars fan giddy.

Unlike other single-player games, you can’t save the game on the fly. You have meditation locations where the game will trigger a save point for you. This is where you can really see the Dark Souls influence. However, Respawn did allow you to respawn in certain spots if you died while trying to complete a wall run, or if you are like me fall off a cliff while reading your stream chat (Editor’s Note: Mule really has a problem with this…he also should not be the driver while streaming games with vehicles…)…Thankfully you do not lose progress, or chests you’ve opened, it just respawns you with a little less health in the location where you just died. The only time you will be loaded back to a meditation location is if you die in combat or run out of health. This also ups the challenge as there are a few boss fights where you have to fight through a few ads to get back to the boss again. It can be annoying if you’ve failed 3 or 4 times on the boss fight, but it really does add to the challenge of the game. It won’t hold your hand, especially on higher difficulties. Along with the meditation locations, if you choose to rest you get your stims back for healing, full health bar, and also the enemies in the location respawn in. This is a great way to gain some extra XP or do some XP farming if you are trying to unlock more force powers.

And speaking of force powers, the approach Respawn took for our padawan was that we had to reestablish our connection to the force. So as you level up your XP you get ability points that you use to select what abilities you want to learn. As you progress in the game you learn some innate abilities and other abilities you have to spend points to upgrade. For example, you have to play through the game to unlock force push as an innate ability but you can also upgrade it in your ability tree. I loved how all of these mechanics lead to a more layer depth of game play.

There are a lot of things that really stood out to me in this game. I can easily say this is the best single-player Star Wars game we have had in a very long time. It seems like nothing has been able to live up to Bioware’s Knights of the Old Republic (KOTOR). While this game is not a KOTOR and is a different style of game it is a pretty darn good one. The world-building in the game and story really pulled me in. I wanted to explore every planet I went to and find all the chest and loot and cosmetic items, but the story was compelling me to keep pushing forward. I had to know what was gonna happen next.

So here are a few of the things that stood out for me.

1. Best companion? BD-1 of course. That little droid was a delight the whole game. Great banter between Cal and BD. And so many little moments that just enriched the game. I couldn’t stop laughing when I saw BD randomly pushing button on the Mantis.

2. Story. The story did a fantastic job of staying true to the Star Wars lore that has already been established as canon. And can we talk about the ending? Oh no, wait, I won’t. No spoilers, but the ending was fantastic and even if you are remotely a Star Wars fan you will really really enjoy that ending.

3. Combat was another thing that was super fun. It has a learning curve but once you get that down it becomes very fluid and the combination of the lightsaber and force abilities make for some really fun and epic moments.

4. The world. The game is beautiful. Respawn did a fantastic job of building a world that makes you want to explore. Sometimes I wish I could have explored more areas but some zone were purely for aesthetics.

I also wanted to make a wish list of things I hope will be added to the game in future updates or things I wished were in the game now.

1. Fast travel. Although, I understand the reason for no fast travel there were times I’d get so turned around on the map or not know where to go to get back to my ship that I wished I had an option to fast travel to my ship or other meditation locations. I’m hoping in future updates this might be one of the things Respawn will consider adding.

2. Boss respawn points. I like that the game is challenging and that there are save locations at meditation points only, but in some of the boss fights it’s rather annoying having to fight through ads just to get back to the boss fight. Or to have the boss down to only a quarter health left and I end up dying. I’d like to see some meditation locations located closer to the boss fights or have something similar to the respawn mechanics that if you get through part of a cut scene in a boss fight but die later on in the fight it starts you at that cut scene rather than all the way back at the meditation location. I get that Respawn wanted to make it challenging but with how it is currently I am not the type of person to try it on levels higher than Jedi Knight, lol.

3. More cosmetics and customization. The customization on the lightsaber, Mantis, and Cal was a great idea but is very limited. There is not a very large selection of options. The digital artbook had some fantastic designs that I hope Respawn will add to the game.

So I was looking through the art book of Jedi: Fallen Order, and like some of these designs for Cal and his outfits are pretty amazing!! Take a look @MulehornGaming and @AnthemYour pic.twitter.com/I2ltjD0NMz

If you are a Star Wars fan, and even if you are not, this is a can’t miss game. It is absolutely the best single-player Star Wars game we have had since KOTOR. The combination of different game mechanics all rolled into a Star Wars game, and Respawn somehow making it their own really makes this game stand out. The story, lore building tied in along with the ending of the game was enough for me to say this should be the game of the year (although The Game Awards seem to have left them out, bogus). There are some great moments in the game between Cal and BD-1 and the other crew members and I couldn’t wait to finish the story. There are a few things I wish were in the game at release but the combat, mechanics, and story were enough to push those things aside for me. This game is fun, and I can’t wait to start my second play-through. The Force is strong with Respawn, and I hope to see DLC come out in the future.

At E3 2018 Star Wars fans had a new single-player Star Wars game dangled before their eyes. As our imaginations ran wild we finally got to play Jedi: Fallen Order, I was not disappointed. They deliver one of the best single-player Star Wars games since Knights of the Old Republic by merging some of the best things I like in other video games, and some how making it Respawn all wrapped up in a Star Wars Universe. This game is my Game of the Year even if The Game Awards did not include them in this year's nominees.
9.5