It’s been covered pretty widely that the lootbox-based leveling system in Star Wars Battlefront II missed the mark. Following the initial outrage and furor over the way that microtransactions were added to the game, EA made several hasty adjustments to the game’s economy — but with no long term plan. By contrast, it makes Destiny 2’s mod system look innovative and user-friendly. I don’t care for lootboxes in most games, but I’m not fundamentally opposed to them. However, the biggest impact the broken Battlefront lootbox system has is on the casual player like me that’s only really interested in space battles. 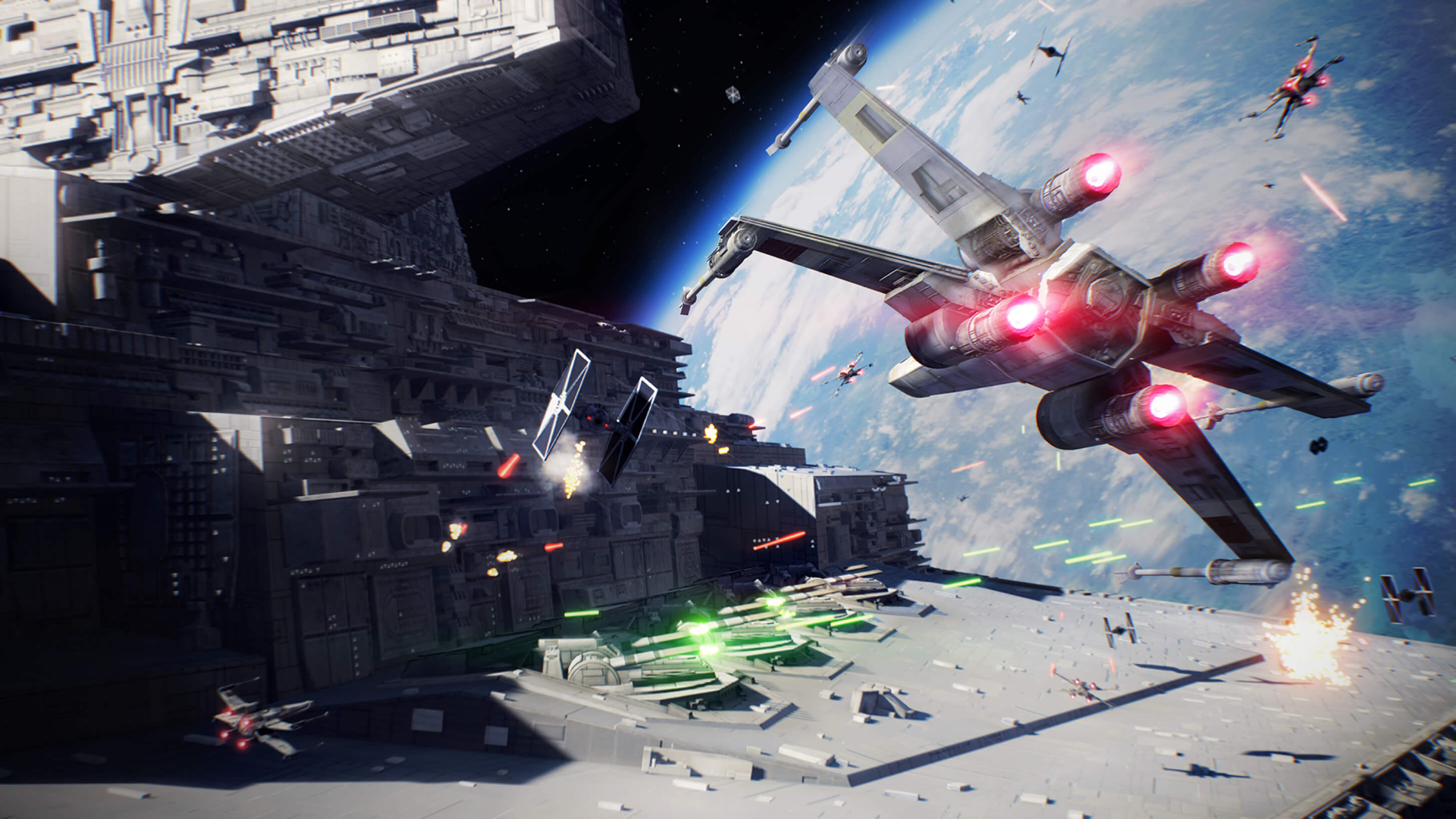 Let me be the first to admit that I typically suck in online PvP shooters. There is no shame in this confession – only an objective acknowledgment of the facts. But I’ll still play some of them from time to time because I like them. For Destiny 2, it’s because I want to get my weekly engram so I can maybe get a decent chest piece so I can finally hit max light level.

Star Wars Battlefront II keeps bringing me back because I love space flight shooters. As a kid, I grew up playing a vast library of flight sims. I started off playing Top Gun on my friend’s NES. Then, my dad brought home F22 Interceptor: Advanced Tactical Fighter for our PC. I learned tricky maneuvers, how to take off and land first on airstrips, then on grass in the middle of nowhere, and then even aircraft carriers.

Later, when we got a computer with a CD-ROM drive, it was Jane’s Fighters Anthology (which came with its own flight manual) that taught me even more advanced flight maneuvers, dogfighting strategies, and tactics. Then followed games like Microsoft Flight Simulator, X-Wing, TIE Fighter, X-Wing vs. Tie Fighter, Ace Combat, and today’s Elite Dangerous.

I don’t have much interest in playing ground assault missions since I’m not really good enough to be effective in most game modes. But, put me in the cockpit of a starfighter and I’m much more comfortable – even with the game’s irritating starfighter controls and the lack of support for a proper flight stick and throttle, including on the PC version. I love it.

That’s why the Battlefront lootboxes are so broken for players like me. The entire game is based on the idea that everyone just wants to play Galactic Assault and neglects the base classes in other game modes.

For example, the Starfighter lootbox is designed so that you are guaranteed to get at least 1 starfighter mod. However, in my experience, I’m far more likely to get a duplicate mod for a hero ship the game has already awarded me that I will probably be flying less than 5% of the time than any mod for the core Fighter, Interceptor, or Bomber classes. While I appreciate that the Starfighter crate is much cheaper than the others, it’s obnoxious that I never get anything of value to the ships I’ll be flying the majority of the time.

Take my Fighter class: X-wing, TIE Fighter and the like. I’ve finally been able to grind that class up to Level 3, yet I rely on that ship for most battle situations. Thankfully, my other ships are around Level 15, but that’s not due to any skill on my end. It’s just luck. Since the ability to craft upgrades to owned mods doesn’t unlock until the class reaches Level 5, there is literally nothing I can do except pray to RNGesus for 2 Starfighter crates with a basic Fighter mod in them – or, by some miracle, a green one.

And so, my enthusiasm for the game dwindles. In spite of its flaws, I like it. But the incentive to keep coming back just isn’t there. Do the mods do all that much to buff your starfighter? A little bit. I can certainly notice when a foe in a dogfight has a good mod equipped that increases my time to lock on, or if their blasts do a little more damage than others. I suppose I could just “git gud” and quit whining, but I’ve got a job, a family, and other games to play that are far more rewarding.

For all the deserved grief Bungie is getting for not living up to players’ expectations, I’m left wondering what’s happened to the criticism of EA’s broken economy in Star Wars Battlefront II, and whether we’ll ever see any meaningful improvements.

Anthem Lore – In the Beginning