The Sea of Thieves beta began on January 25, 2018, and a few of us at Mulehorn Gaming were able to check it out. Here are some impressions of the game after a few days of the playing the beta.

The view of my ship from an island mountain

The atmosphere and art direction in Sea of Thieves is fantastic. I was constantly stopping and taking screenshots while exploring islands and roaming the seas. Some may think the art direction is too cartoony, but I feel that it fits with the game really well. The water is also beautiful and some of the better-looking video game water out there.

Along with the visuals, the sounds are great. The sounds the water makes as you are wading through it makes you feel like it is real water. The music is also perfect for a pirate game. You have two different instruments that you can pull out and play. And to make it even better, if a crewmate pulls out an instrument and starts playing, it syncs with the song you are currently playing. I foresee a lot of fun cruising on ships and playing music while looking at the beautiful scenery.

The one issue I have is that the world feels empty. This may just be due to it being a beta, but there are not a lot of NPCs to interact with. The various islands also feel fairly empty and underused. It seems like there could be good stories there, but they are not present in the beta. Hopefully, the islands will have more personality in the full game. 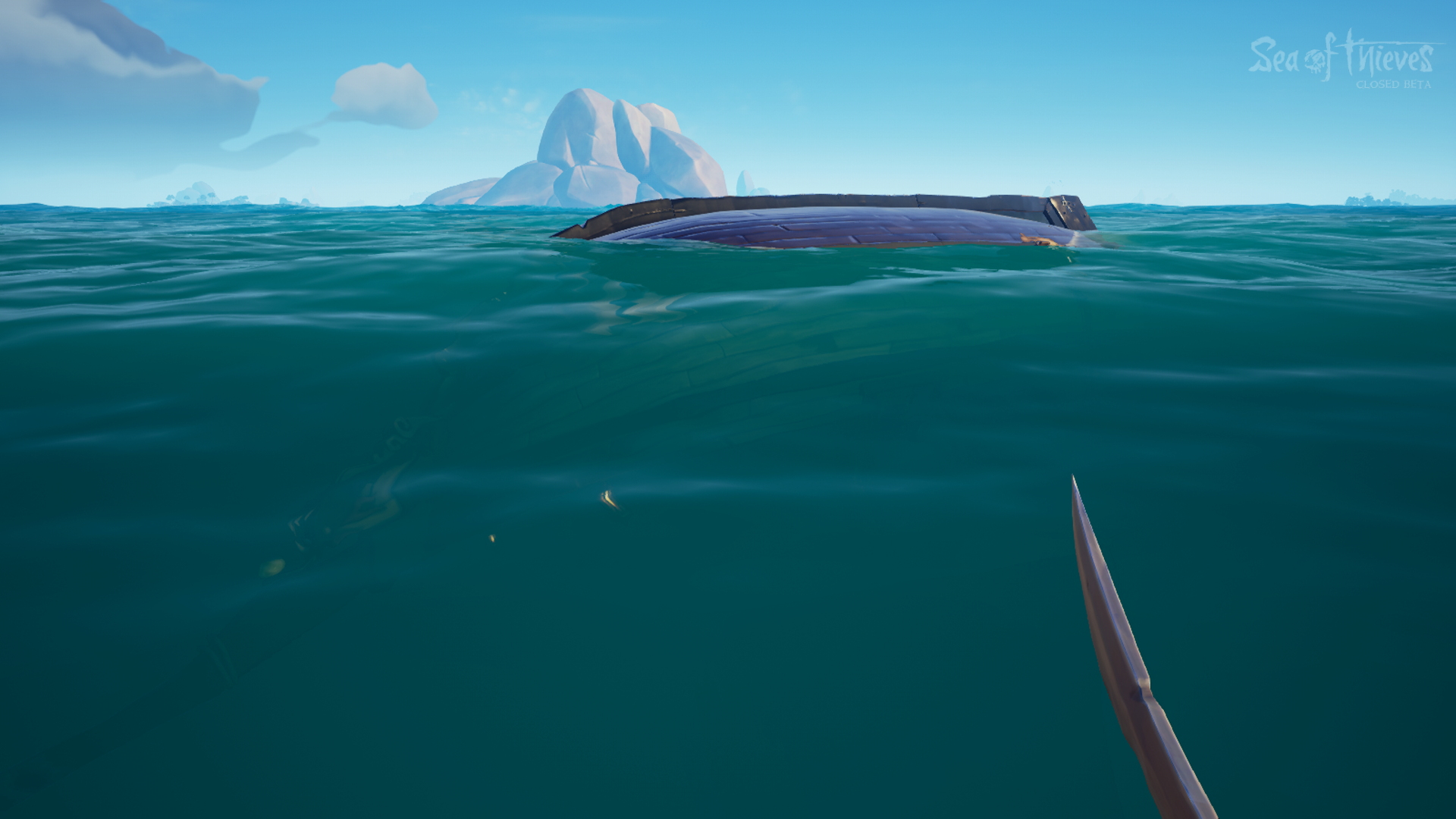 The sailing aspect of the game is fantastic and takes a lot of coordination. You need to set the length and direction of the sails, raise and lower the anchor, and have a separate navigator. The only map is away from the wheel, so someone needs to keep an eye on that while the ship is moving. Sailing ships feels good, and the authenticity of the water really helps make sailing a great part of the game.

Combat can be hit or miss. Guns do not have crosshairs, so aiming can be tricky and takes a lot of getting used to. You also need to be careful when using your pistol as it takes a long time to reload. Hitting a skeleton or another player can be difficult due to the way aiming works. I had times where I lined up a shot just to see it miss my target. Hopefully, some of this will be ironed out prior to the full release.

Quests generally consist of purchasing an adventure from a merchant and completing various steps. Some are long and have several steps, while others are shorter. You have to read the clues and look at maps to figure out where to go. It is a refreshing to not have a quest marker tell you where to go or what to get. It can be frustrating at times since the locations of chests are very specific. I do wonder how sustainable these quests will be though. All I can hope for is some variety during the full game.

Grouping Up With Friends 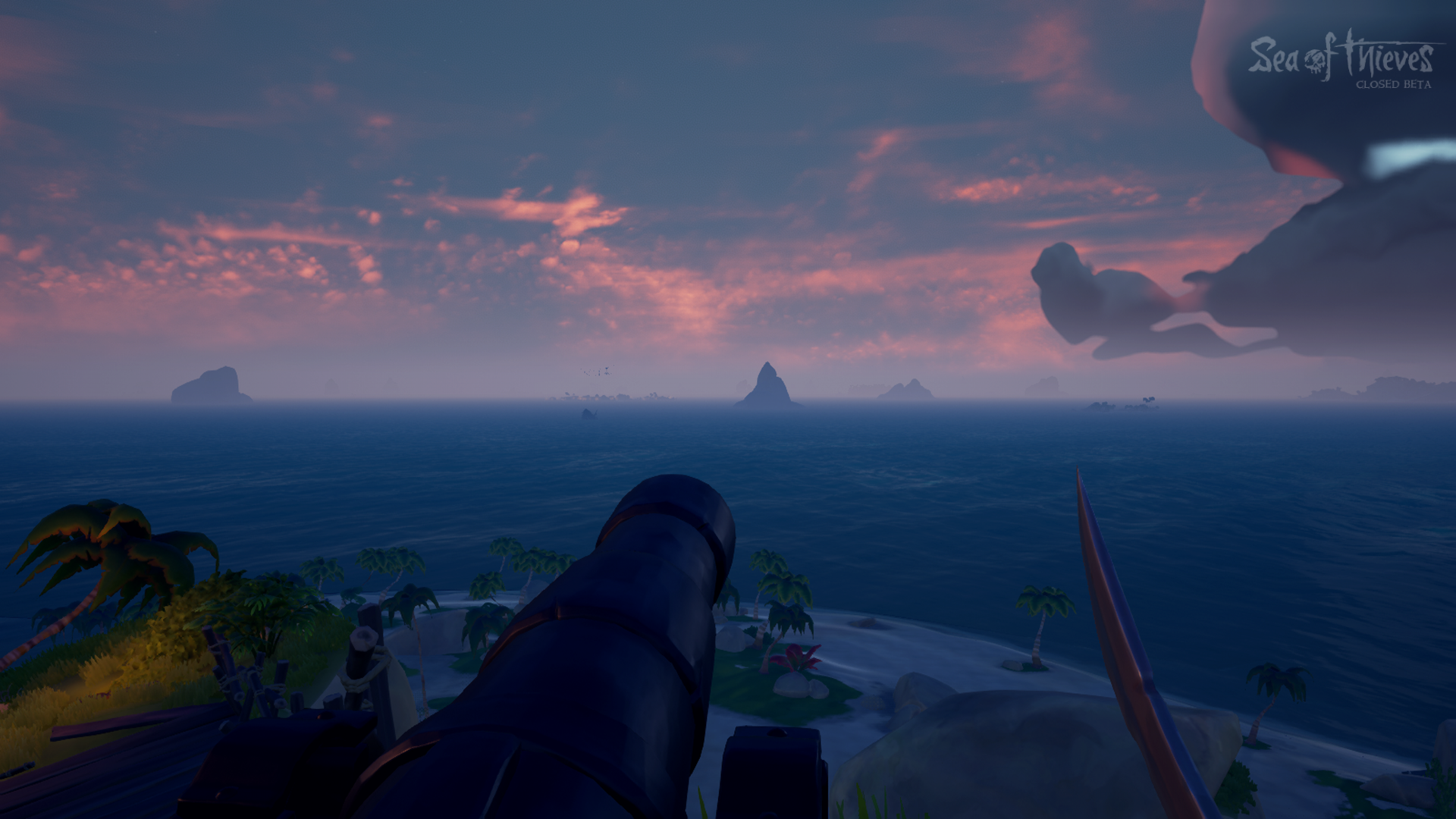 Dusk during the Sea of Thieves Beta

Games need to be fun, and the gameplay in Sea of Thieves is a lot of fun… As long as you’re with a good group. During the beta, I played both in a group and on my own, and playing with a group is a lot more satisfying. Sailing the ship is easier as you have more people to perform the different tasks necessary for sailing. A good, coordinated group is very helpful in combat with other crews, too.

The game also lends itself to shenanigans and just hanging out with friends. You can go on treasure hunts, chase other pirates, or sail around drinking grog. It’s going to be a great game to pick up and pal around with friends.

This game has a ton of potential. The gameplay and world is there, it just needs to be populated more, in my opinion. Playing with a group is a must as Sea of Thieves will be a great game to goof around with friends. As it stands, I am not sure if it is worth a full $60.00 though. Luckily, it will be part of Microsoft’s Game Pass when it launches on March 20, 2018. If the team keeps developing the game and adding more content, it could be a great game that stands the test of time.

Make sure to check out Mulehorn117’s Mixer stream VOD of his first outing of the beta. Let us know your thoughts down in the comments!