Rainbow Studios has brought us another installment of the high flying, car-crushing monster truck racing series, Monster Jam. Welcome to Steel Titans.  Race through12 different stadiums in Career mode or an open world stunt area in one of the 25 different trucks including Grave Digger, El Toro Loco, Doomsday and Northern Nightmare.

When you first fire up Steel Titans you will be dropped into the Monster Jam University open world free ride area.  Your tutorial will with simple gas, brake and reverse drills to ensure you get a feel for the handling properties of your base model truck.  After these drills, you will be left to your own devices to explore the free ride area for as long as you want to before either continuing on with the Monster Jam 101 courses or moving directly into the other game modes.  Monster Jam 101 will teach you the basics of all the skills you will need to master in your quest to become World Champion. 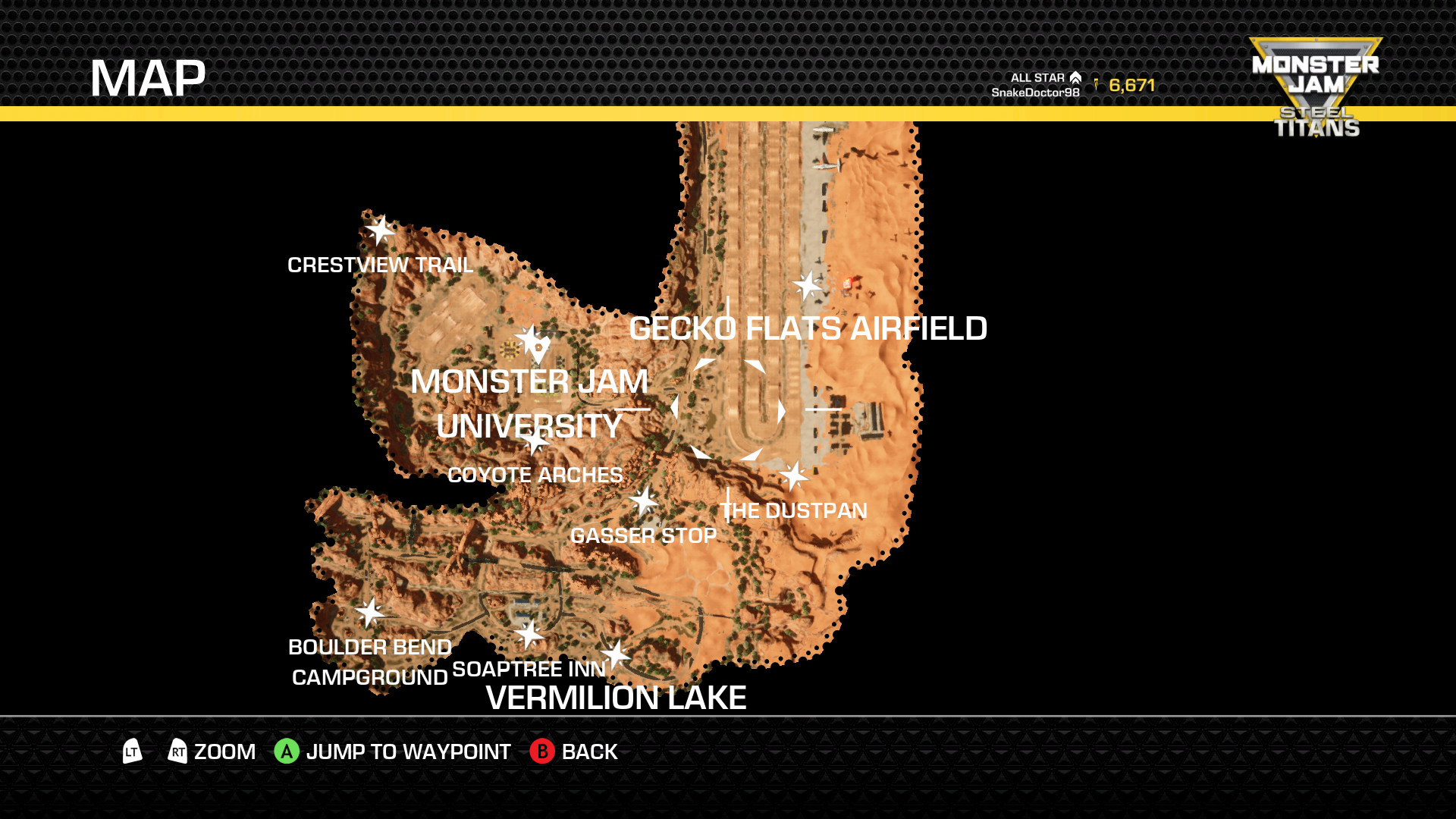 Career – Race your way from the Outdoor racing scene all the way to the World Championship.  Finishing 3rd place or higher will unlock the next series.  Each series will be a mix of Head-To-Head, Waypoint and Circuit Races, Two-Wheel Skills and Freestyle Events 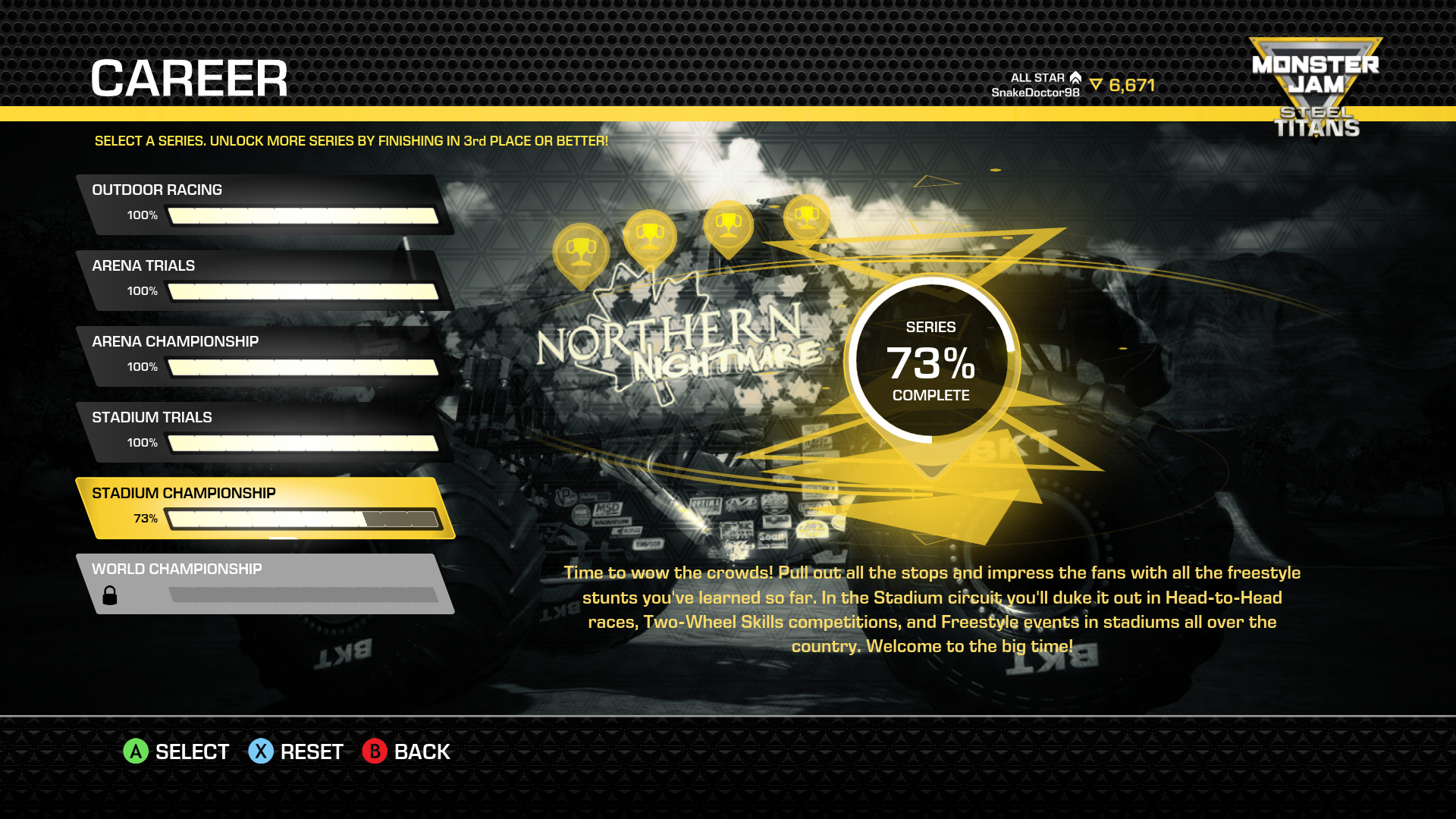 Photo Mode – hide the overlay, rotate the camera to any angle to snap some sweet action shots

Work your way to the title of World Champion and you will gain access to 25 different trucks such as Blue Thunder, Grave Digger, Megalodon and Northern Nightmare.  As you progress your career you will earn points which you can then spend on your trucks to upgrade Acceleration, Transmission, Suspension, Tires and Chasis.  You are also able to tune each truck to specific events such as Arena, Stadium and Freestyle. 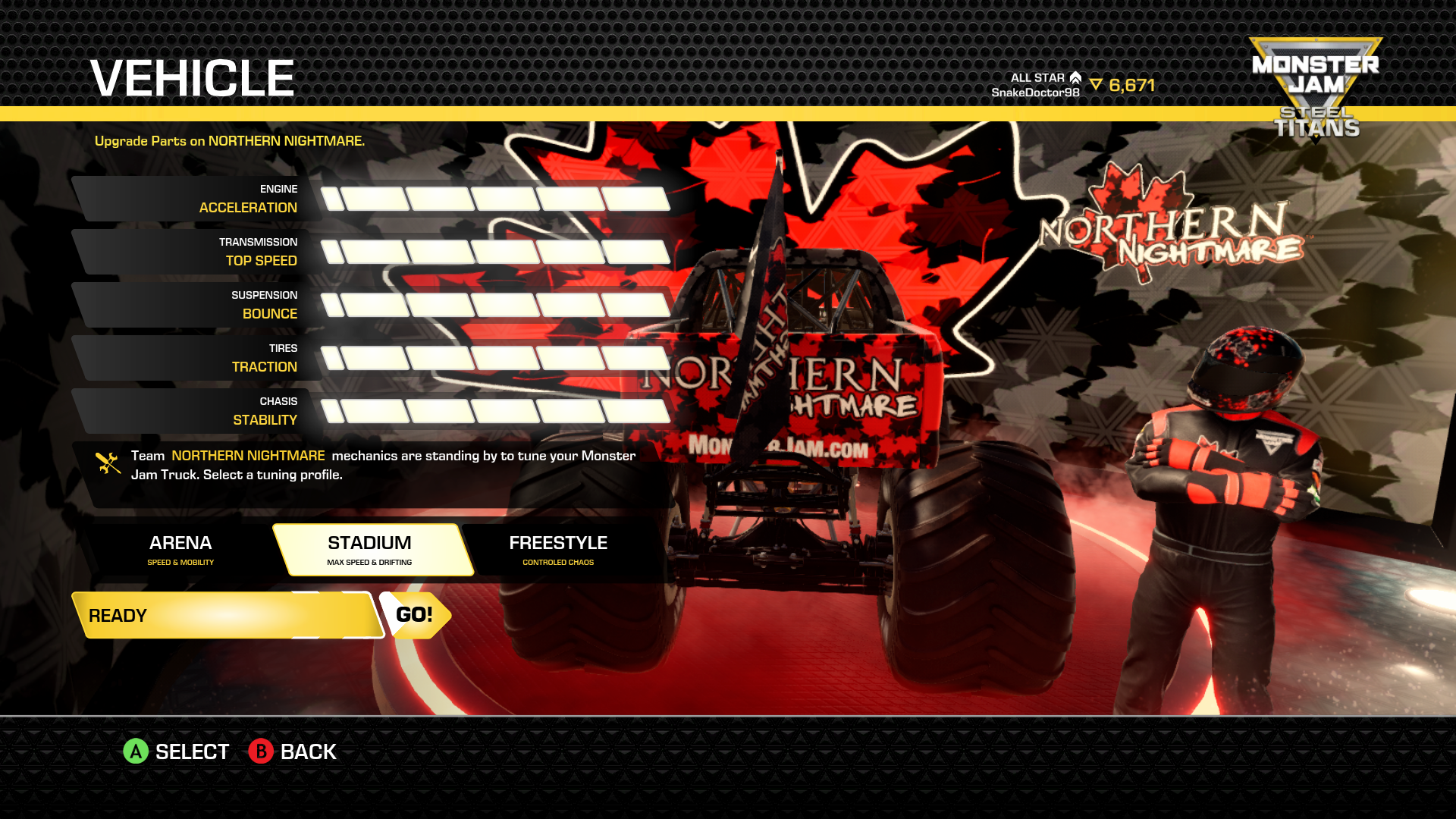 I had a lot of fun playing Monster Jam: Steel Titans, it was a blast to fire up one the many trucks, race around the track, crush cars and defy gravity.  I did have some issues with the AI opponents being ridiculously hard to beat on some levels and overly easy on others.  The physics can be a little wonky at times, but the gameplay is solid nonetheless.  My biggest issue with the game is the lack of online play.  A fellow streamer and I were provided early access codes by THQ Nordic.  We were all ready to co-stream our way through the events only to find that there was no way to do so.  There is 2 player couch co-op available in all modes however, I feel it was a major misstep not to include the ability to play with friends online.

Overall, I would recommend Monster Jam: Steel Titans to anyone who is a fan of the sport or racing games, especially if you have someone to play couch co-op with.  You will get a solid 8 -10 hours of gameplay from just the career mode with a fair amount of replayability out of the various quickplay modes.  It is available on Xbox, PS4 and PC for $39.99 CAD.