I stared anxiously at the clock waiting for it to strike 5pm. My plans for the night – run home, but on the way swing by the electronics store to pick up the Xbox Elite Controller 2. Already owning the first generation of the Elite, I was eager to get my hands on the newest iteration to see if it’s worth all the hype.

As part of my initial unboxing, I directly compared the new Elite 2 with its predecessor. One of the great things about holding the Elite series controllers in your hands is that they feel sturdy. According to my scale, the original Elite clocked in at 12.2 ounces – including the battery. One of the first things you’ll notice about the Elite 2 is that the battery is completely internal, putting it on par with other modern wireless controllers such as the PlayStation DualShock 3, DualShock 4, and the Nintendo Switch Joycons. The weight of the Elite 2 with the internal battery was 11.6 ounces – nearly a full ounce lighter, yet still felt just as solid the first Elite. 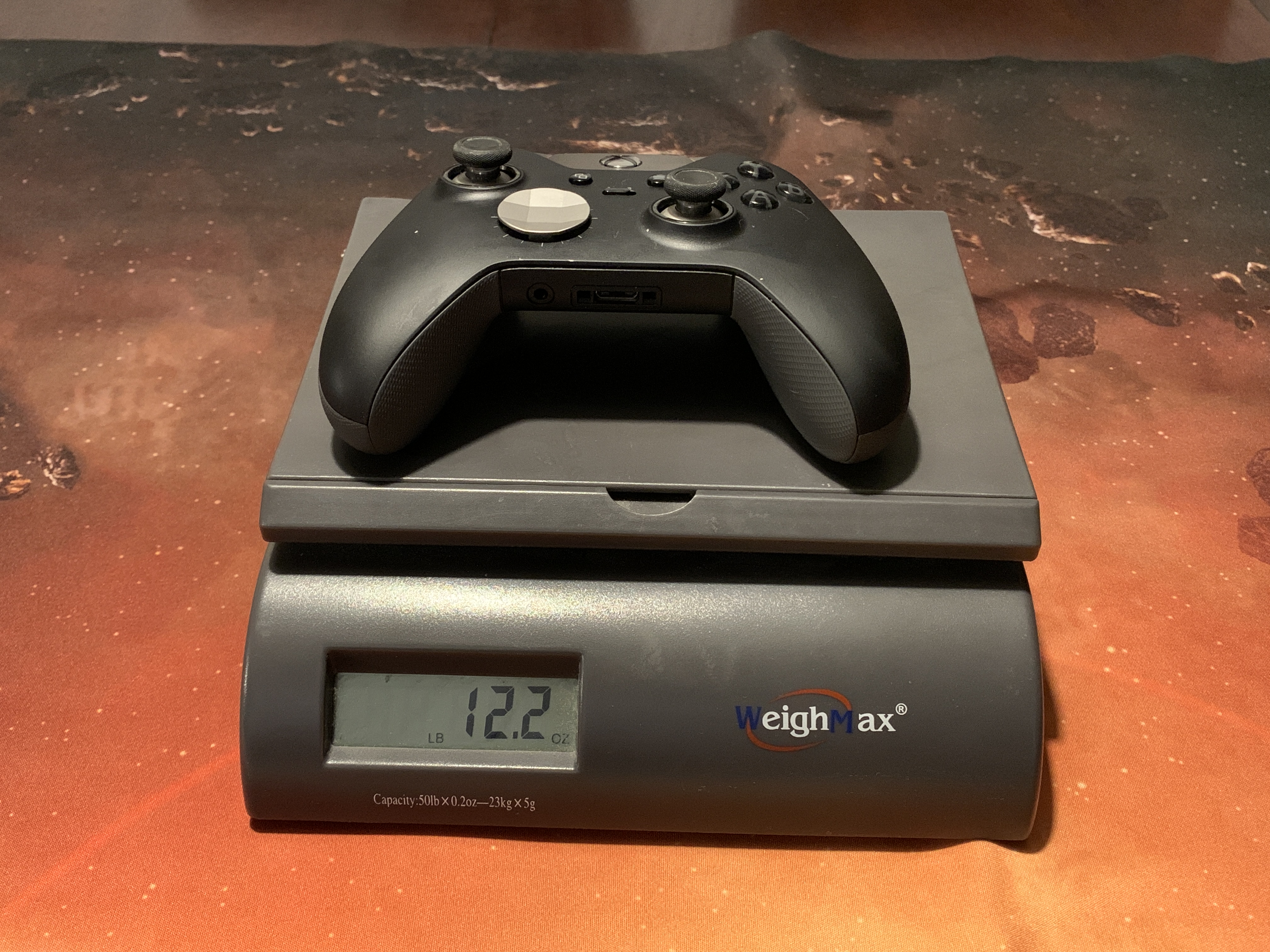 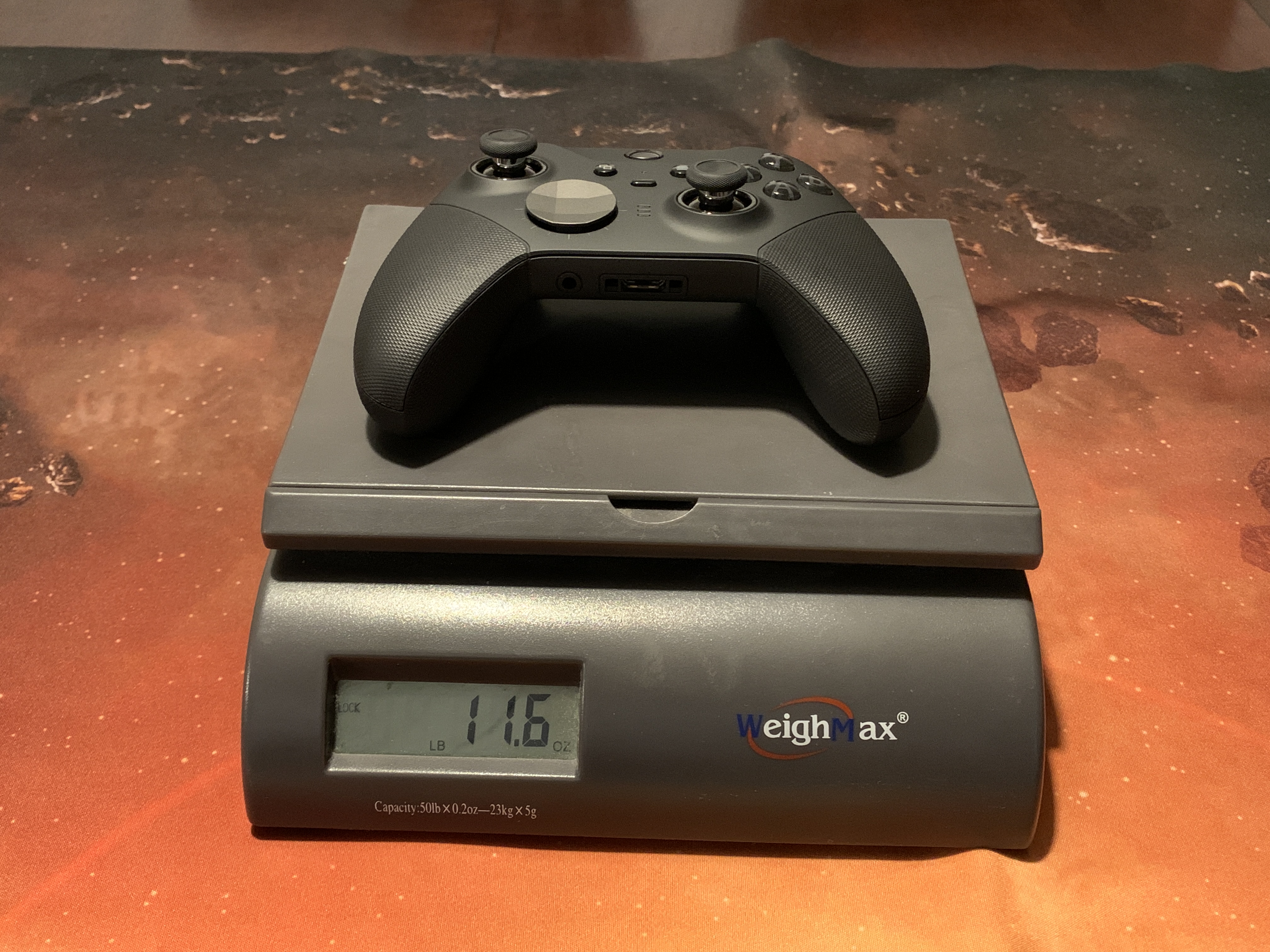 The Elite 2 comes with largely the same accessories as the first gen model. It includes a total of 6 swappable thumbsticks, 4 paddles, and a swappable d-pad or d-disc. One interesting accessory that’s exclusive to the Elite 2 is a “Thumbstick Key”. When you remove the thumbstick, there is an ever-so-small slot in the naked stem of the stick. But inserting the key and twisting, you can adjust the resistance of a given stick.

Another great improvement comes in the form of locking right and left triggers. Fans of the original Elite may already be familiar with this feature, where you can physically lock the distance that a trigger travels – especially helpful when rapidly firing a semiautomatic weapon in a shooter. The Elite 2 takes this all one step further by offering 3 separate lock settings. There’s no lock, allowing for full travel of the trigger. There’s the standard lock which to me feels identical to the lock on the original Elite. And then there is a new lock, which locks the trigger even higher, severely restricting trigger travel and allowing you to rapidly squeeze the button in sequence. 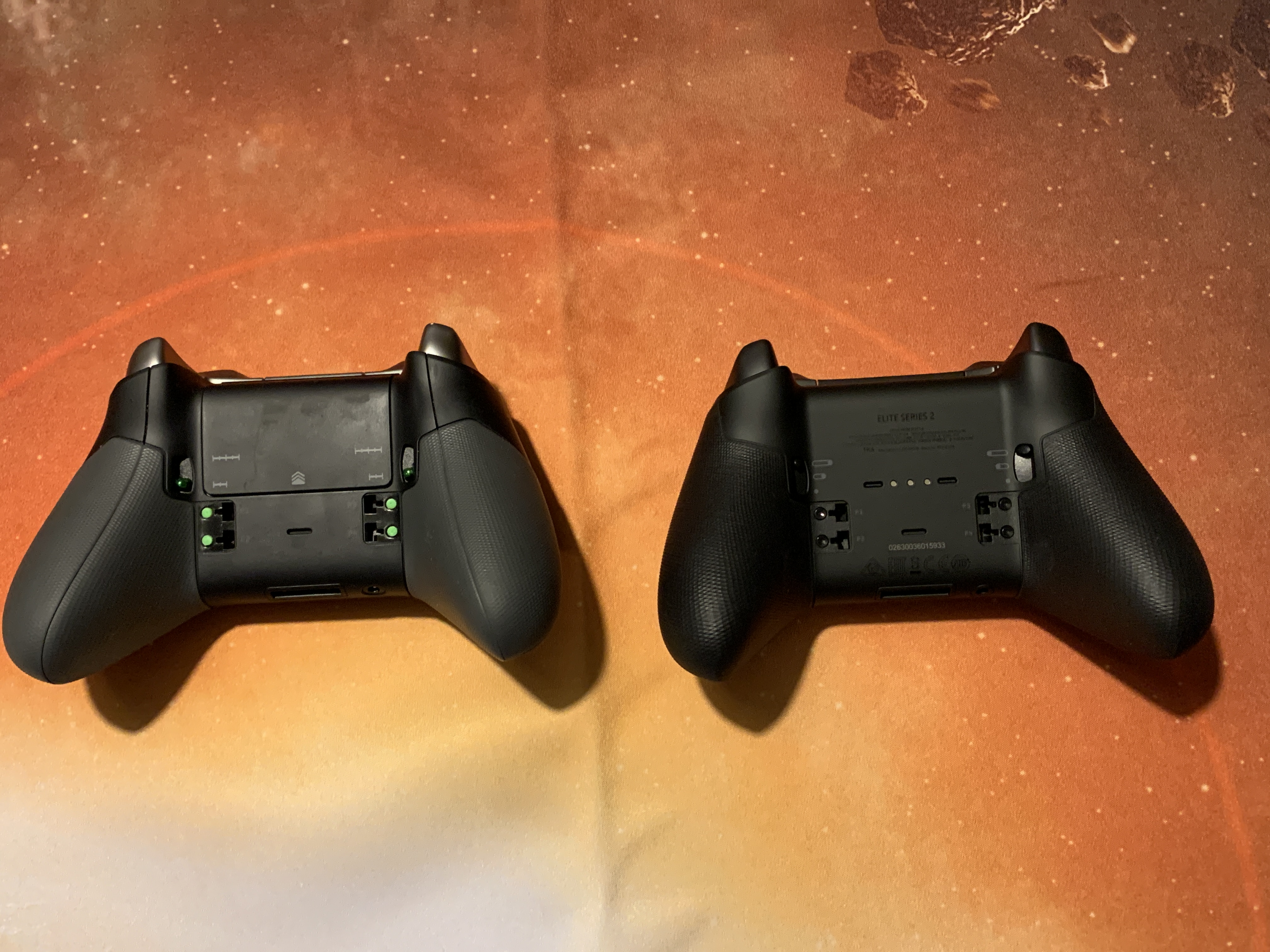 Both controllers come with a nearly identical carry case to keep your fancy controller hidden from the world, but there’s something very unique about the Elite 2’s carry case. The case has a small opening at the top allowing you to pass through the included USB-C cable to plug into the base of the carry case. This makes it so that as soon as you set your controller down in the carry case, it begins to charge. No more fumbling around with trying to get the Micro USB oriented the correct direction or trying to dock it on a cradle. 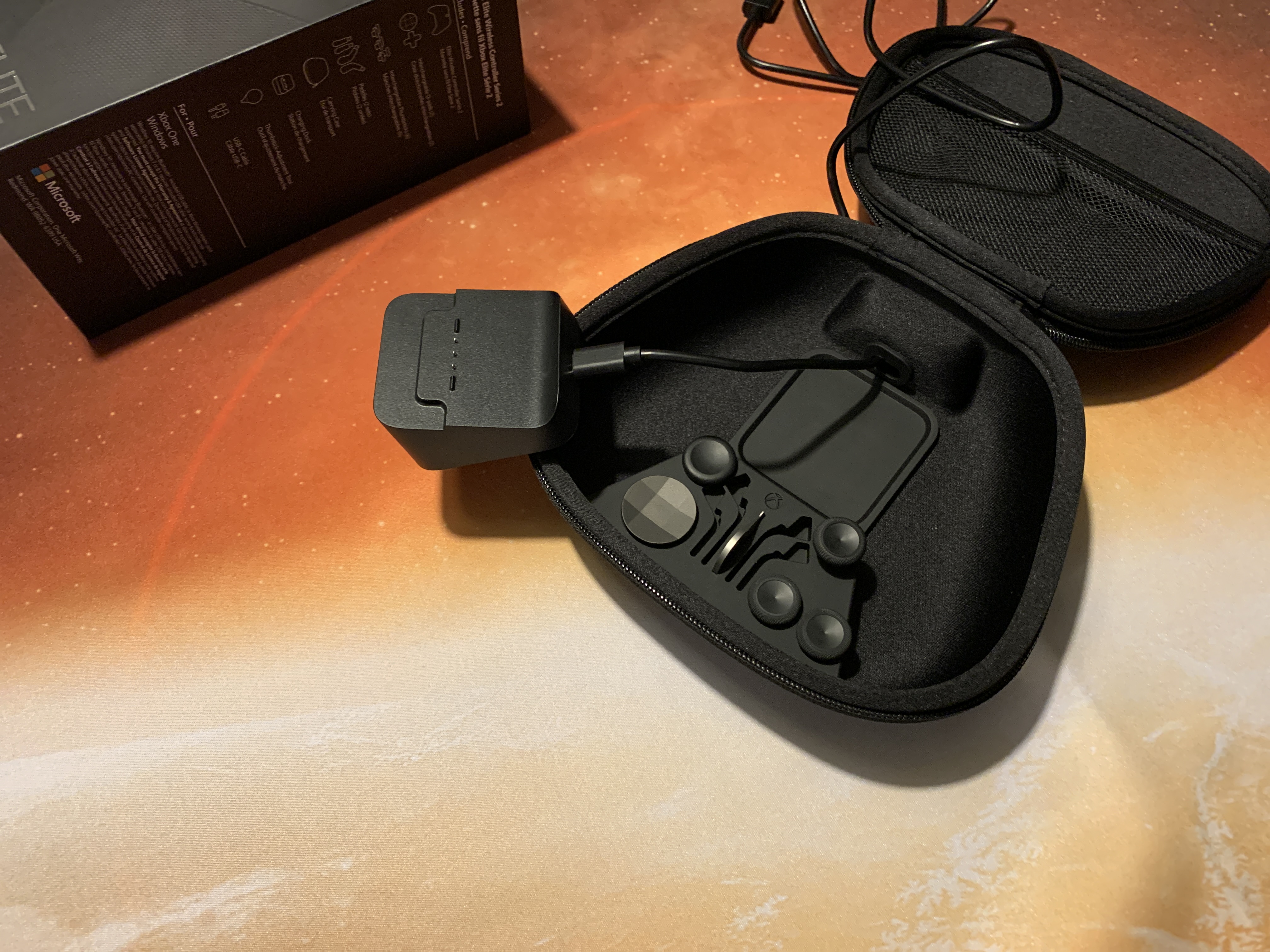 Removing the charger base from the case to demonstrate

Take It For a Spin

I took the new controller for a spin tonight playing the Haunted Forest in Destiny 2 and had a blast. The new rubber grips on the sides of the controller are very comfortable, and I felt that the controls and buttons were very responsive – though I can’t tell if that’s just because the controller is new, or if this is unique to the Elite 2. The paddles on the underside of the controller are slightly different lengths and shapes than in the previous generation, and the new configuration feels much more natural to me and made me less prone to accidentally striking a button I have mapped to one of the paddles.

Another minor annoyance is that while in the accessories package for the original Elite controller, 3 pairs of identical thumbsticks were provided of varying lengths and shapes of the top. With the Elite 2, Microsoft has made the conscious decision to mix it up, offering only 1 longer thumbstick, while the others are variations on the grip – ribbed, concave, or bulbed. I also found it difficult to close the carrying case with the single long thumb stick attached. The varying lengths seem to be offset by the ability to adjust the tension for each stick – which made it unnoticeable for me. But, if you’re the type of person that this will bother forever, typically some merchant will sell third party thumbsticks for the controller that may be more to your liking. However, I did like that even with a charger in the bottom of the case, my chatpad will still fit perfectly in the case. 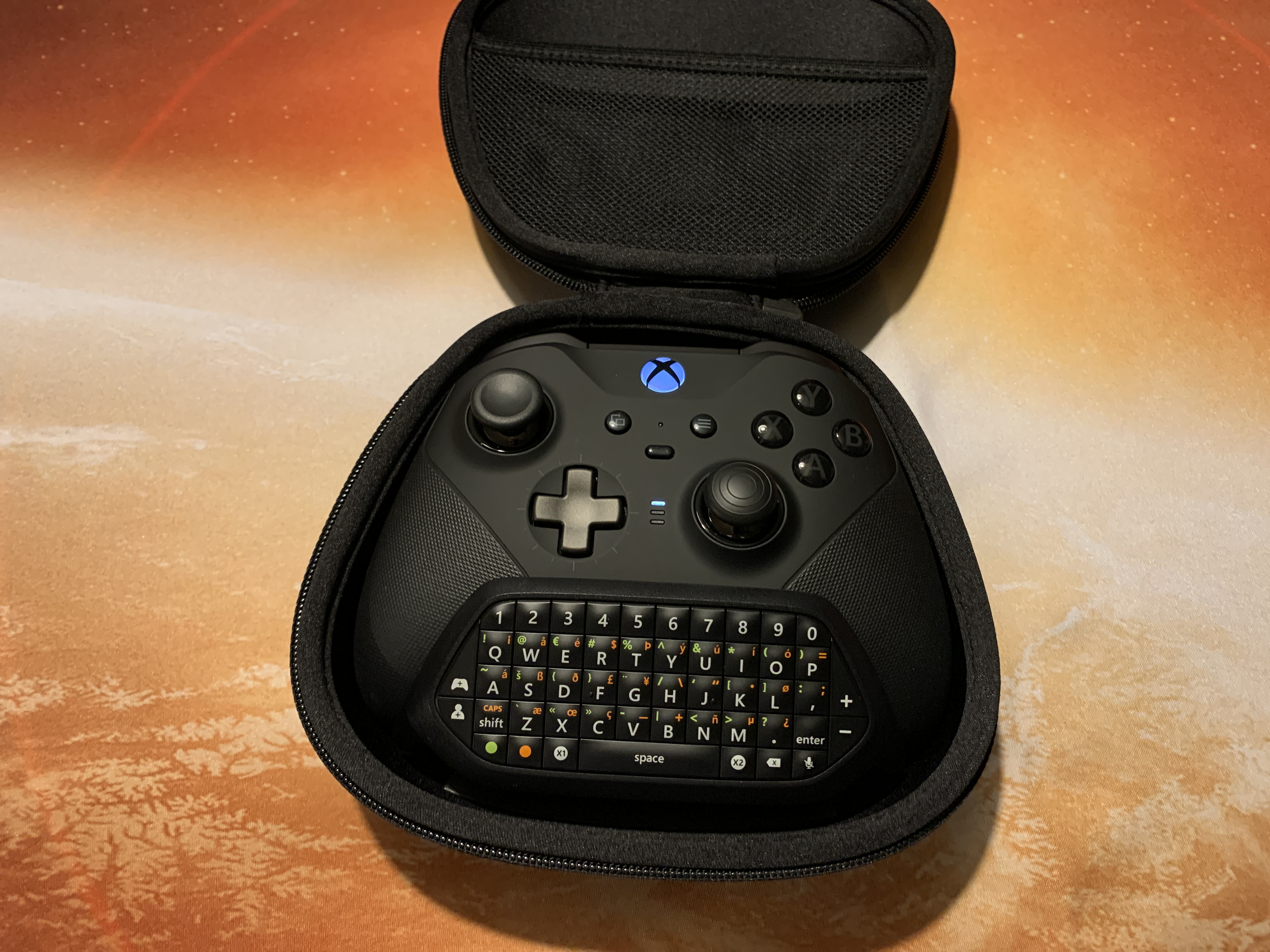 My new Elite 2, all snug in its case with its Chatpad

As best as I can tell without dissecting my new toy, the shoulder buttons feel the same as they do on the original Elite and most every other Xbox controller. I’ve heard several anecdotes from different people about shoulder buttons failing and needing to be replaced, D-Pads recognizing any keystroke as a double input, and thumbsticks failing – even on the elite tier controllers. It’s too soon to tell whether Microsoft has made any improvements on those fronts with the Elite 2, but given their track record I purchased the extended warranty to go along with the controller, as I myself have lost one to defect outside of the manufacturer’s warranty period.

If you’re looking for a significantly improved gaming interface, I would definitely recommend the Elite 2. If you’re one of the many folks with a broken or failing 1st gen Elite controller, I would also recommend the Elite 2, with the caveat that you may want an extended warranty until the device proves itself to be more durable than the last. However, if you’ve got a Gen 1 Elite that works just fine, you can probably skip this iteration – at least until it goes on sale. You can buy it now at Best Buy for just under $180, or maybe Santa will be very generous this year…