One of the things I like about indie comics is that you get stories outside of the Super Hero/Villain Realm. Stories like what we see in Going to the Chapel #1. In the debut issue by Action Lab Comics we see regular people getting caught up in some crazy circumstances that leave you at the page saying, “Ya, I’m in”. Going to the Chapel #1 drops this Wednesday, so take a look at what you can expect to see for New Comic Book Day! 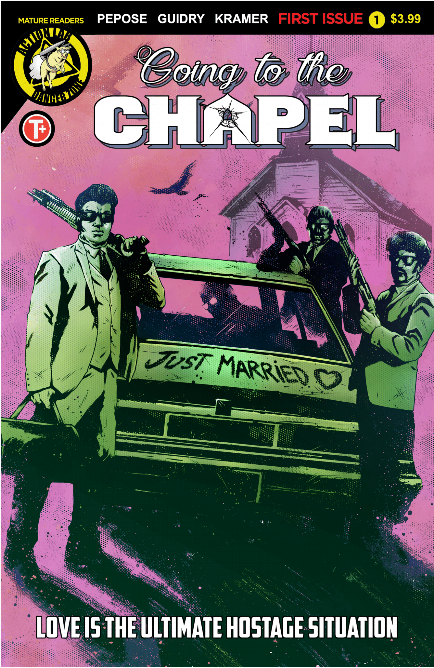 So what is Going to the Chapel? Think of a movie that one part Die Hard, one part Runaway Bride, one part Wedding Crashers, with the Bluth family (Arrested Development) for your cast, and have Quentin Tarantino direct it. Now you have a pretty good idea of what the writer, David Pepose, has created here. Gavin Guidry‘s is done very nicely, and I really enjoy how he captures the expression of the characters so well. It makes the dialogue of the story flow quite nicely.

Time to get “All Shuck Up”

We start off the big day, the precession song is playing and the bride is walking down the aisle, but something else outside the church is watching. That something is 4 shotgun-totting Elvis mask-wearing guys.  As it suggests on the cover, Elvis is not here to entertain. No, the gang is here for a heist. There is something in that church they want, and it’s not just a random wedding they are hitting up.

Shortly after the opening sequence, the book jumps to 4 hours prior and this is where we really get to meet Emily Anderson, the Bride to be, and her dysfunctional family. Emily’s father is a local CEO big wig and is barking demands at the vendors, while her mother is getting too friendly with the venue help. Then we get grandma, sitting in her wheelchair, on oxygen and smoking a cigarette, giving Emily some so sound marriage advice. She is one of those, no-filter-hard-around-the-edges-give-zero-f’s grandparents.  All the while Emily herself is having serious doubts about whether she can go through with this.

Now jump to two hours prior to the opening and we are that the bar with Jesse, the future groom, and his groomsman. He’s not celebrating as hard as his groomsmen and we get a little dialogue going before, a news broadcast catches the attention of several men at a nearby booth. News about not only the wedding but what item will be at this wedding of extreme value. Next thing we have is one of the men talking to Jesse. I really enjoyed this part, since we get a lot of foreshadowing with this dialogue and start to get an idea of who these other men are, unbeknownst to Jesse.

Now back to present, and the Emily, Jesse, and the Preacher are at the alter, vows about to be exchanged, Emily is hesitant then BOOM! Elvis enters the building! The Elvis gang shows up for the heist, much goes as you would expect with wallets, purses, and valuables collected. In the midst of this, grumpy-ass-granny hits her Life Alert bracelet, and local authorities are now about to get involved. The last few pages really tie in scenes from the bar and set a new tone for the story and what looks to be a showdown.

I really feel that David Pepose and Gavin Guidry have put together a great book here. David’s writing hooks you into the characters and how they interact with each other, all the while weaving a story from different times in the day. All of which come together at the end for a surprise twist going into the next issue. Gavin’s art while simplistic at times really captures the expressions of the characters and makes the action panels really come alive. All in all, if the next issue follows suit, I can see this being another one of those indie books that gets optioned to tv/film. Going to the Chapel #1 hits the shelves September 4th, be on the lookout!