Ghost of Tsushima was received by the gaming world with resounding applause. The game’s story, gameplay, and technical aspects are quickly solidifying this title as one of the best to grace this console generation.

Ghost of Tsushima has a story that grips players from the opening scene. The passion and honor of Jin Sakai are abundant throughout the title, and each piece of the story holds credence to this. From the main story missions to the smallest of sidequests, Ghost of Tsushima’s story is riveting, emotional, and engaging.

The main plot follows Jin as the last free Samurai in Tsushima, on a mission to both save his home and his uncle from the invading Mongols. Along the way, he meets allies, old friends, enemies, and random NPCs who vie for assistance. It is these connections that allow Jin to continue towards his goals. The main quests and side quests feel very rarely like chores, and all touch the soul in one way or another. Whether related to loss, family, memory, or honor, the side quests feel part of the bigger plot, making it hard to pull away from just exploring. 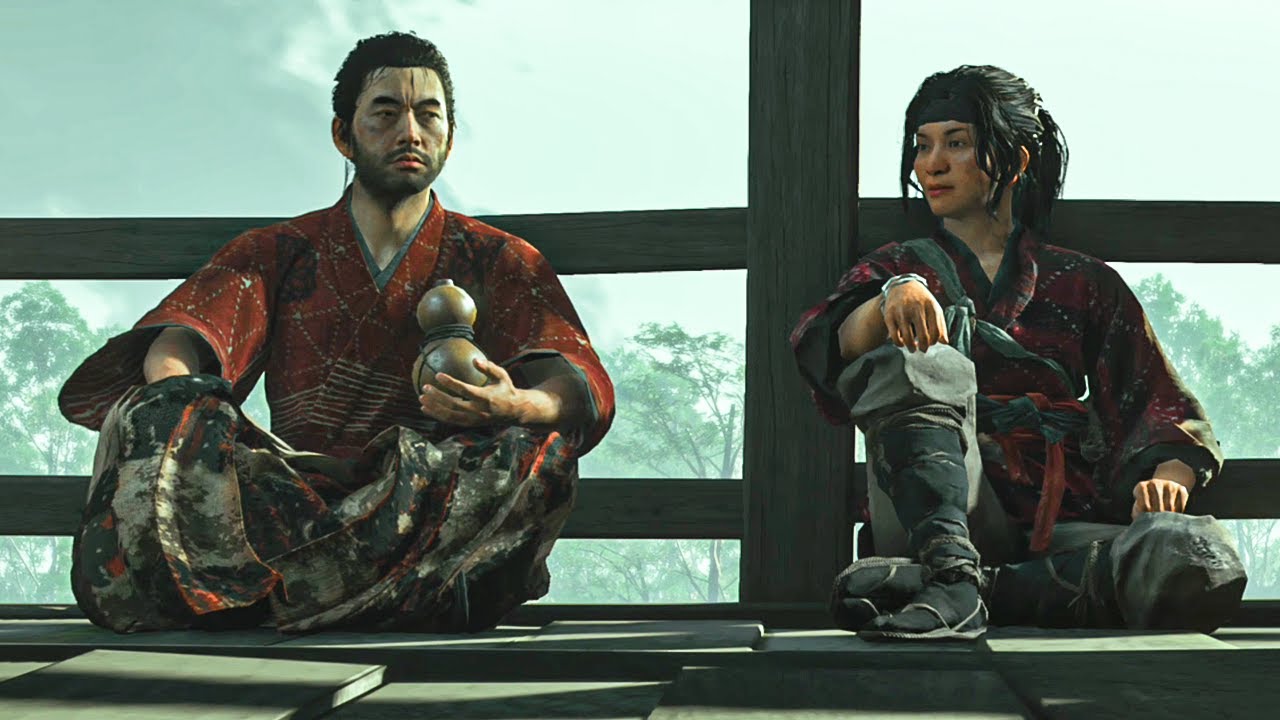 The other story point in the game is Jin’s internal dissonance in how he has to change his fighting style and go against the Samurai code to beat the Mongols and their barbaric tactics. He earns the title the Ghost by the people around Tsushima as he lays waste to their invaders from the shadows. Players are given a front-row seat to the protagonist’s dilemma and experience the conflict within Jin throughout the game’s length.

The gameplay in Ghost of Tsushima is fluid and peaceful. Even the combat has a sense of rhythm and symmetry that makes it serene. The mechanics for exploring are just as smooth, making traversing the world of Tsushima enjoyable, relaxing, and a pure joy. The absence of a HUD, which yields a reliance on the environment, makes gameplay immersive in a way not seen in many other games. Between combat and exploration, the gameplay is stunning all around.

Combat begins early in this game, featuring a tutorial and prologue meshed into one experience. Once the basic melee fighting style including light and heavy attacks, and blocking and parrying are learned in the prologue, opportunities to learn new fighting stances emerge and the player can begin to harness new techniques that are strong against a variety of foes. There are four fighting stances to learn. Stone, Water, Wind, and Moon, each potent against particular foes. Switching between them mid-battle feels fluid and it’s easy to feel like a master Samurai very quickly. 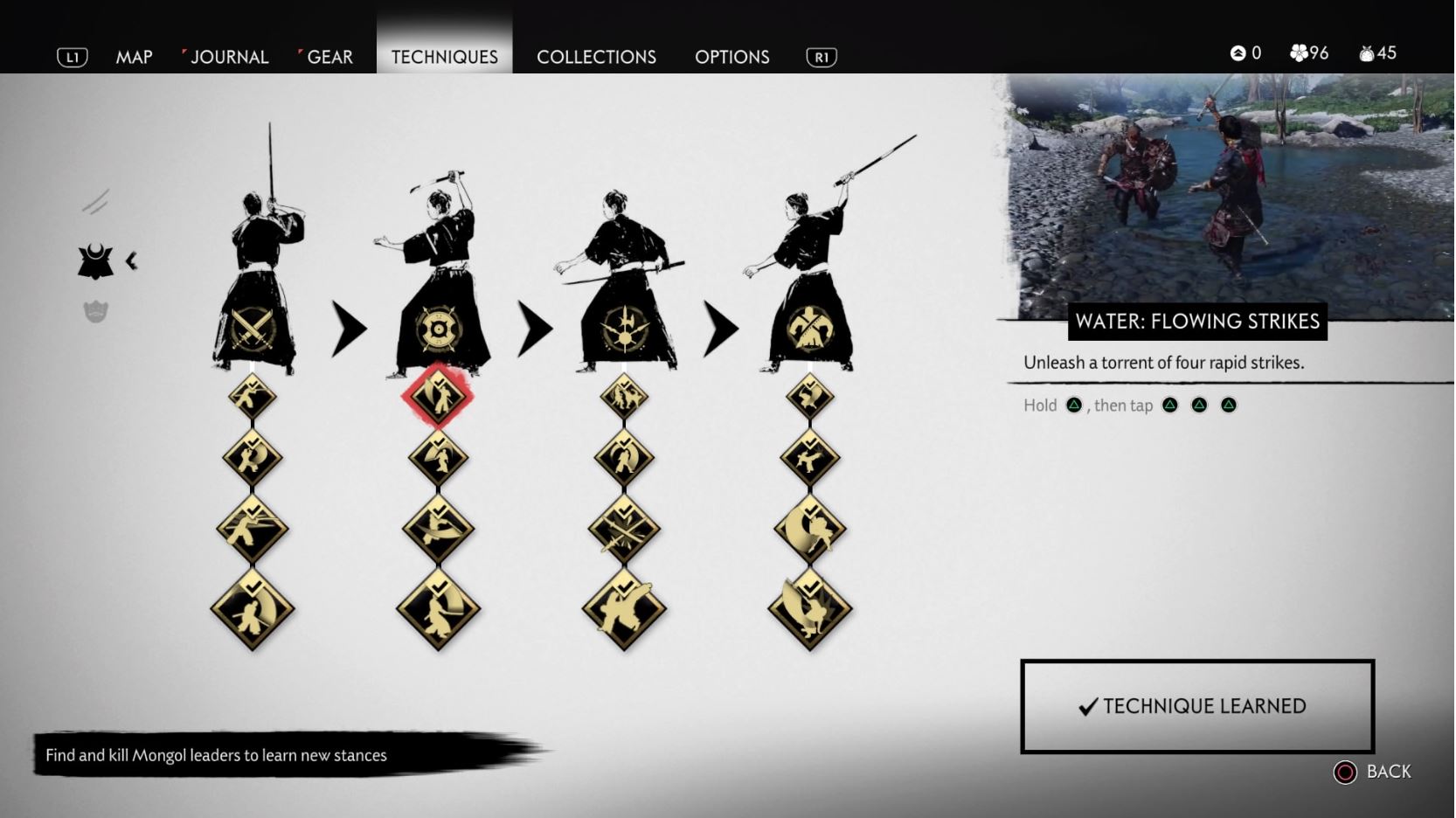 Stealth gameplay features a similar fluidity, but these are experienced from the shadows and other vantage points. The game features a familiar mechanic to many games nowadays; tall grass that Jin blends into when crouched. From the tall grass, several stealthy combat techniques can be perpetrated. Bow and arrow, assassinations, and throwing knives are among the first few acquired as Jin takes his first steps towards becoming the Ghost, and many other tools and techniques are acquired along the way. The game allows players to choose how they want to fight – Samurai or Ghost – in almost every combat situation, adding to the immersion and individuality of the gameplay.

Exploration in Ghost of Tsushima is perhaps the most impressive feature of the title. The world is a visual masterpiece, full of activities, points of interest, NPCs, and random enemy patrols. Yet, it all manages to remain relaxing and serene regardless of engagement. There are collectibles, such as Mongol artifacts, records, singing crickets, and more, as well points of interest with interactive qualities such as hot springs, areas to create haikus, shrines, fox dens, and beyond. These interactive quests enhance the aesthetic of Ghost of Tsushima by ingraining the culture of the Samurai and the Japanese people into the game. The most hours spent in Ghost of Tsushima may be in the exploration aspect, as those looking to obtain 100% of the achievements will be spending a lot of time doing just that – exploring.

Ghost of Tsushima has, as mentioned, some of the most visually stunning graphics gaming has ever seen. The attention to detail is a feat of its own. The technical side of this title is astonishing, its climax in that of the other-worldly photo mode. Ghost of Tsushima features other amazing technical feats, including a variety of modes in which the game can be played: Standard and Subtitled modes, Samurai mode, and Kurosawa mode. Also, the soundtrack and sound mixing add to the immersion that defines this game as one of the best of this generation.

The modes that the game can be experienced in add their own sense of technical marvel to the title. Standard and Subtitled modes feature the game in the more familiar mode for many gamers: natural color grading and English dialogue and subtitles if interested. Samurai mode maintains the natural color grading but changes the dialogue to Japanese. Unfortunately, the visuals are dubbed for English, so there will be sync disparities between lip movement and dialogue in this mode. Finally, Kurosawa mode allows players to experience the game in a grainy black and white filter that replicates old Samurai movies. There is literally an option for all kinds of fans of not only gaming but the Samurai genre. 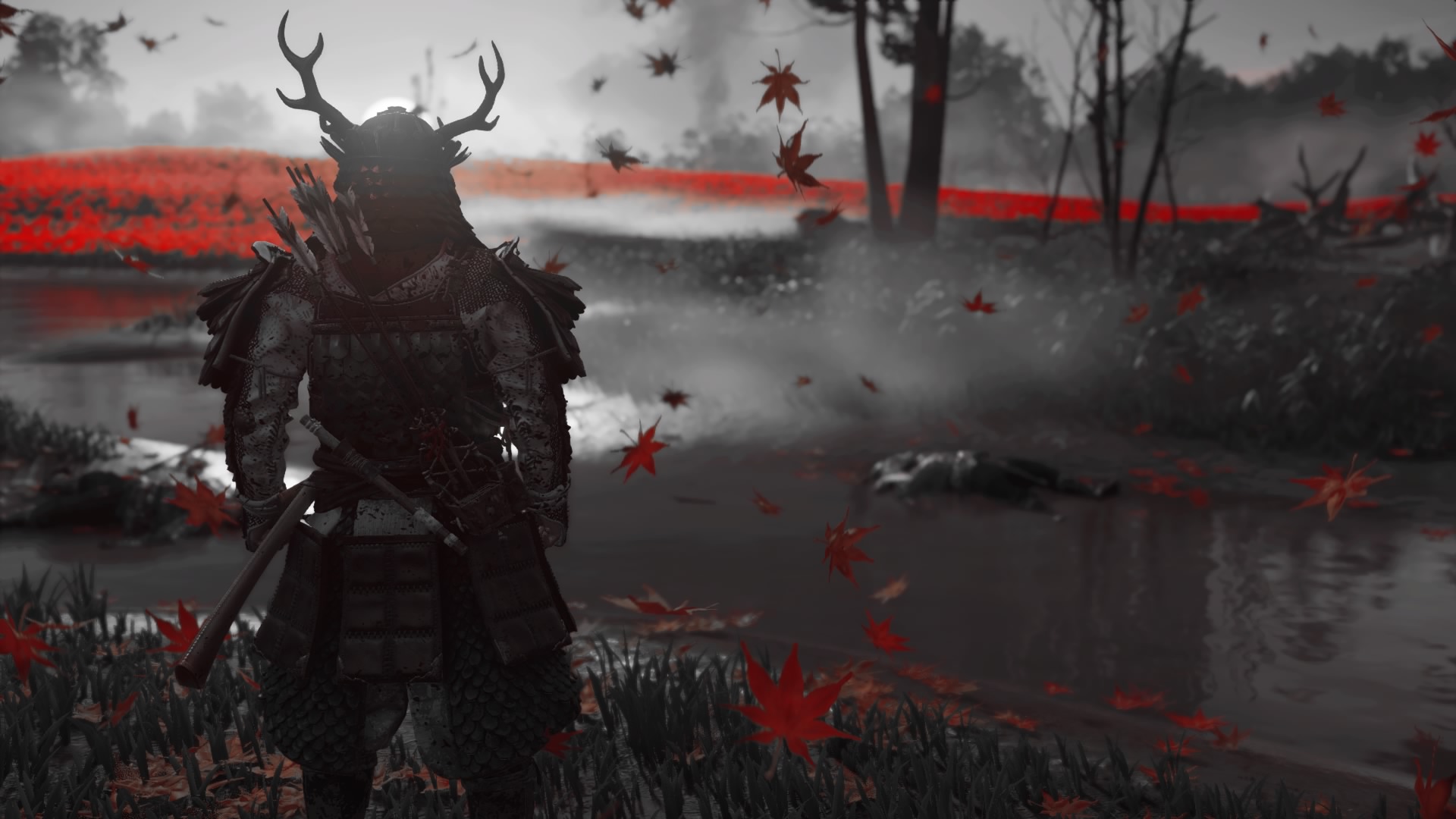 The photo mode cannot go unnoticed in any review of Ghost of Tsushima. There are few games that can make every inch of the map look beautiful enough to capture in photo mode, let alone add the customization and offer the editing options that this title does. There have been some absolutely gorgeous photo mode captures shared across the internet, and with good reason. There are hundreds of editing combinations that can be put into a capture; all beautiful, and all highlighting the momentous achievement this game has to offer.

Ghost of Tsushima is a near-perfect gaming experience. The storytelling prickles skin at the right times, the combat allows the player to feel like a Samurai, and the aesthetic leads players deep into the immersive world of Tsushima and Jin’s story. I rarely wanted to put the game down, and when I did, I was thinking about when I would be able to pick it back up. Ghost of Tsushima’s story is a commentary on internal dissonance of who we are and who we are meant to be, and it allows players to experience this delicate struggle through Jin’s trials and tribulations. All but seamless mechanics make this title a pure joy to play, whether in combat or in any of the other countless interactive activities throughout the map. Ghost of Tsushima will be a Game of the Year contender, and forever a top title of the current console generation.

Ghost of Tsushima is one of the best titles of this console generation. Its storytelling and visuals are among the best to grace screens in gaming ever. Combine that with the immense attention to detail and unrivaled immersiveness through the game’s exploration and combat, and Ghost of Tsushima proclaims itself as a worthy Game of the Year title. For those hungry for a top tier RPG experience, do not pass on this title.
9.8