During Gamescom 2019 we got the chance to play Bleeding Edge, an upcoming Hero , umm, Brawler by Ninja Theory. The developer behind the Devil May Cry series and Ninja Theory. Bleeding Edge is a 4v4 fast-paced PvP game that combines Combo mechanics with 3rd person action and Hero abilities.

We started off our demo with a quick tutorial that helped us understand the controls, it was all pretty straight forward. But it gave us some insight into how you battle in the game. You have your basic combo with x-x-x-x (x is your basic attack) and an a (hold)-x (a is jumping). And then you have 3 abilities that have individual cooldowns. And of course, the ultimates that pop up once every so often. After the tutorial, we got some time in the Dojo where we got to try out different characters.

Bleeding Edge offers 3 classes, DPS, Support, and Tanks. Each character has their own set of abilities and 2 ultimates to choose from at the start of the match. Most of the characters are melee damage dealers with the exception of two healers which can shoot from a distance. There are also some abilities that have ranged effects. At the moment the game offers 10 characters, 4 DPS, 3 Support and 3 Tanks. But the devs told us they will have a full roster of 12 characters at launch.

Some of the characters have abilities that can be cast on yourself or on an ally, this is easily done by either pressing the ability button once or tapping it twice. Then there are the abilities that can be set on the ground, like a wall that blocks incoming enemies. When you hold the ability button you can move around with the Right-Stick and place it. All pretty straight forward but clever controls which add to the overall fast-paced action of the game.

Furthermore, the characters also have stamina, depending on the class, or character you have either 2 or 3 stamina bars which are used when you want to escape. By pressing RT you swiftly dash away into the direction your facing, this can come in handy when an enemy has you locked down in a combo of basic attacks. 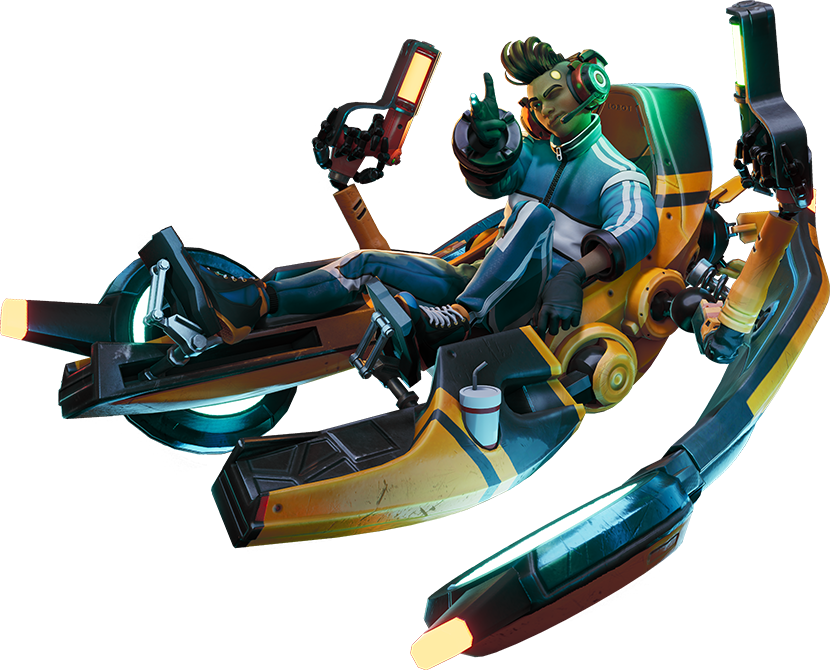 During the demo, I played as Zero Cool, he is a mobility Healer that rides a type of racing car. He is pretty squishy but has a great escape as he is the only Hero that can use a double jump to fly out of a nasty situation. Flying as Zero Cool will gradually drain your stamina bars. Zero Cool is a true Supporting character being able to place a healing beam on an ally and dropping a digital wall at any place around himself to guard off incoming attackers.

A good healer can keep a team alive during tough team battles, communication and teamwork are key in surviving these battles and securing victory in the end. During our demo, we did really well and were already at 400 points from a total of 500 needed. But out of the blue, the enemy team figured out it was in their best interest to target the healer, me, to assure victory in the team battle. Once they took care of me the rest of the team swiftly followed. It shows just how important team synergy will be in Bleeding Edge and that it’s important to protect the squishies!

According to the Devs, the game was still in Alpha, the game played really smooth and it did not feel like an Alpha at all to me. As of writing there is no official release date announced yet, but you can sign up for the technical Alpha over here: https://www.bleedingedge.com/en/signup