The Penultimate episode of Game of Thrones delivered an explosive episode with the deaths of many of the remaining characters. Daenerys is reeling from the beheading of Missandei last week and showing signs of becoming the “Mad Queen.” As always, there will be spoilers for the fifth episode of Season 8, so read on with care.

The Calm Before the Storm 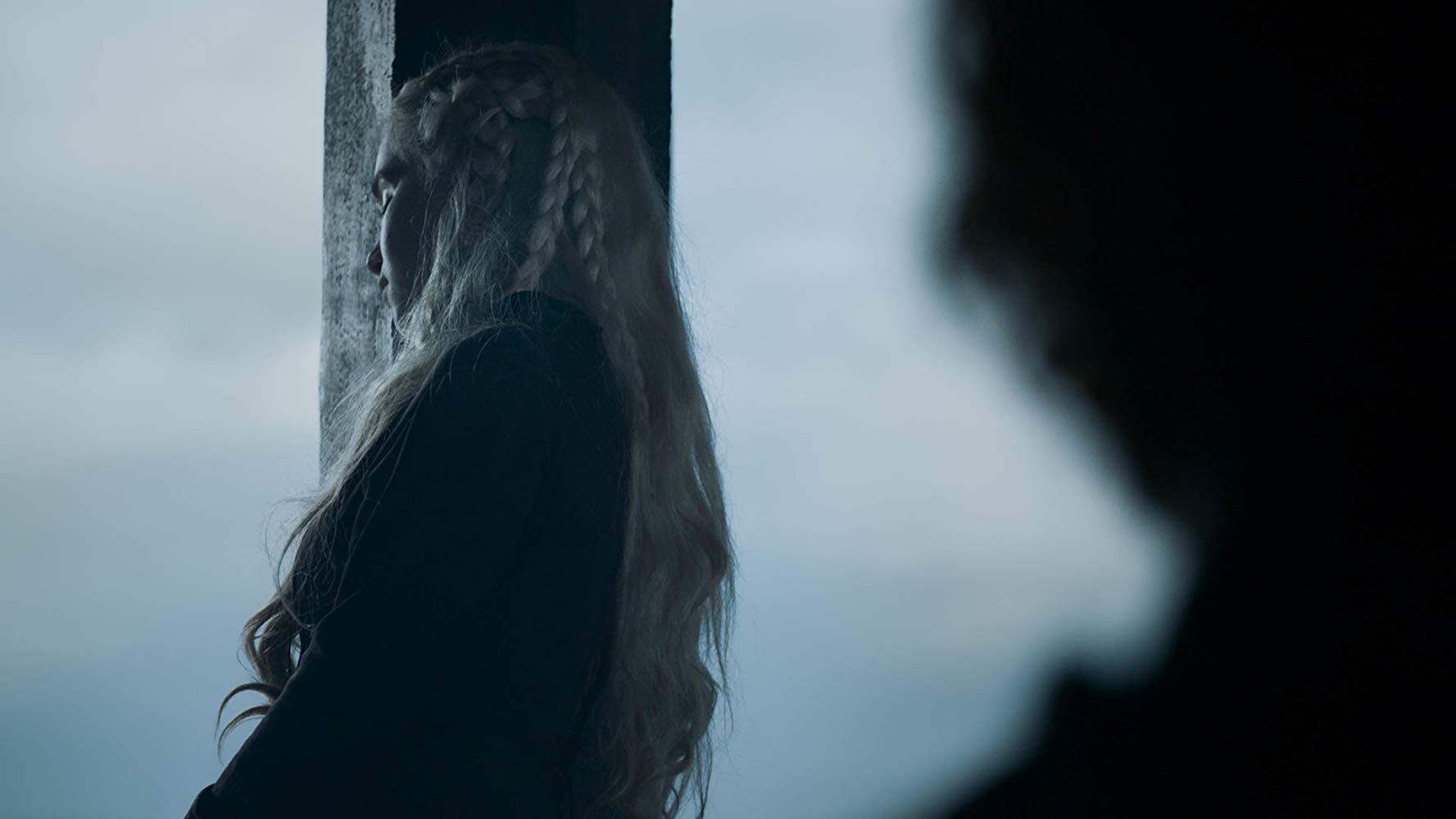 As the episode opens, we learn that Daenerys hasn’t eaten in days and is brooding over the loss of Missandei and the perceived betrayal of Jon. She knows that Tyrion and Varys know about Jon’s lineage and blames Jon for it. Varys is actively trying to undermine Daenerys by sending ravens off describing who Jon really is. Daenerys finds out and has him burned for treason. He stayed strong throughout the process and did not waiver in the sight of Drogon.

Jamie is captured trying to enter the city and Tyrion visits him in a scene reminiscent of when Jamie visited Tyrion in jail at the end of Season 4. Tyrion releases Jamie and convinces him to get into the city and get Cersei out so they can sail away and save their baby. It’s a desperate plan but Tyrion knows that there is no escape for Cersei.

The Sacking of the City 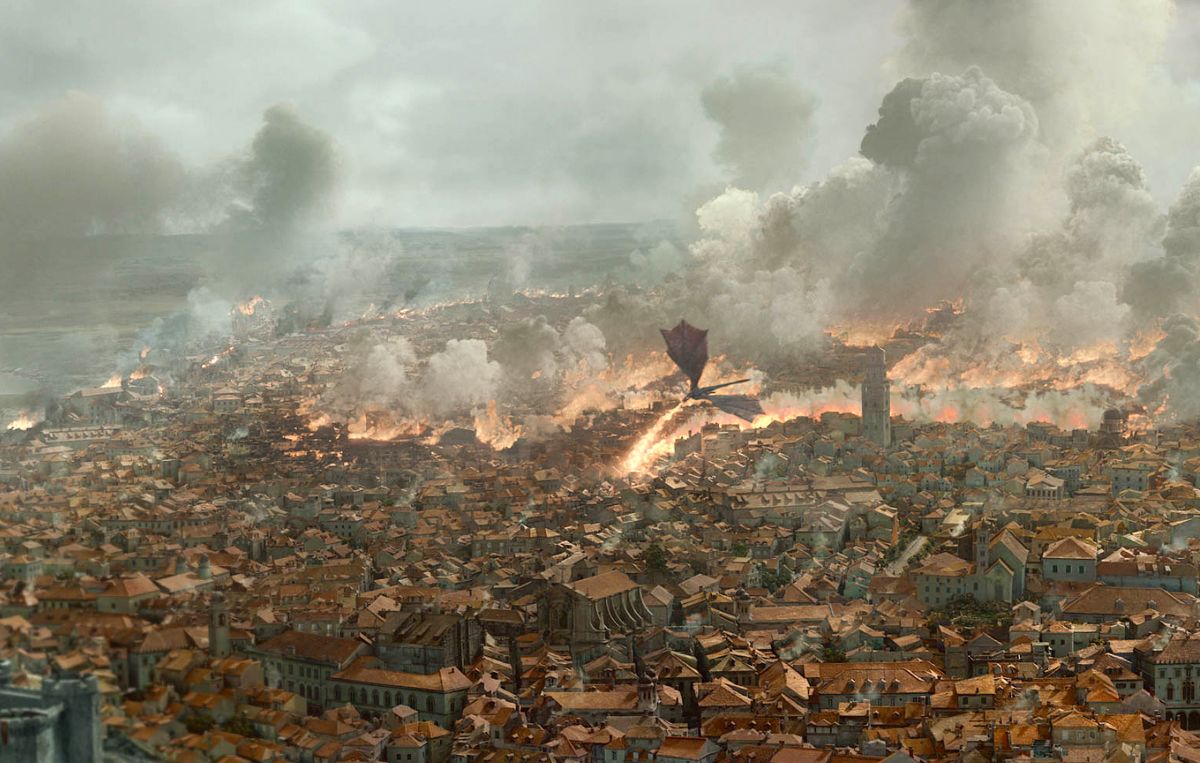 Daenerys’ army assembles outside of the city ready to take on the Lannister army and the Golden Company while she takes to the skies on Drogon. Unlike previous battles, Daenerys uses Drogon more strategically starting with taking out Euron’s fleet. The last time she saw the fleet it had the element of surprise and took down Rheagel. This time she uses the sun to make the dragon harder to see and is able to easily take down the fleet. She then blows open the front gate of King’s Landing taking out the Golden Company in the process.

Jon and those on the ground are easily able to route the remaining defenders while Daenerys reigns destruction from above. Eventually, the Lannister soldiers see how futile their defense of the city is and drop their swords while the bells ring indicating a surrender. During the destruction, Cersei is watching from the Red Keep and realizes she has finally lost. But things are not as simple as a surrender would imply…Daenerys is out for blood and fully becomes the “Mad Queen” many have feared.

Something snaps within her and even though the bells are ringing and the soldiers dropping her weapons, she is not done. She takes off with Drogon and continues to burn the city frying both soldiers and citizens alike. It may be one of the worst atrocities (at least in terms of scale) we have seen on the show. She doesn’t seem to care who she kills and just wants the city and the Red Keep to burn.

We get to see the destruction through the eyes of Arya who had gone with the Hound to exact revenge on Cersei and the Mountain, respectively. In one of the best scenes of the episode, the Hound convinces Arya to turn away from her quest of revenge and save herself. She actually listens to him and flees the Red Keep just to be caught in the destruction caused by Daenerys. The directing, cinematography, and music is perfect during these scenes as she runs through the city doing what she can to help. We see the helplessness of the common people and just how much Daenerys has descended into madness. She even sets off the stores of Wildfire her father, the Mad King, had distributed throughout the city fulfilling his final wishes of destroying King’s Landing.

The men on the ground are not immune to what Daenerys is doing either. Grey Worm, still grieving over Missandei, throws his spear at the unarmed Lannister army causing pandemonium in the streets. Jon initially freezes not believing what he is seeing and trying to avoid fighting. He has to eventually but stays very defensive only engaging when someone attacks him. He tries to stop some of the men from acting like animals but cannot until later in the fight when he finally convinces them to retreat.

I felt bad for Jon during this part of the episode since he is clearly at a loss for what to do and seems just overwhelmed. He shares a look with Grey Worm who clearly thinks Jon is a traitor and I expect that to come to the forefront during the series finale next week. 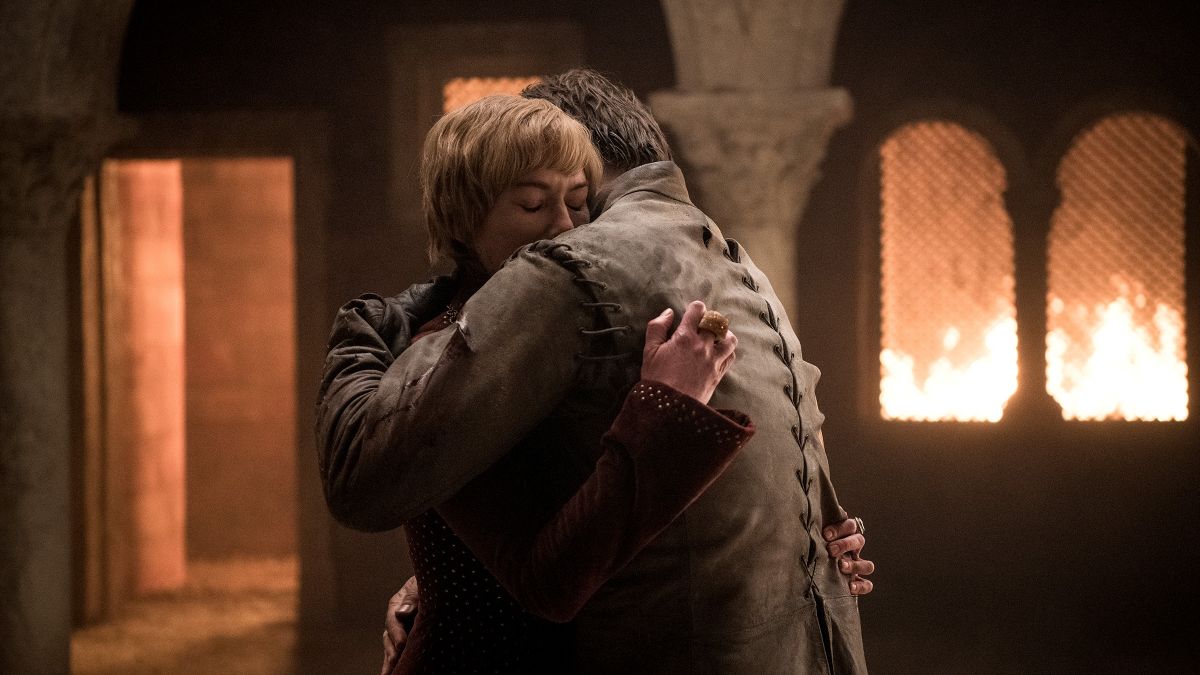 As I mentioned earlier, Arya and the Hound get into the Red Keep and are looking for revenge. While the Hound convinces Arya to give up on her quest, he continues on knowing full well he will die during the battle. He eventually finds Cersei, Qyburn, the Mountain, and the rest of Queen’s Guard. He dispatches of the guard quickly and is ready to face his brother. Qyburn tries to stop the battle from happening, but the Mountain does what he does best and throws Qyburn to the ground smashing his skull. It is a fitting end to one of the more unique characters in the show. With Qyburn dispatched, the “Cleganebowl” commences. The two brothers fight a brutal battle with the Hound getting in some good hits, but being unable to kill the undead Mountain. TIn another fitting ending, the Hound forces both of them to fall off the Red Keep into the dragon fire. The Hound become one of my favorite characters and I am glad we got to see him face his brother in epic fashion.

After Qyburn is killed, Cersei slinks away from the fighting brothers and finds Jamie waiting for her. Jamie is in bad shape after a fight with Euron he has while trying to get into the Red Keep. Jamie is able to kill Euron but sustains what look to be life-threatening wounds. He is propelled by his desire to find and rescue Cersei which shows how much he really does love her. The two head down to the bowls of the castle to get to the boat that is waiting for the two of them. The only problem is that the exit has caved in and they become trapped. The embrace each other one last time as the castle collapses around them killing them.

Jamie and Cersei have one of the more complex relationships on the show with Jamie wavering throughout the course of the series. Several times he seems like he has broken Cersei’s spell on him only to come back to her in the end. This may rub a lot of people the wrong way as they want Jamie to have a grand redemption arc for his story but I think this is more real than that. Not everyone is able to redeem themselves and as he said in the previous episode, he is not a good person. Cersei is the only woman he has truly loved and he died with her.

This episode did a lot to clear out some of the characters we have followed for a long time. We lost Varys, Qyburn, the Hound, the Mountain, Euron, Jamie, and Cersei. I don’t think we have seen the death of this many characters in one episode during the entire run of the show. Those who are left must now pick up the pieces. The big question heading into the series finale is “who will sit on the Iron Throne”?

The answer to that is complex and assumes that there will still be an Iron Throne to sit on. Jon’s reaction to what Daenerys did will be the key to the finale. Will he still follow her? Or will he (or Arya) be forced to kill her? How will the North react to hearing the news? Will Davos and Tyrion help Jon who must seem like a much better fit for the throne?

Personally, I think either Jon or Arya will end up killing Daenerys and abolishing the idea of the Seven Kingdoms. There are enough rulers spread throughout Westeros to create smaller kingdoms and go back to the time before the Targareyns came from Valyria. Sansa will rule the North, Yara will take the Iron Isles. There was mention of a new prince in Dorne, Bronn has been promised High Garden, and Sam may be in line for a portion of Westeros. I could easily see the ending of the series be the breaking down of the kingdom with everyone starting fresh.