The eighth and final season of HBO’s Game of Thrones premieres in April so I thought this would be the perfect time to rewatch the series. I will be writing about each season as I finish watching them with what is going on and some tidbits on what I noticed this time around. Warning: There will be spoilers for all seasons of Game of Thrones and these articles assume knowledge of future events.

Many of the characters are now starting to move towards their end games. We are well past the half-way point in the series and heading towards final resolutions.

The Story in Westeros 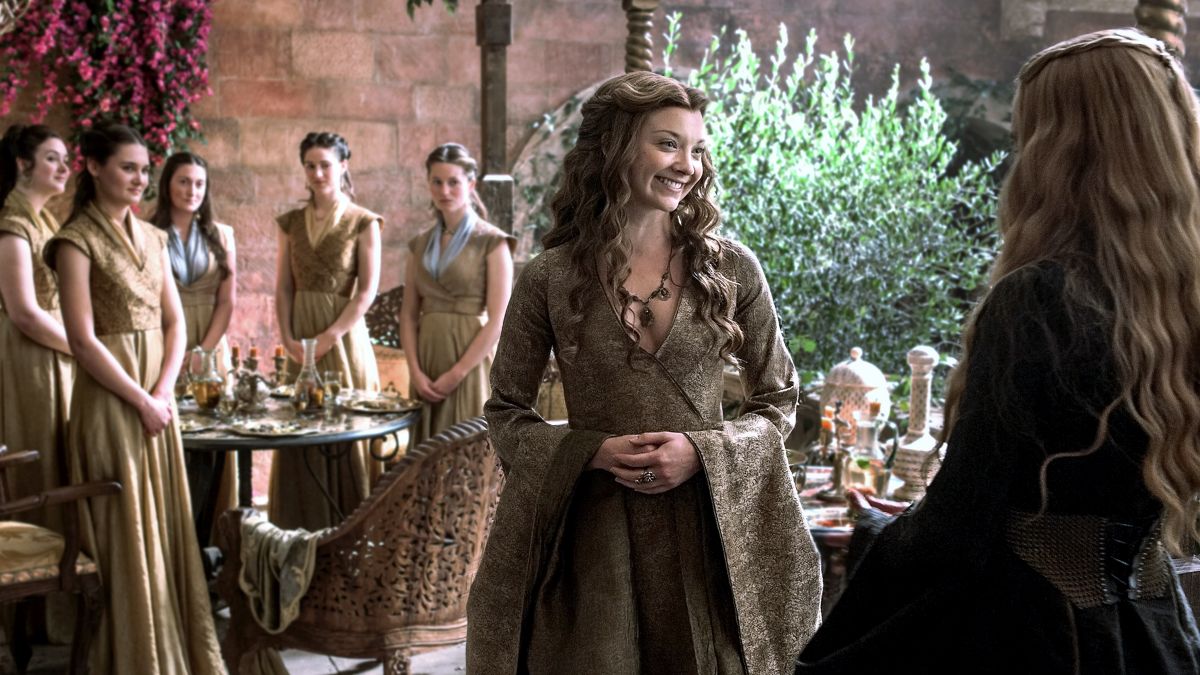 After the death of Tywin, there is a bit of a power vacuum in King’s Landing and Cersei is worried about the Tyrell’s. So she makes her next move and arms a branch of the Faith who are lead by the so-called ‘High Sparrow’. Her goal is to bring down the Tyrell’s by having Loras arrested for his affair with Renley Baratheon. This leads to a trial and ultimately Queen Margaery being arrested as well. The High Sparrow is deeply devout and claims he does everything in the name of the Seven but he seems to enjoy the power.

Olenna Tyrell does not take kindly to the imprisonment of her niece and nephew and works with Little Finger to have Cersei imprisoned for her affair with her cousin Lancel. This is a call back to the early seasons when we see Tyrion use this affair to spy on Cersei. Olenna’s claims are bolstered by Lancel himself who has joined the sparrow’s after his fall from grace. The charges culminate in Cersei performing a walk of shame where she walks through the city naked to atone for her sins. At the end of the season, both of the Tyrell’s are still imprisoned while Cersei walks free.

Jamie and Bronn head to Dorne to rescue Marcella Baratheon who was sent there back in Season 2. This is by far the weakest story in Game of Thrones so far and the less said about it the better. Jamie and Bronn do “rescue” Marcella, but she dies on the way back to King’s Landing. The family of Prince Oberyn conspired to kill her, which will be somewhat important in later seasons. 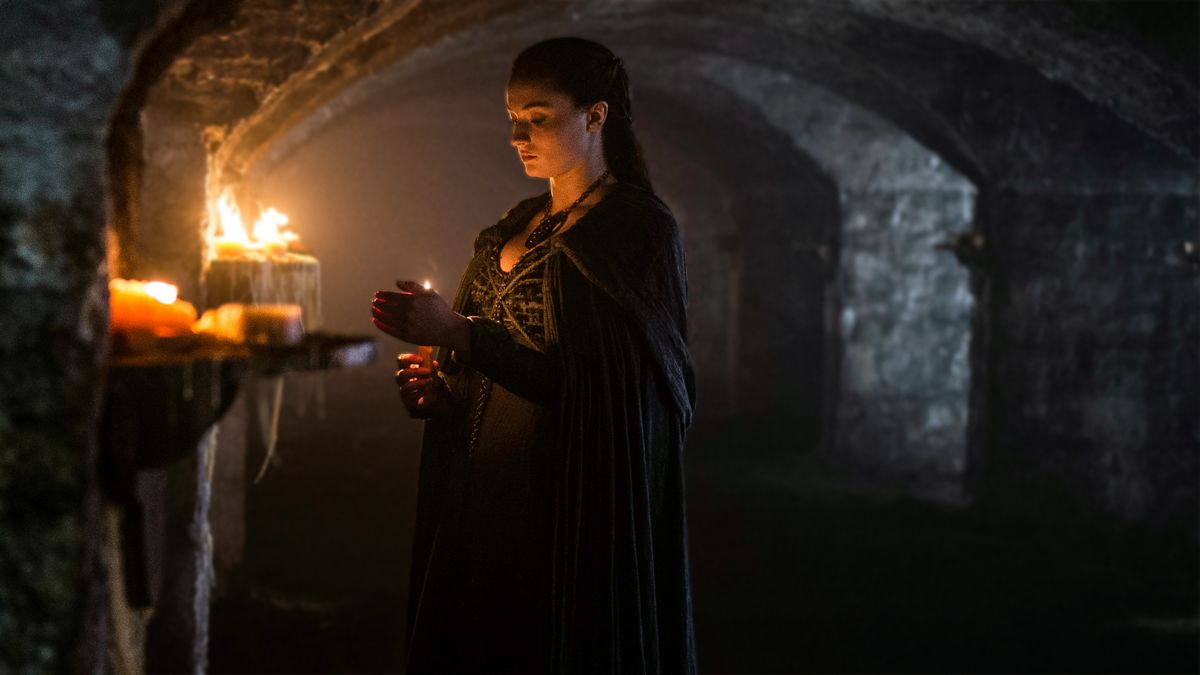 The Bolton’s still control the North and are settling into Winterfell to start the season. Roose made a deal with Little Finger to marry his son Ramsay to Sansa to solidify the Bolton hold in the North. Based on what we saw in Seasons 3 and 4 we know that this will not go well for Sansa. Ramsay acts exactly as expected and is made even worse since Theon, who has known Sansa since they were both little, has to help Ramsay terrorize Sansa. Luckily, Theon breaks out of Ramsay’s hold and helps Sansa escape from Winterfell at the end of the season. We only see them jump from the Winterfell walls, but we know that they survive in the next season.

Brienne and Podrick are heading North and encounter Sansa and Little Finger on the way and while she rebuffs Brienne’s offer for help they head to Winterfell anyway. Brienne hopes to still help Sansa and wants to stay close. She will not do much this season, but she will play a bigger role in the next season. She will also have a part to play in Stannis’ storyline this season.

The Story at the Wall 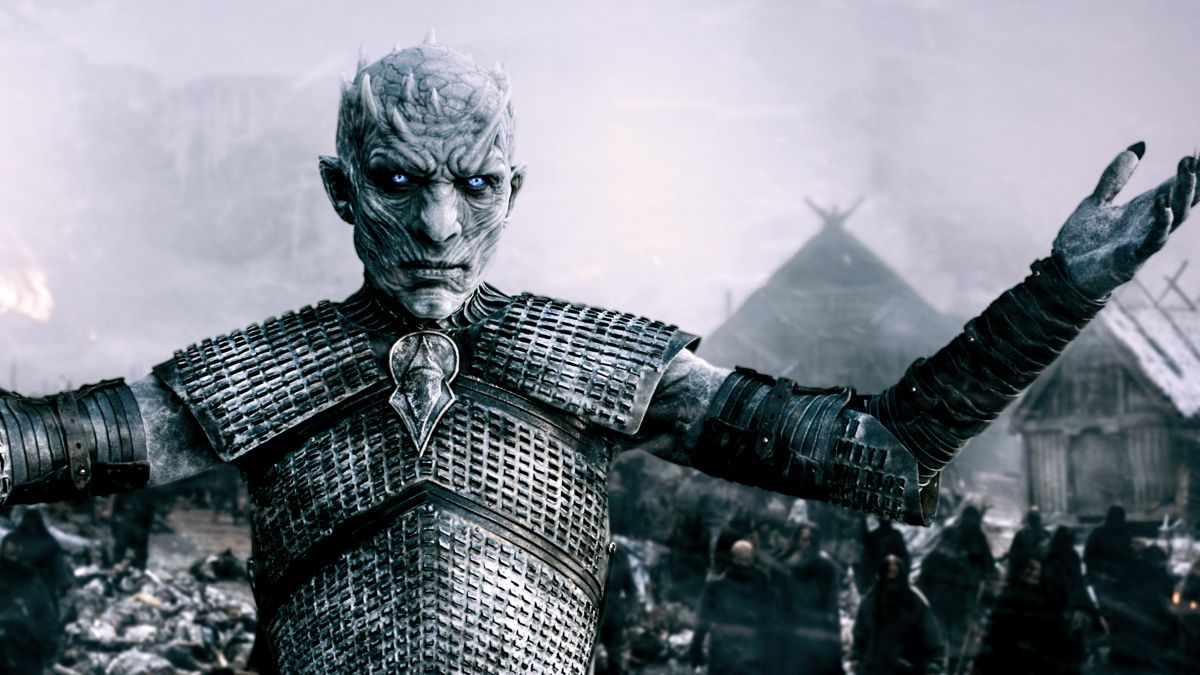 After helping Jon defeat the Wildlings at the Wall, Stannis tries to convince Jon to join him in exchange for making him the Warden in the North. Jon is intrigued by this but ultimately keeps his vow to the Night’s Watch and stays with them. Jon also becomes the next Lord Commander after Sam makes a persuasive argument in his favor. A lot of the season is focused on what Stannis will do and how Jon leads the Night’s Watch.

One of Jon’s main concerns is defending against the White Walker attack that he knows is coming. To do this he wants to allow the Wildlings to pass through the wall and settle in the area just to the south known as The Gift. This causes a large division within the Night’s Watch that culminates in some of them betraying Jon and stabbing him to death. Prior to his death, Jon does succeed in bringing many of the Wildlings south in a huge battle at Hardhome. This battle is one of the more epic battles of the series and has Jon faceoff with some White Walkers directly. We also find out that Valyrian Steel will kill White Walkers in addition to Dragon Glass. 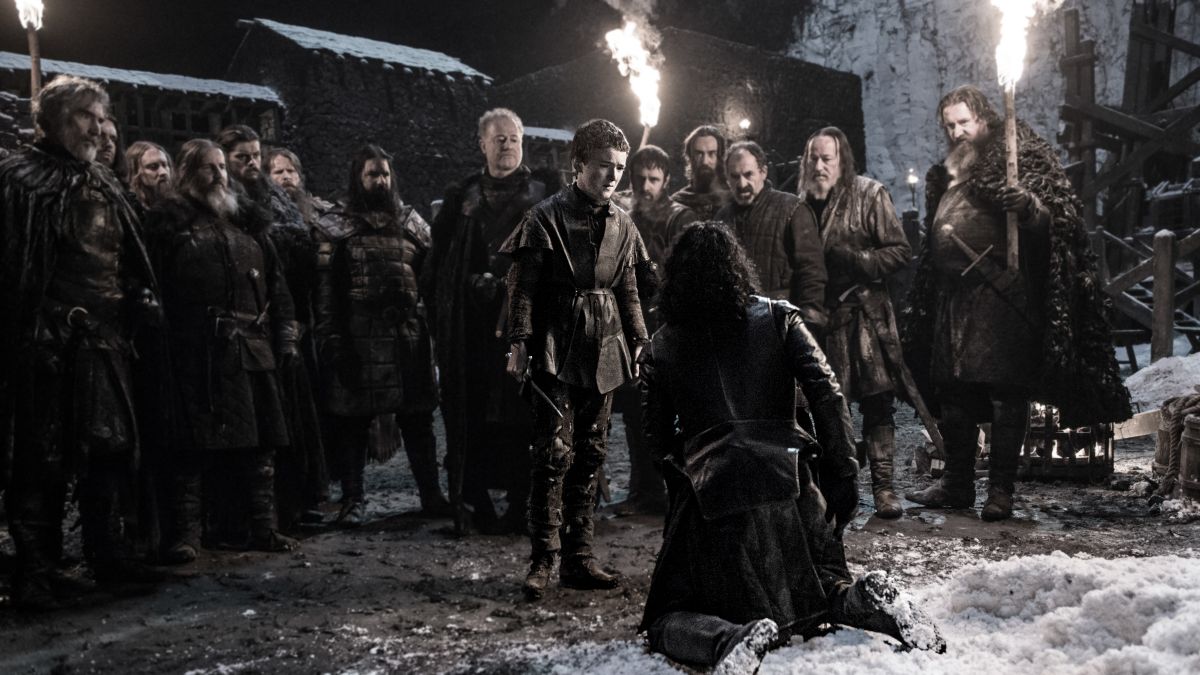 While Jon heads north to help the Wildlings, Stannis heads south to Winterfell. With winter beginning, he has a tough road and struggles to get to Winterfell. With his army at death’s door, Melisandre convinces Stannis that he needs to make a sacrifice using King’s Blood. The only person who he can sacrifice is his daughter, Shireen. This causes his wife to hang herself and brings down the morale of the army. This will also be a plot point in the next season when Davos finds out what happened and blames Melisandre.

We never get to see Stannis face off directly with the Boltons, but we do see the aftermath. Ramsay takes “20 good men” to attack Stannis and using guerilla tactics, Ramsay prevails. Stannis’ army is defeated and Stannis dies in the fight though not to Ramsay. Brienne is still in the area after the fight and is finally able to avenge Renley’s death from season 2.

The Story in Essos 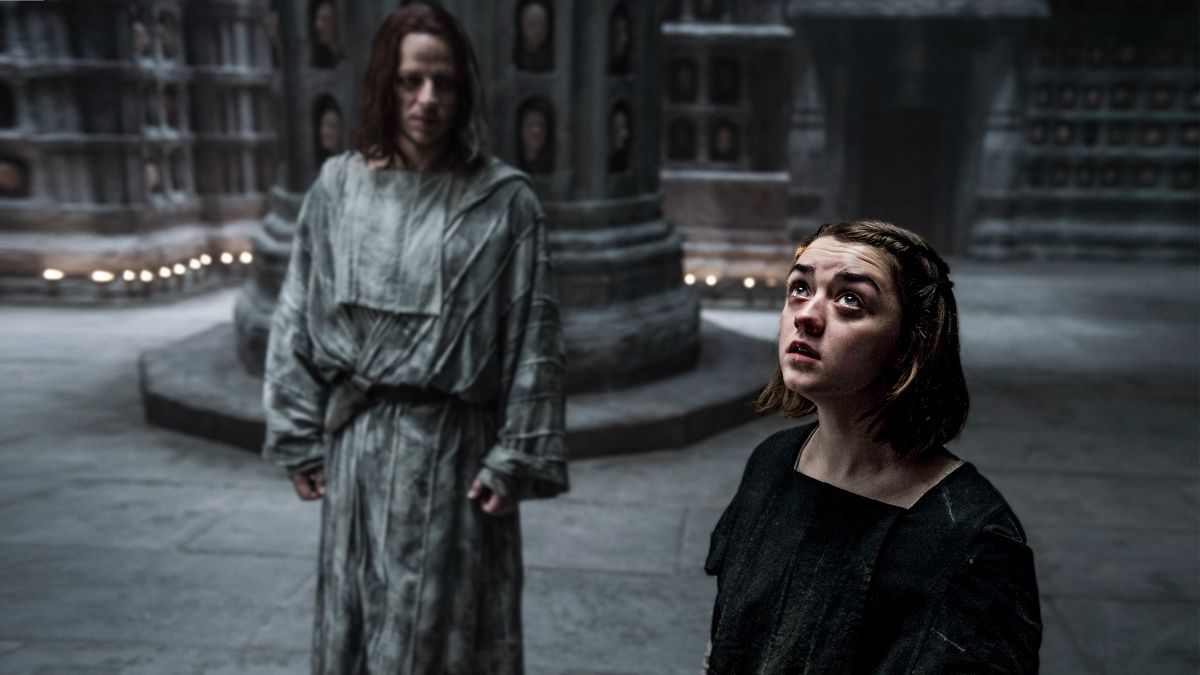 After leaving the Hound for dead at the end of Season 4, Arya makes her way to Braavos and to the House of Black and White. Here she starts her apprenticeship with the Faceless Men. The Faceless Men are a group of assassins who can “take the face” of others while also losing their own identities by becoming “no one”. Her primary teacher appears to be Jaqen H’ghar, but is a faceless man who is using that face to make her more comfortable. Arya has some trouble becoming no one and defies the order by killing one of the men on her list, Meryn Trant. For this, she is blinded and sent out into the street. 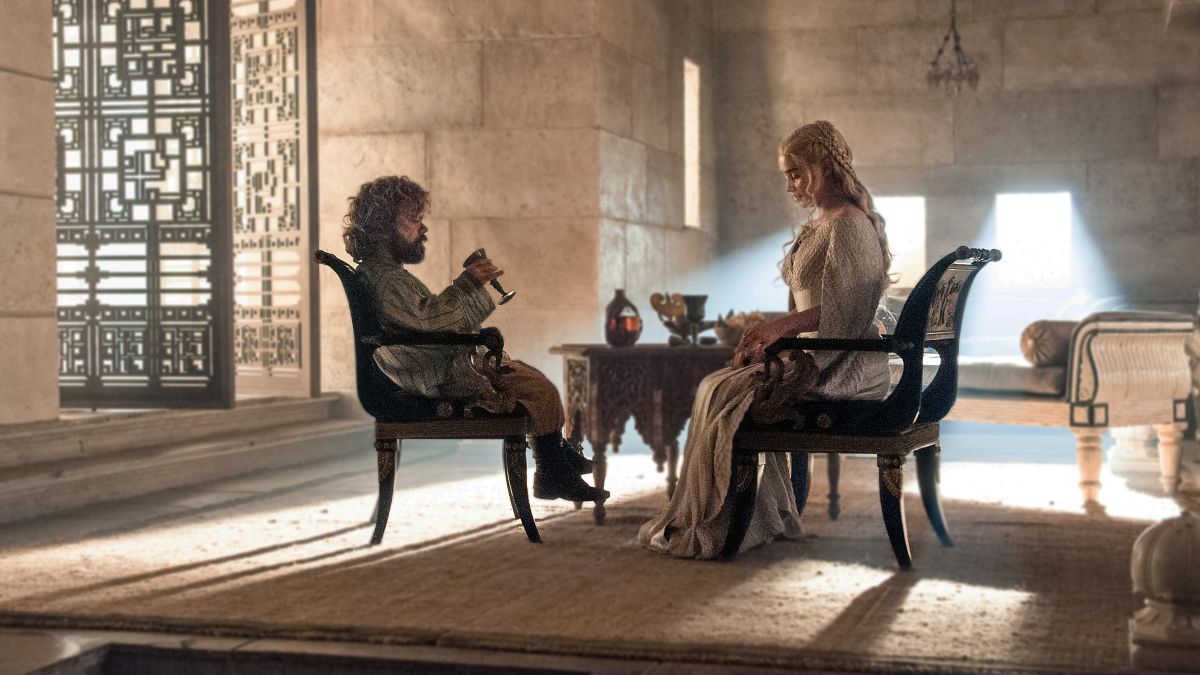 After killing his father at the end of Season 4, Varys helps Tyrion escape to Essos. Varys’ plan is to bring Tyrion to Daenerys so he can advise her as she moves to conquer Westeros. The plan does not go as planned and Jorrah captures Tyrion who plans to bring him to Daenerys as a gift. During their journey to Meereen, they sail near Old Valyria and are ambushed by the Stonemen. These “men” all have late-stage greyscale and are extremely contagious. Greyscale turns anyone who has its skin into stone and they slowly lose their mind. Anyone who comes into contact with it will contract it where the contact is made. During the struggle, Jorrah is touched by one and we see that the contracts the deadly disease. This will be important in later seasons though we have seen one person survive it; Stannis’ daughter Shireen.

After escaping the Stonemen, the pair is captured by a group of slavers who intend to take them to the fighting pits in Meereen… 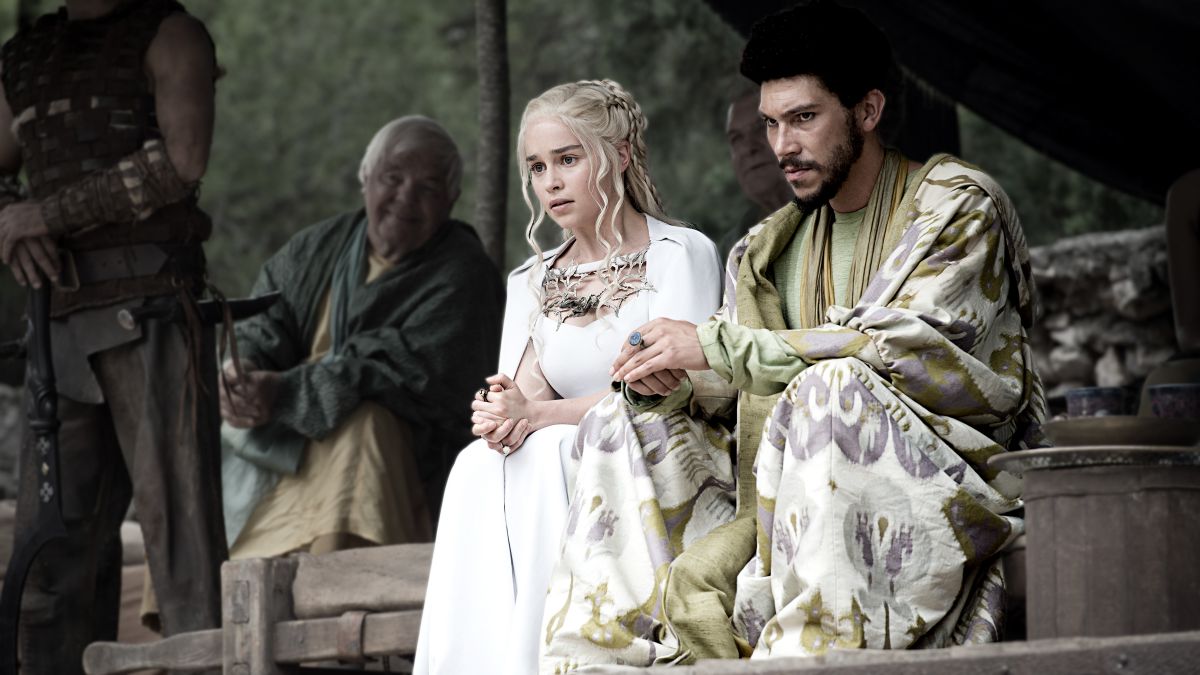 In Meereen, Daenerys is struggling to maintain her rule in the city. A group of insurgents, The Sons of the Harpy, is terrorizing the city and killing the Unsullied. This leads to the death of Barristan Selmy when he and Grey Worm are attacked. In order to try to keep the peace in Meereen, Daenerys agrees to marry Hizdahr zo Loraq, a member of the former ruling class, and to reopen the fighting pits.

During the re-opening of the pits, Jorrah fights to show Daenerys how much he cares. Tyrion also presents himself as a gift to help Daenerys take the Iron Throne. Soon after she meets Tyrion, the Sons of the Harpy attack and Daenerys is saved by Jorrah. Chaos ensues and Daenerys ends up in the pit. Drogon swoops out of nowhere to save her and she climbs on his back and flies away. Drogon gets hurt during his rescue of Meereen and flees the city to recover. While away from the city Daenerys is captured by a group of Dothraki and we will see where that leads in the next season.

Season 5 has a lot of great moments and the end of the season has some great episodes. The battle at Hardhome is fantastic and showcases the type of battle that makes the show shine. Seeing the Night King raise his hands to raise the dead at the end while staring at Jon is chilling. And even though everyone knew he would come back, seeing Jon get betrayed by the Night’s Watch is hard to watch. This season does have one of, if not the, worst plots in the show; Jamie and Bronn’s trip to Dorne. It is useless other than killing off Myrcella.

I am really looking forward to Season 6, which contains one of the best battles on television. We also get to see the dragons really unleash their fury and Daenerys start her trek back to Westeros.