The eighth and final season of HBO’s Game of Thrones premieres in April so I thought this would be the perfect time to rewatch the series. I will be writing about each season as I finish watching them with what is going on and some tidbits on what I noticed this time around. Warning: There will be spoilers for all seasons of Game of Thrones and these articles assume knowledge of future events.

The Story in Westeros 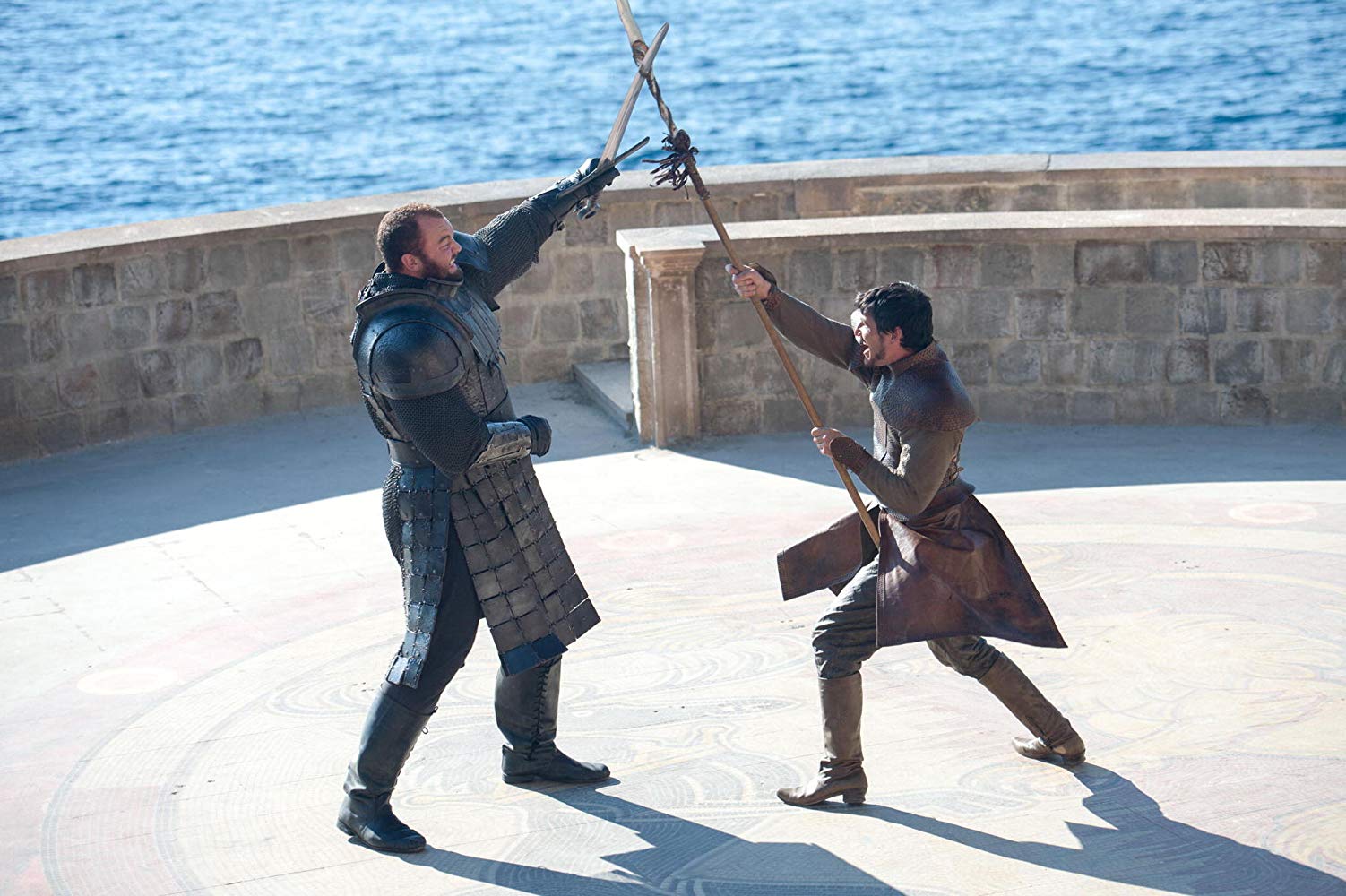 At the beginning of the season, the focus in King’s Landing is on Joffrey and Margaery’s wedding. Some of the most influential people in Westeros head to King’s Landing for the wedding, including Prince Oberyn of Dorne. The wedding is a grand spectacle, but the happiness is short-lived as Joffrey is poisoned during the feast. Cersei pins the murder on Tyrion, but we find out later it was committed by Little Finger and Margaery’s grandmother, Oleanna. Oleanna did not want her granddaughter married to a monster like Joffrey so took matters into her own hands.

After the murder, the focus of the season is the trial of Tyrion for the king’s murder. This produces some great conversations between Tyrion and a host of other characters. His conversations with Jamie and Oberyn particularly stand out. The death of Joffrey also causes Brienne to strike out with Podrick in search of the Stark girls.

During the Tyrion’s trial, Tywin and Cersei bring in witness after witness who can pin the murder on Tyrion. He weathers all of these until the end when Shea testifies. This breaks him and he demands a trial by combat to prove his innocence. The scene at the end of his trial is one of my favorite scenes in the series and I am still disappointed that Peter Dinklage did not win an Emmy for the performance.

Tyrion tries to get Bronn to be his champion, but this is one battle too many from Bronn. Instead, Oberyn offers to be Tyrion’s champion so he can exact revenge on the Mountain (Cersei’s champion) for killing his sister during Robert’s Rebellion. Oberyn seemingly defeats the Mountain but lets his thirst for revenge overcome him and the Mountain crushes his head in one of the more graphic scenes of the season.

After the trial by combat, Varys and Jamie help Tyrion to escape King’s Landing to head to Essos. Tryion takes a detour during the escape and finds Shea in his father’s bed. Her testimony at the trial was heartbreaking enough, but this was one step too far. He kills her with his own hands then takes a crossbow and kills his father. From there he escapes on a ship with Varys to Essos where he will spend the next couple of seasons. 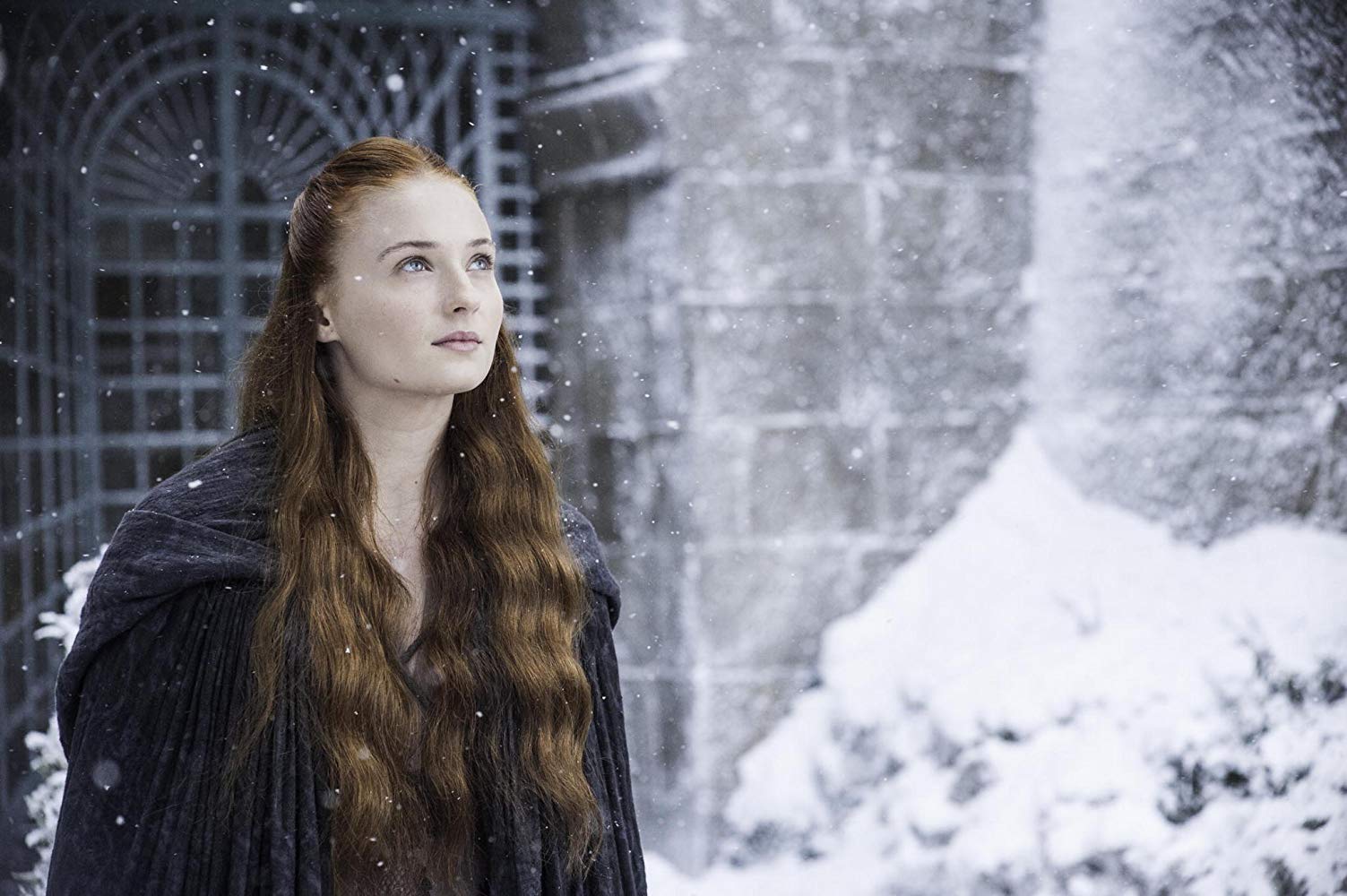 For a short time, Sansa seems happy in the Vale. She is able to relax a little but that changes Lysa catches Little Finger kissing her in a courtyard and comes close to killing her for it. Little Finger intervenes and ends up killing Lysa with only Sansa as a witness. The Lords of the Vale question him after her death, but Sansa shows that she knows how to play the game and keeps Little Finger from being executed.

Arya and the Hound 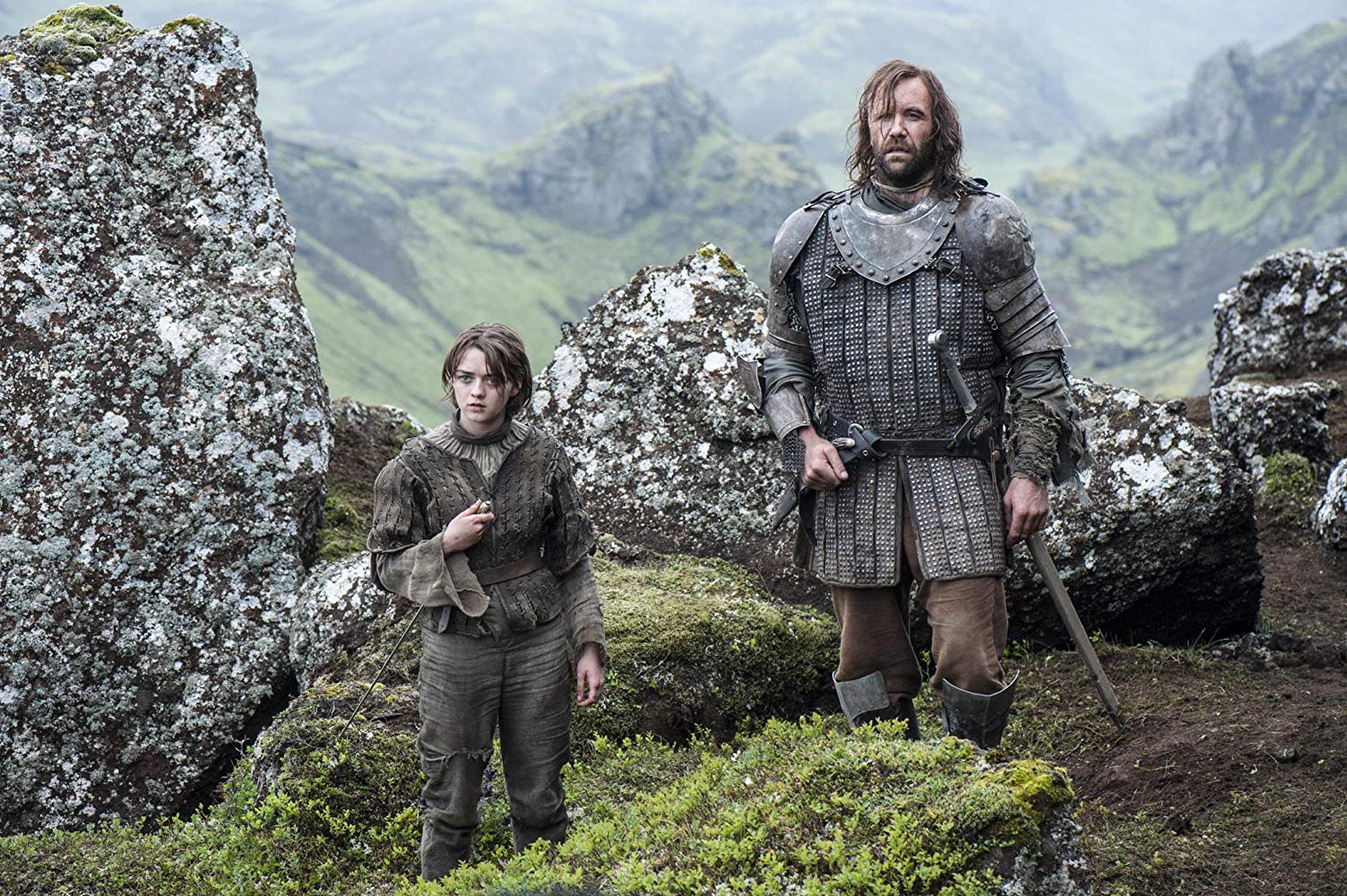 At the end of Season 3, Arya and the Hound are still traveling together after events of the Red Wedding. The two make a great pair and ride through the Riverlands towards the Vale and the protection of Lysa. When they finally arrive at the Vale, they find out that Lysa is dead but do not know that Sansa is there. It’s a small scene, but a great one none-the-less. The guards tell the pair about Lysa and Arya just bursts out laughing. She has gone through so much since leaving King’s Landing at the end of Season 1 that this is just icing on the cake. She just breaks, and it is perfect.

After leaving the Vale, the pair heads north and runs into Brienne and Pod. By this time, The Hound has taken to teaching Arya what he knows and they have formed a good partnership. Arya trusts the Hound so much that she refuses to go with Brienne. Brienne feels that she needs to rescue Arya from the Hound and they fight. This is a brutal, epic fight and as with most fights on Game of Thrones, done so well. Brienne is victorious, but Arya still won’t join her and Podrick so they leave her behind.

After the fight, Arya has a final scene with the Hound where she leaves him to die even though he begs her to kill him. It is one more step for Arya towards what she will become in the next few seasons. At the end of the finale, we see Arya on a boat to Bravos to train with the Faceless men.

After his season of torture, Theon is Ramsay’s pet, Reek. Theon has been completely broken by Ramsay and it is amazing to see his transformation from Season 2. There is even a point where Theon’s sister comes to rescue him from Ramsay and he refuses to go. He has been broken down so far he doesn’t really know who he is anymore. This is the lowest point for him in the series and his redemption over the next few seasons is interesting to watch.

Speaking of the Ramsay, his father, Roose, has been made Warden of the North by the Lannisters in place of the Starks. His betrayal of the Starks in the Red Wedding has paid off for him in the short term but has also riled up the North. We will see the ramifications of this in future seasons, but for now, the Boltons are the rulers of the North. 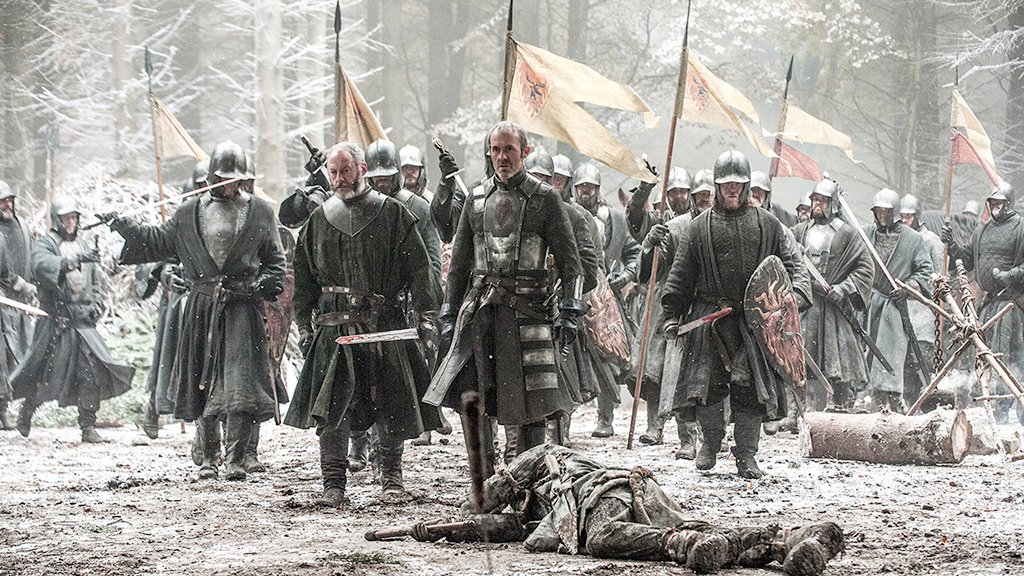 Stannis is still on Dragonstone for most of the season planning his next move. At the end of Season 3, Davos let Gendry, Robert’s bastard son, escape Dragonstone which angered Stannis landing Davos in prison. During his time in prison, Davos learns to read from Stannis’ daughter, Shireen. The scenes between the two are always great and show why Davos is one of my favorite characters. He may not be the smartest, but he works hard and has a good head on his shoulders. By the end of the season, Melisandre urges Stannis to help the Night’s Watch defend the realm against the White Walkers so he heads north to help at the Wall.

The Story at the Wall and Beyond 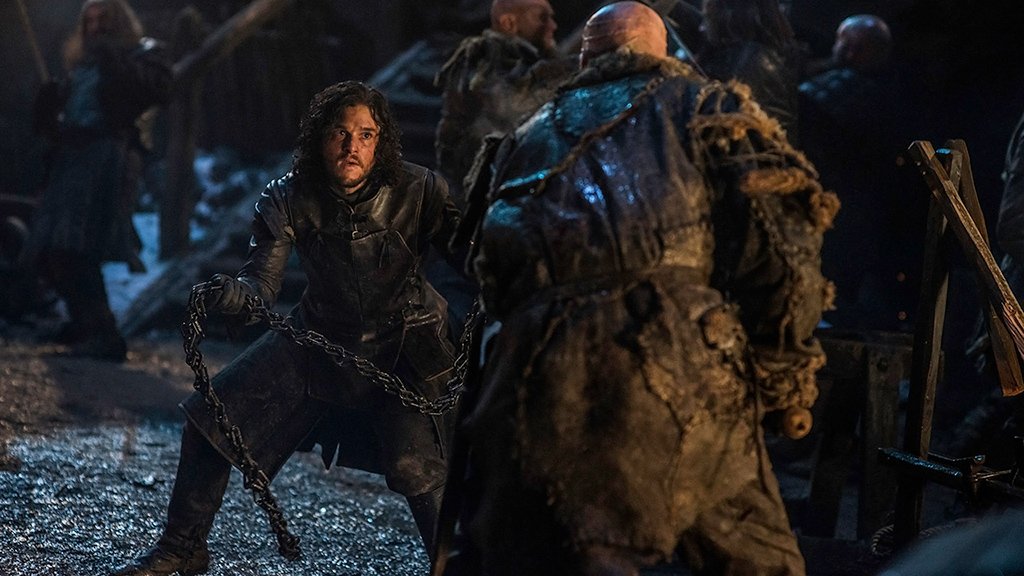 After his sojourn north of the Wall in Season 3, Jon is back with the brothers of the Night’s Watch. He is seen by some (Alliser Thorne and Janos Slynt) as a traitor and wildling lover. They no longer trust him after the events of Season 3, but he still goes about his duties and tries to prepare the men for the impending attack. Most of the early season is spent in preparation but it pays off splendidly in the ninth episode of the season.

As with the Battle of Blackwater in Season 2, the ninth episode in this season takes place in one location, the Wall. We see the Wildling attack that has been building since Season 3 and it is fantastic. Seeing Jon go toe-to-toe with Styr, the leader of the Thens. Both sides have losses as the Wildlings lose Ygritte (which deeply affects Jon) and the Night’s Watch loses Pyp and Grenn. Grenn has one of the more heroic deaths on the show as he holds the tunnel leading north as a giant attacks.

The battle is brutal and the Night’s Watch barely holds off the Wildings when day breaks. Jon decides to play the hero and try to negotiate with Mance Rayder. During the meeting between the two Stannis shows up to route the Wildlings with his cavalry and save the Night’s Watch. Stannis’ presence at Castle Black will cause some issues in Season 5, but for now, he is seen as a hero for saving the Watch. 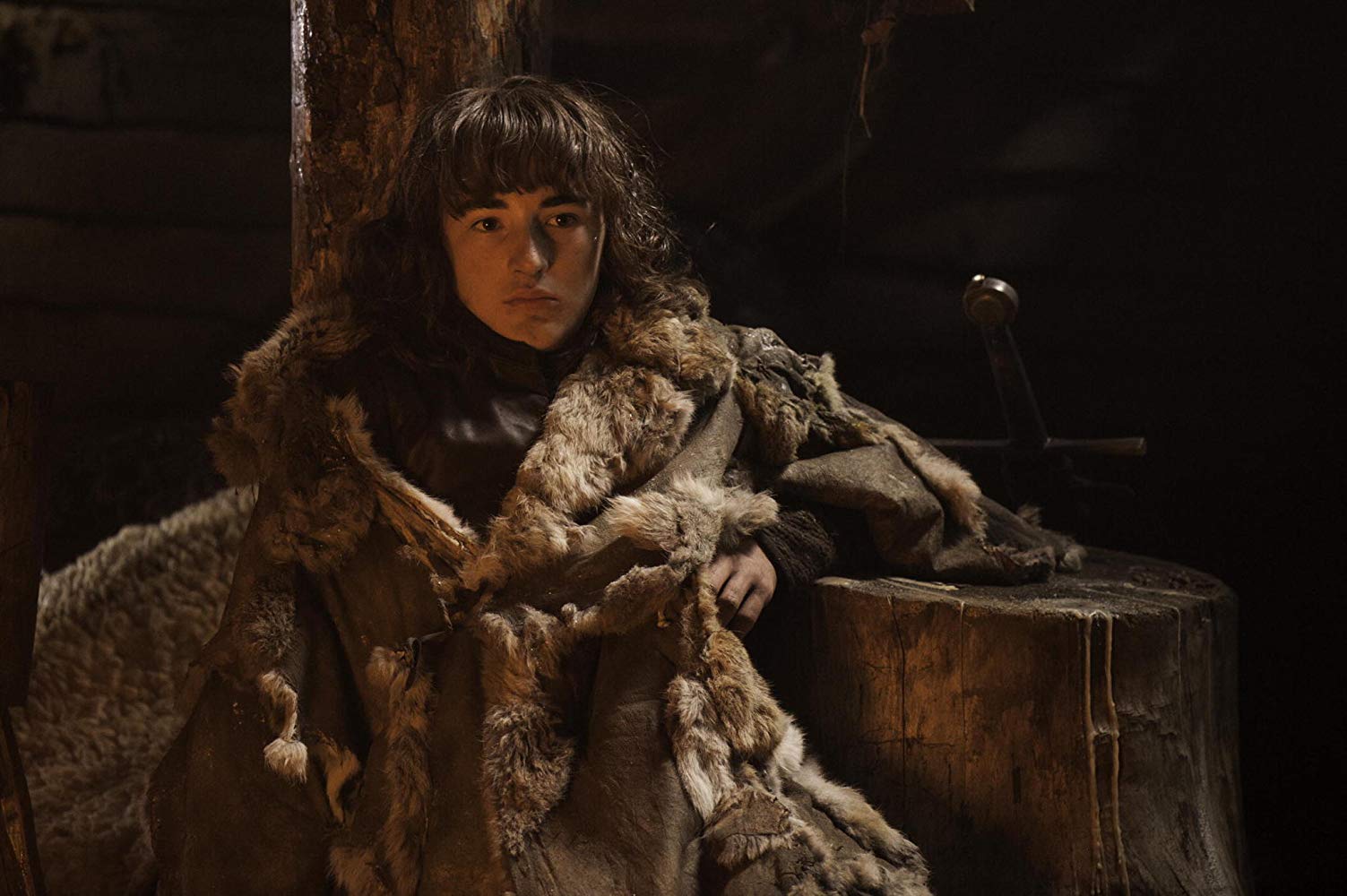 This season Bran, Hodor, Meera, and Jojen make their way north of the Wall to find the Three-eyed Raven. Most of the season is them trying to get to where the Three-eyed Raven is but they do encounter some trouble along the way. The group gets captured by the band of Night’s Watchmen who killed Commander Mormont and nearly encounter Jon when he goes to save the captives. Bran has to choose between alerting Jon to his presence and escaping to find the Raven. He chooses to keep moving and the group eventually makes it to their destination.

When they get to the cave where the Three-eyed Raven is located, the meet one of the fabled Children of the Forest, but also experience tragedy as Jojen is killed as they get to the safety of the cave. We leave Bran in the cave with the Three-eyed Raven and will not see him, Meera, or Hodor again until Season 6. Bran will have a large role to play as he will learn a lot about the history of Westeros and potentially how to stop the White Walkers.

The Story in Essos 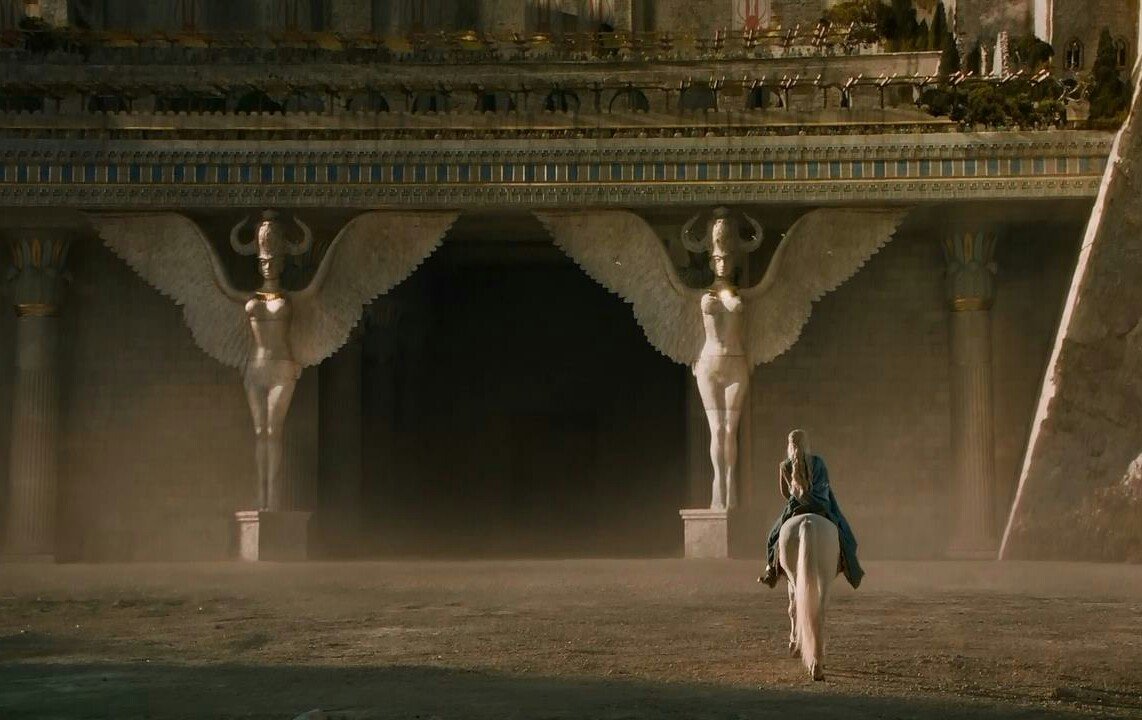 The story in Essos may be the weakest in Season 4. After liberating Meereen from the Masters early in the season, Daenerys stays to rule. This is sort of a  practice run for when she rules Westeros (she hopes) but doesn’t work well since she spends so much time in Meereen. This is the first of essentially three seasons of her rule of the city. Honestly, not a lot happens in Meereen this season, the notable exceptions are the chaining of two of the dragons and the banishment of Jorah Mormont. After Drogon burns the young daughter of a farmer, Daenerys realizes that she cannot let her dragons run free and chains two of them up in a pyramid. She also finds out that Jorah was spying on her in Season 1 and banishes him from her sight. We will see him again later next season.

Final Thoughts and Looking Ahead

There is a lot to like in Season 4. After the Red Wedding trims the cast a bit, the show can focus on the remaining cast better. The battle at Castle Black is fantastic and is even better than Season 2’s Battle of the Blackwater. With the end of Season 4, we have made it to the halfway point of the series. Most of the storylines are starting to ramp up and we are getting closer to the resolution. We are also getting closer to where the books end and everything is new material. The only weak part of the season for me is the plot in Meereen. This will continue to be a weak point over the next couple of seasons, but the rest is fantastic.