Microsoft Flight Simulator 2020 dropped on GamePass for Xbox users this past week. After being part of the closed Alpha for the PC release and having logged many many flight hours once Microsoft Flight Simulator 2020 was released on PC last fall, I was a little skeptical of a console port of such a technical masterpiece. Having now played it on Xbox I do still have some reservations, but is it simply because I’m an old-fashioned PC flight sim loyalist? You be the judge.

In the past, when you thought of consoles and games where you fly planes, you’d think of arcade-style flight action games like the After Burner or Ace Combat series. But not a serious flagship flight sim.

The visuals are beautiful while giving you the freedom to fly literally anywhere in a living world thanks to its integration with real-time data including weather, real-life flights, and satellite imagery provided by Bing. I would argue that the visuals you’re getting on your TV screen from your Xbox are equivalent to what you would expect from the PC version running with a good GPU.

When one thinks of flying a plane or playing a flight simulator, one tends to think of cockpits, joysticks, pedals, throttle quadrants, and more. Naturally, I was hesitant to try and fly an aircraft with an Xbox controller — even if it were one of the Elite models. But Microsoft has done a pretty reasonable job accommodating an Xbox controller as an input device.

When I play Microsoft Flight Simulator on my PC, I prefer to use primarily a stick, throttle, and mouse to navigate the cockpit to interact with the instruments and controls rather than using a keybind. The Xbox controller does a reasonable job replicating the mouse experience, allowing you to look and translate your position in the cockpit as needed.

When selecting a control, it will bring up a submenu to allow for precision control. For example, a common switch you’ll find in aircraft may have three positions: down, center, and up. When using the controller to move your cursor to the switch, you’ll receive a description and a prompt to press A to access the control. Once your control is selected, a submenu appears allowing you to move the switch to the desired position. 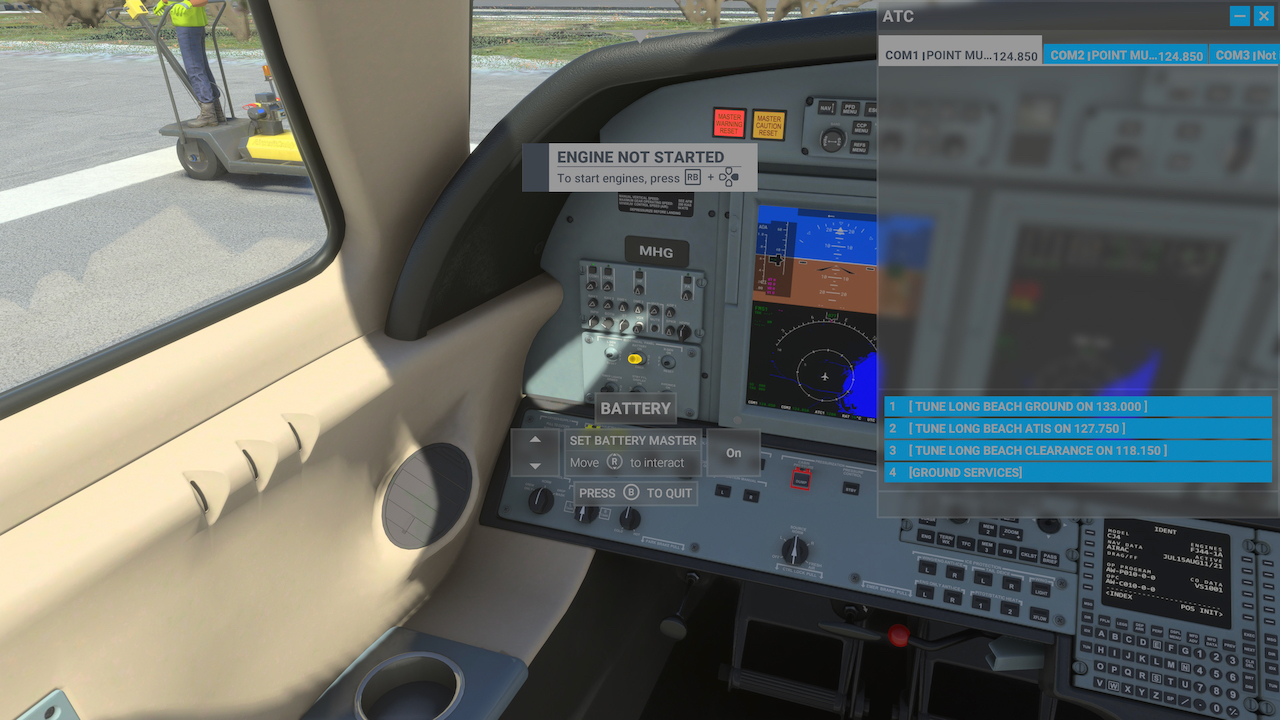 A similar menu is available for dials like those controlling your autopilot heading or altitude. Use the cursor on the controller to select the dial, turn the dial to the selected setting, and confirm. This is a great implementation that prevents stray button clicks and gives you an easier way to read your instruments and settings from the couch.

The Xbox implementation of the game also supports binding controls to a keyboard. I’ve been able to successfully use my Xbox chatpad to map controls. It’s much easier to have important systems like gear and flaps mapped to your keys during critical stages of flight like takeoff or landing.

Although I much prefer the proper joystick experience with flight sims, the Xbox controls do a decent job at controlling the plane. There are peripherals available to deliver a more authentic flight experience, but not many for Xbox. You’ll need to ensure that the flight stick is licensed for use with the Xbox, currently limiting you to Thrustmaster’s T.Flight Hotas One. There are other options in development like the Turtle Beach VelocityOne Flight or the Honeycomb Alpha Flight Control, but neither of these is available yet for purchase.

The Tale of Disk Space

Microsoft Flight Simulator 2020 is a great-looking game, and that comes at a cost of a lot of disk space. Currently, the game takes up over 102Gb of internal storage on my Xbox Series X. Once you’re in the game, there are additional updates, content packs, enhanced airport models, world data, and aircraft modules that you can download and install on your console. 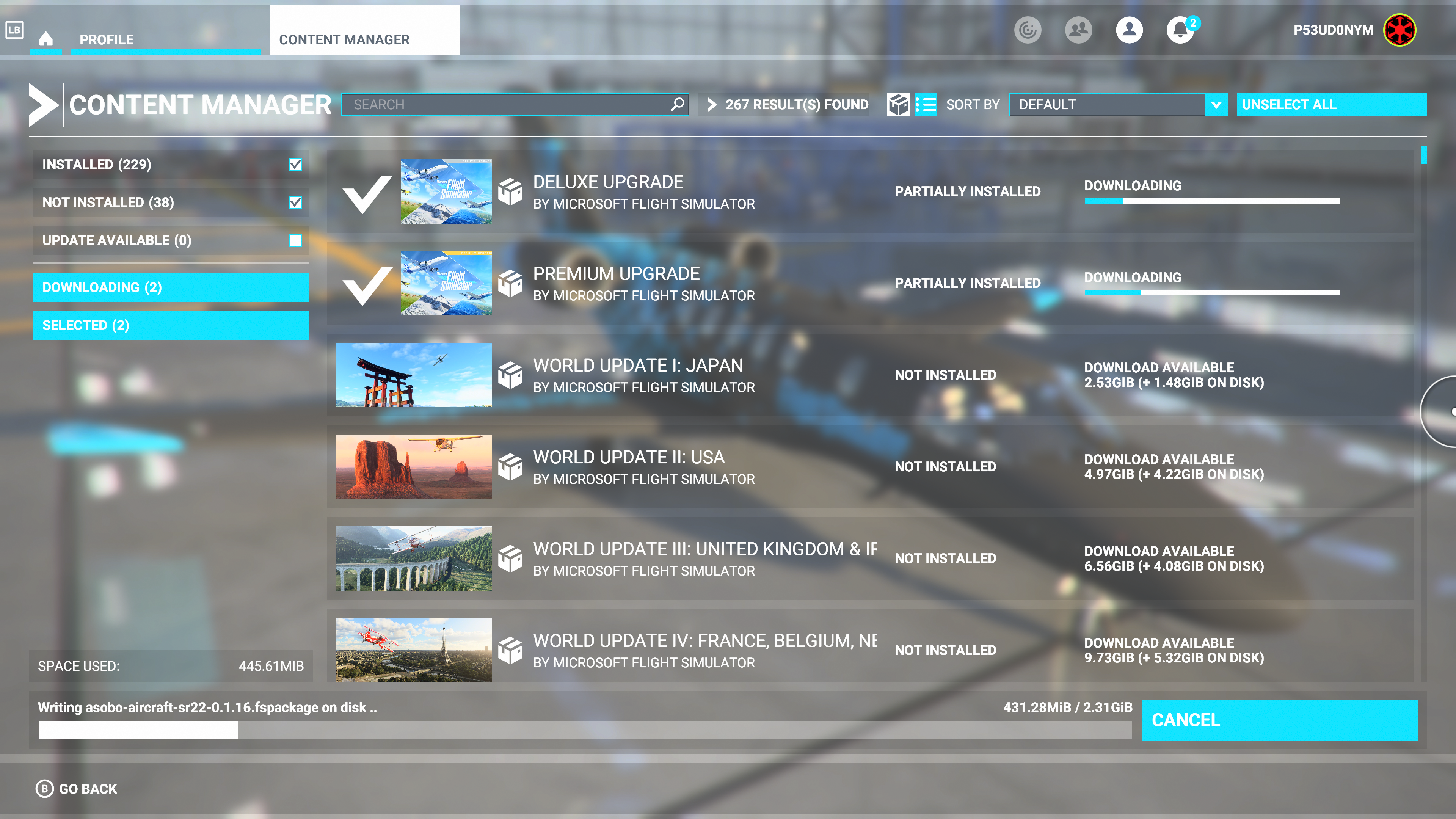 This of course is in addition to the live data consumed by the game to power the live world populated by Bing maps, weather, and air traffic. If you have a metered data connection, you might be in trouble. However, as in the PC version of the game, Microsoft Flight Simulator on Xbox allows you to place limits on the amount of data or bandwidth used by the game.

I’m pleased that the game syncs my purchases and pilot logbook between my account on the Xbox and on the PC. It’s still unclear if console players and PC players are able to fly together in the same instance, but I’m fairly certain they are. 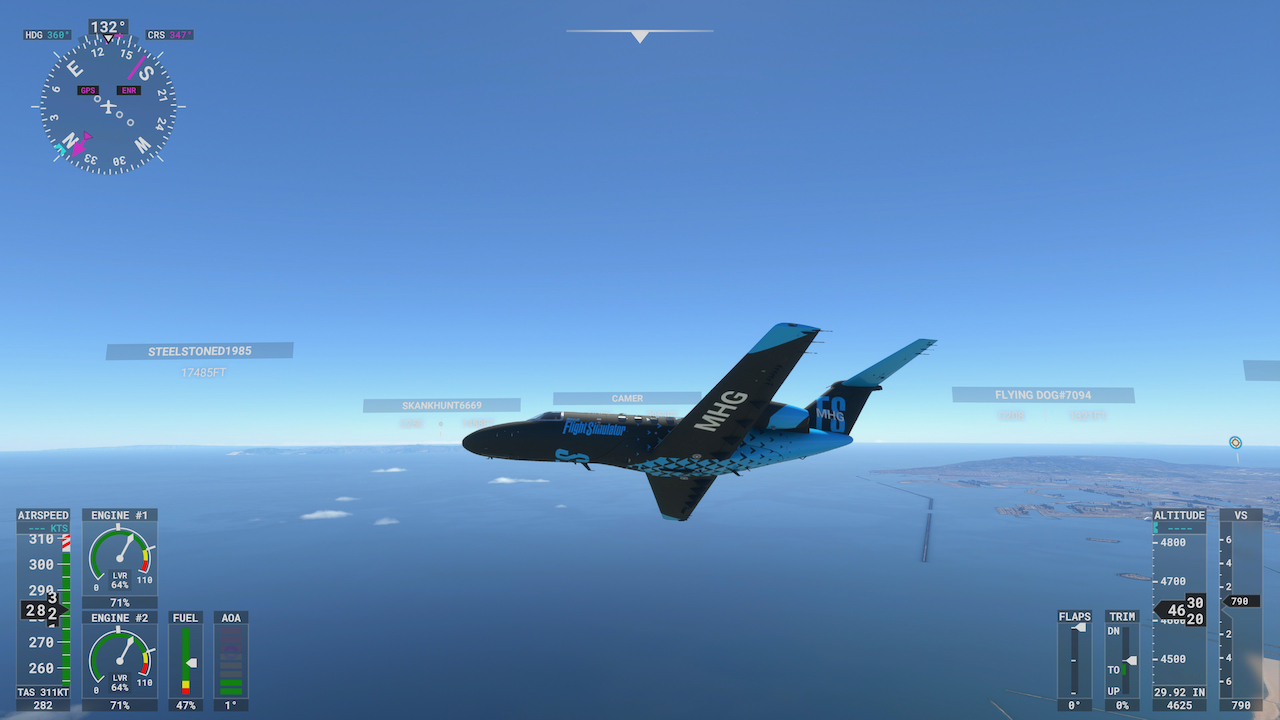 The game also seems to insert players from your friends list into the game as AI’s, similar to how ‘Drivatars’ work in Forza. What’s interesting, though, is that when I’ve spotted these friends in the world, they’re at major airports located near their real-world locations even though I’ve confirmed with them that they’ve never played the game. The privacy implications of this are interesting, if unclear. I’ve reached out to Microsoft to clarify this mechanic, but haven’t yet received a response.

The question I’ve asked myself over and over while flying on the Xbox is, “Who is this game for?” No serious flight simmer would play this on the Xbox given the lack of controls currently. But therein lies the answer. Microsoft Flight Simulator 2020 for Xbox is primarily targeted at players who may be interested in flight sims, but haven’t ever had the chance to play one. Now, with the game available on Game Pass for consoles, players can give it a go so long as they have the storage space.

Once players give it a chance, they may just hop over to PC (where their profiles will seamlessly transfer with them) for a better experience, or just wait until the world of flight peripherals for Xbox really takes off to improve their experience.

Microsoft Flight Simulator 2020 for Xbox may seem like a novelty to the more experience flight simmers, but this game is what the community needs to become more accessible to a wider variety of gamers. It looks and runs very well on the Xbox Series X, but just needs the market of flight controller accessories to catch up to the software.