The upcoming PlayStation 4 exclusive game from Quantic Dream, Detroit: Become Human, releases at the end of this month. In anticipation of its release, let’s take a look at what the game is all about including some thoughts on the currently available demo.

Note: The videos below may contain adult content that some may find difficult to watch.

What is Detroit: Become Human?

Detroit: Become Human is the next game from the studio, Quantic Dream which is known for Heavy Rain and Beyond: Two Souls. It has been in development for some time and looks to be a very ambitious game about the near-future where androids are commonplace. According to Quantic Dream’s website, the game was created based on feedback from a tech demo they did about an android who could feel emotions and looked to be sentient. Fans were moved by the demo and wanted to know more about her character and what happened after she left the factory.

We imagined a world in a near future where androids like Kara would look, speak and move like real human beings. We wondered how we, humans, would react if we were confronted with a new form of intelligence, how androids conceived as machines would be perceived if they started to have emotions. We didn’t want to do another story on AI because there are already so many great ones, we wanted to talk about what it means to be human and what it would be like to be in the shoes of an android discovering our world and their own emotions…

Between this description and the trailers I have seen, I am really excited for where this game could go. The game will follow the stories of three androids in varying circumstances as they try to “become human.” This game is coming at an interesting time as I think the story could be relevant to fans of HBO’s Westworld. There appear to be a lot of the same themes and I am interested in seeing how both of these play out.

There are three main characters (all androids) in Detroit: Become Human: Connor, Marcus, and Kara. All three have different purposes and motivations.

Connor is a special investigator with the Detroit Police Department who specializes in tracking down and neutralizing androids who have broken their program, known as deviants. As Connor, you will get to determine how he interacts with these deviants and decide how much empathy he feels for them.

The next android you will play is Markus, who seems to be one of the leaders of the android resistance. He has escaped his master and is working with other deviants to help liberate androids.

The final android you will play as is Kara, who is on the run and protecting a little girl. She will need to navigate a harsh world in order to survive. I think she may end up having the most interesting story as well as the most controversial. 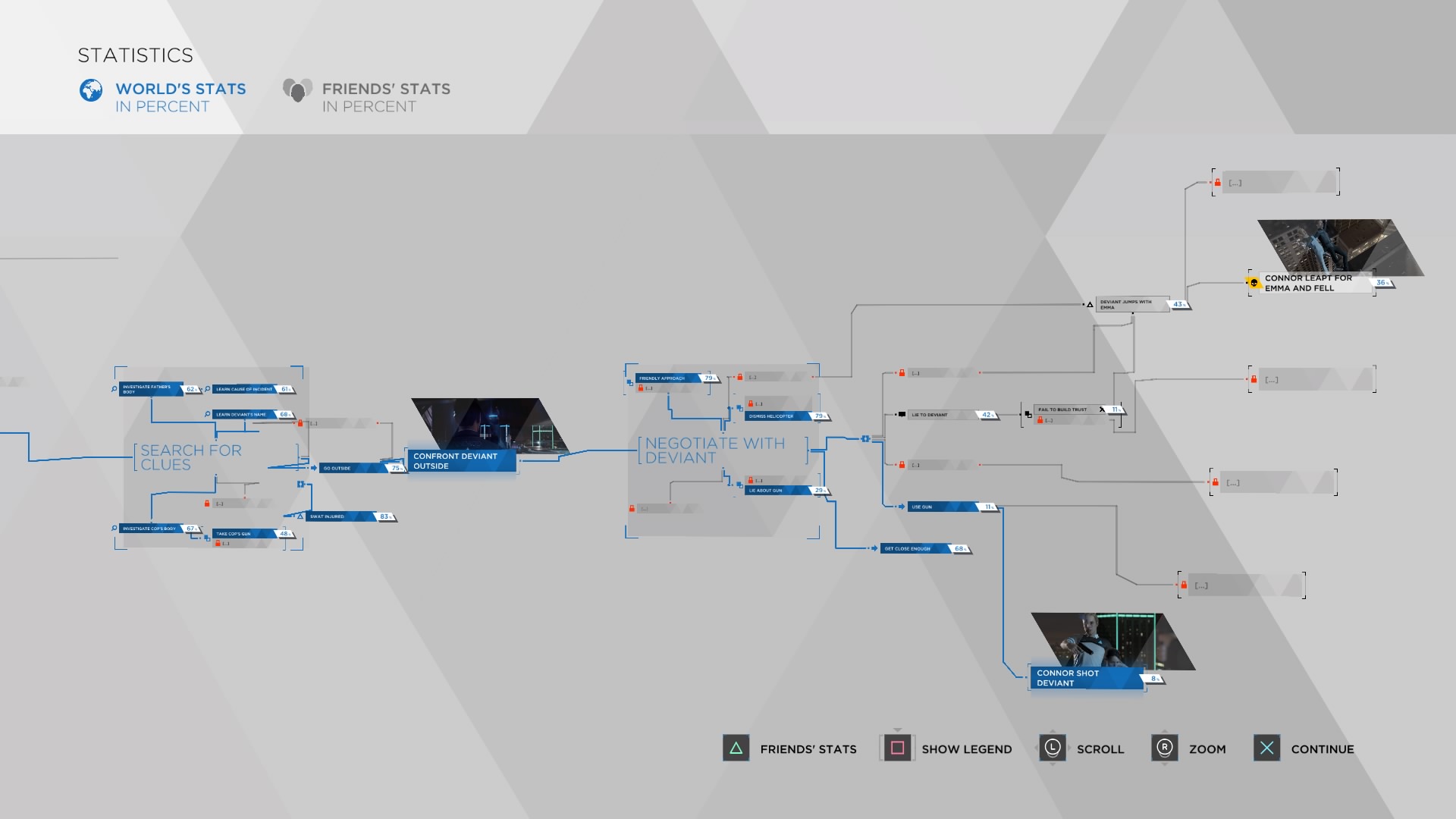 The scene map for the demo of Detroit: Become Human

Quantic Dream and Sony have released a demo for Detroit: Become Human, and this demo is what solidified my choice to pre-order the game. The demo is short; you can play through it in about 15 minutes, but I think it captures a lot of the choices and tone of the full game. 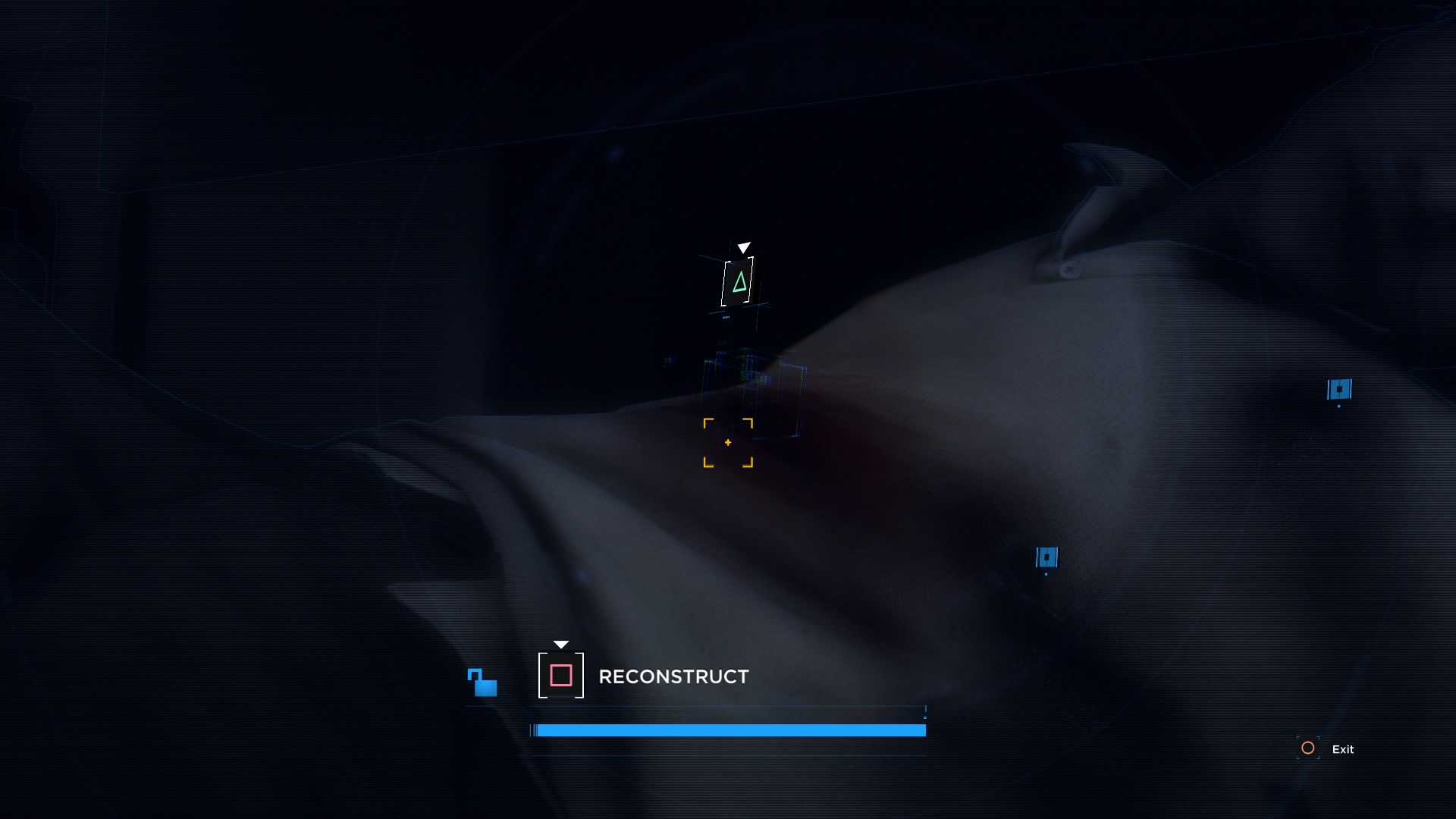 Reviewing Evidence as Connor in the Detroit: Become Human demo

In the demo you play as Connor, a negotiator with the Detroit Police Department. Your goal is to rescue a little girl being held at the edge of a roof by her family’s malfunctioning android. You arrive at the scene and can either go right out to meet the deviant or instead investigate the scene to find clues that may help in the negotiation. This small section of the game gives you a lot of freedom and allows you to make several different choices that will affect the outcome of the scenario as well as have in impact on the game as a whole. There are a total of six different endings to this scene, and I imagine that these endings will impact the overall story in the full game.

As you can see from the 2017 E3 trailer above, this game has huge potential, but the style may not be for everyone. If prior Quantic Dream games are any indication, the gameplay will be slower and focus more on the story and player choices. The subject matter of the game and some of the scenarios may also put some people off or make them uncomfortable. I personally think that is a good thing and will set it apart from other titles. Gamers will want to check it out for themselves and see how their choices change their story.

Detroit: Become Human will also be an exploration of what it means to be human. You can see from some of the character interviews above that there are scenes where the androids say that they are not just things, but people too. It will be interesting to see how this dynamic plays out and what effect it will have on each individual player.

If you are curious about the game, make sure to check out the demo before it releases on May 25th. I think this game could make a huge splash and continue the trend of great single-player PlayStation 4 exclusives.