See the world through the eyes of a machine

Detroit: Become Human is the latest game from Quantic Dream and was released on May 25, 2018. The game follows three androids in a futuristic Detroit as they struggle with an outbreak of deviant androids. Players control Connor, Markus, and Kara as they forge their stories and make choices that will affect the entire world. 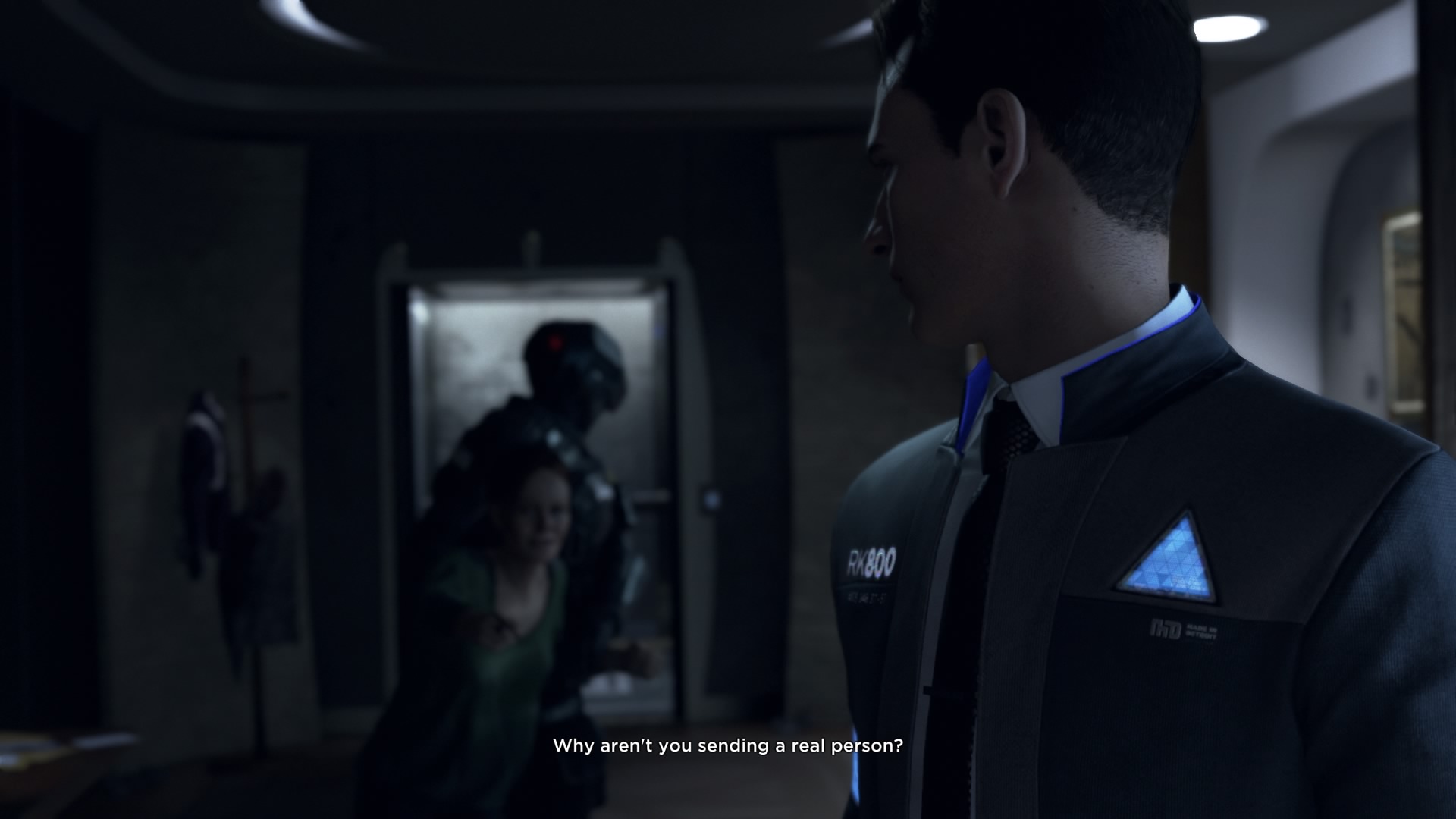 Humans do not trust androids

In 2038, androids have become common in the US with a large population of them residing in Detroit, where they were created by CyberLife. These androids are incredibly life-like and are starting to do many of the jobs humans looked down upon, like construction, trash collection, janitorial work, etc. This has stimulated the economy but also increased the unemployment rate in the US to over 33%. Naturally, many humans have a hatred for androids and treat them with disdain. Recently, more and more androids have started to go against their programming and become “deviant.” 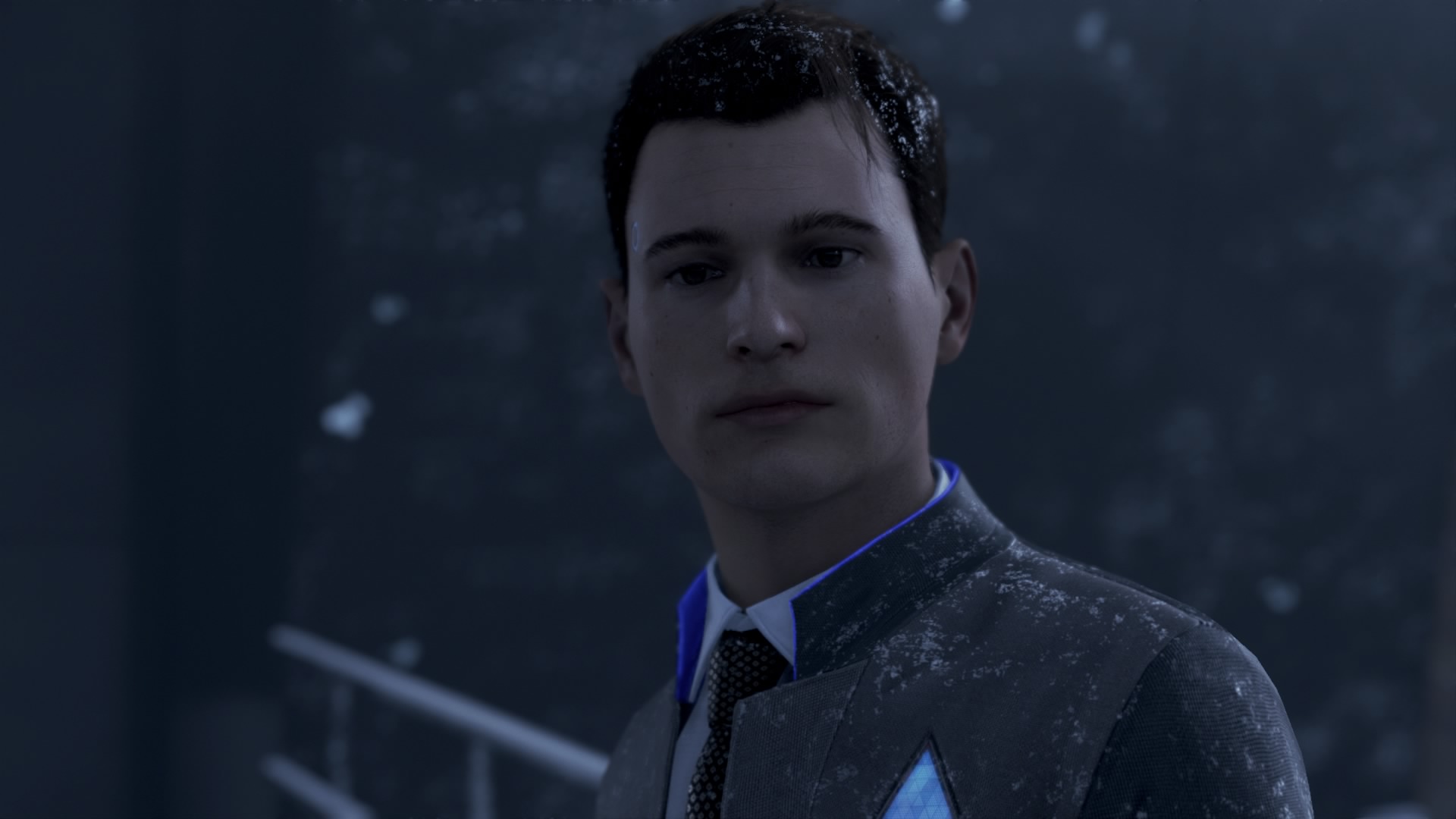 It is against this background that we meet Connor, Markus, and Kara. Connor is a bleeding-edge prototype android tasked with investigating the recent increase in deviants. Markus attends to a sick, aging artist who cannot care for himself. Kara lives with a man and his daughter and is expected to clean the house, cook the food, and care for the daughter. Each of these characters have unique stories that, at times, intertwine and affect the endings players can receive.

One thing that may rub people the wrong way is the content of the story. It is about androids trying to become free from humans, and how they are individuals as well. It is a tricky theme to deal with and in the current climate in the United States may touch some nerves. There are also some scenes (like Kara’s “break free” scene) that could be hard for some to play. Personally, I think the story works well and can be crafted towards each player through the choices made.

While the story is good (albeit a bit cliche at times), it’s the choices that really shine in this game. In every scene, players have to make choices, sometimes quickly and other times with more thought. These choices can not only affect that character’s story, but also the stories of the other protagonists. 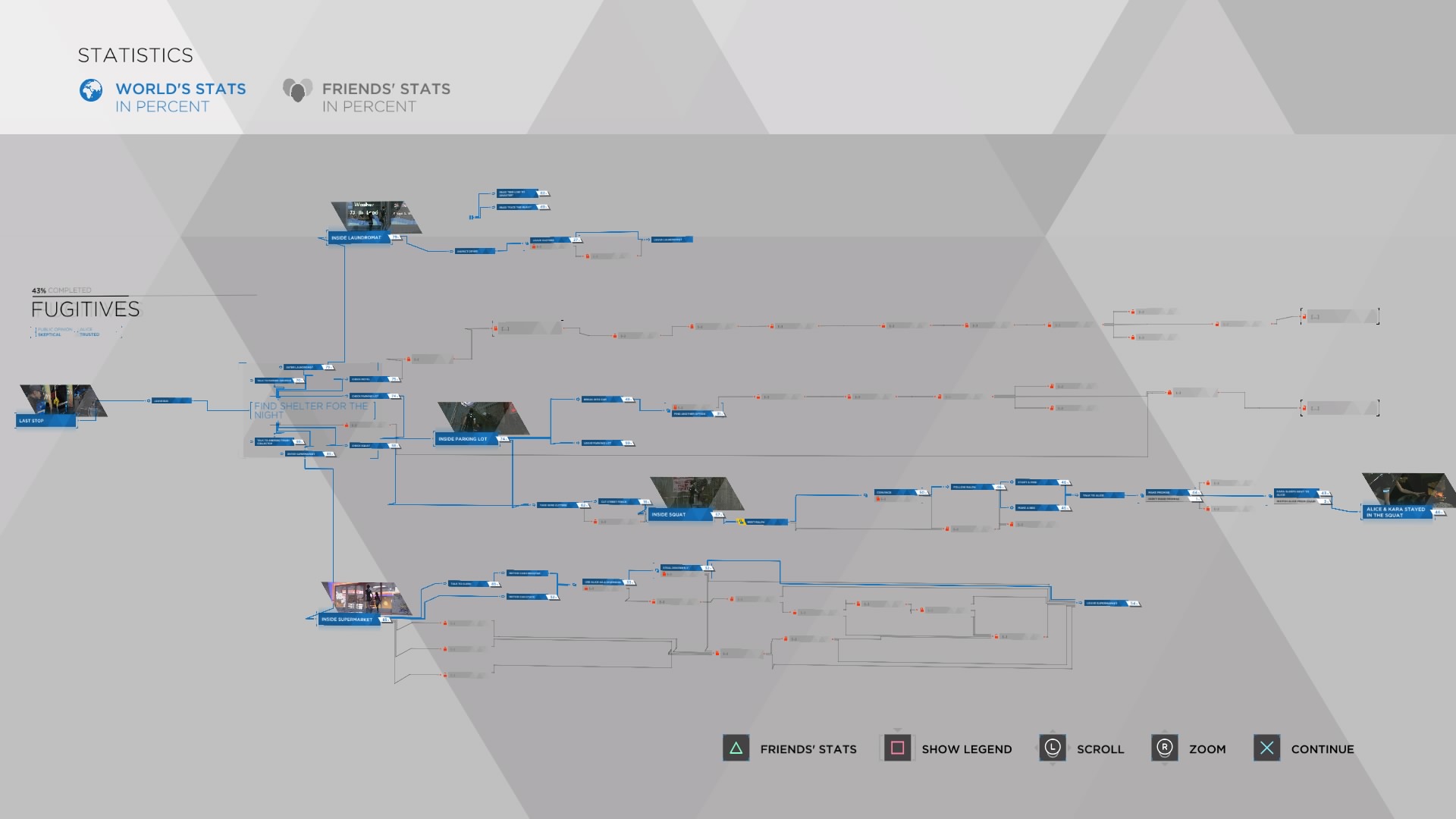 The flowchart for an early scene in Detroit: Become Human

The scenes that Quantic Dream have created are immensely complicated. One simple choice can close off an entire branch of the story. After each scene, players are shown a flowchart of that scene and how their choices affected the game. There can also be connections from previous scenes, and I even saw a few flowcharts that were blank due to my previous choices. This creates a lot of re-playability as players can try different choices to get to different outcomes. The number of choices and variation really make it stand out to me and makes me overlook a few shortcomings in the game. 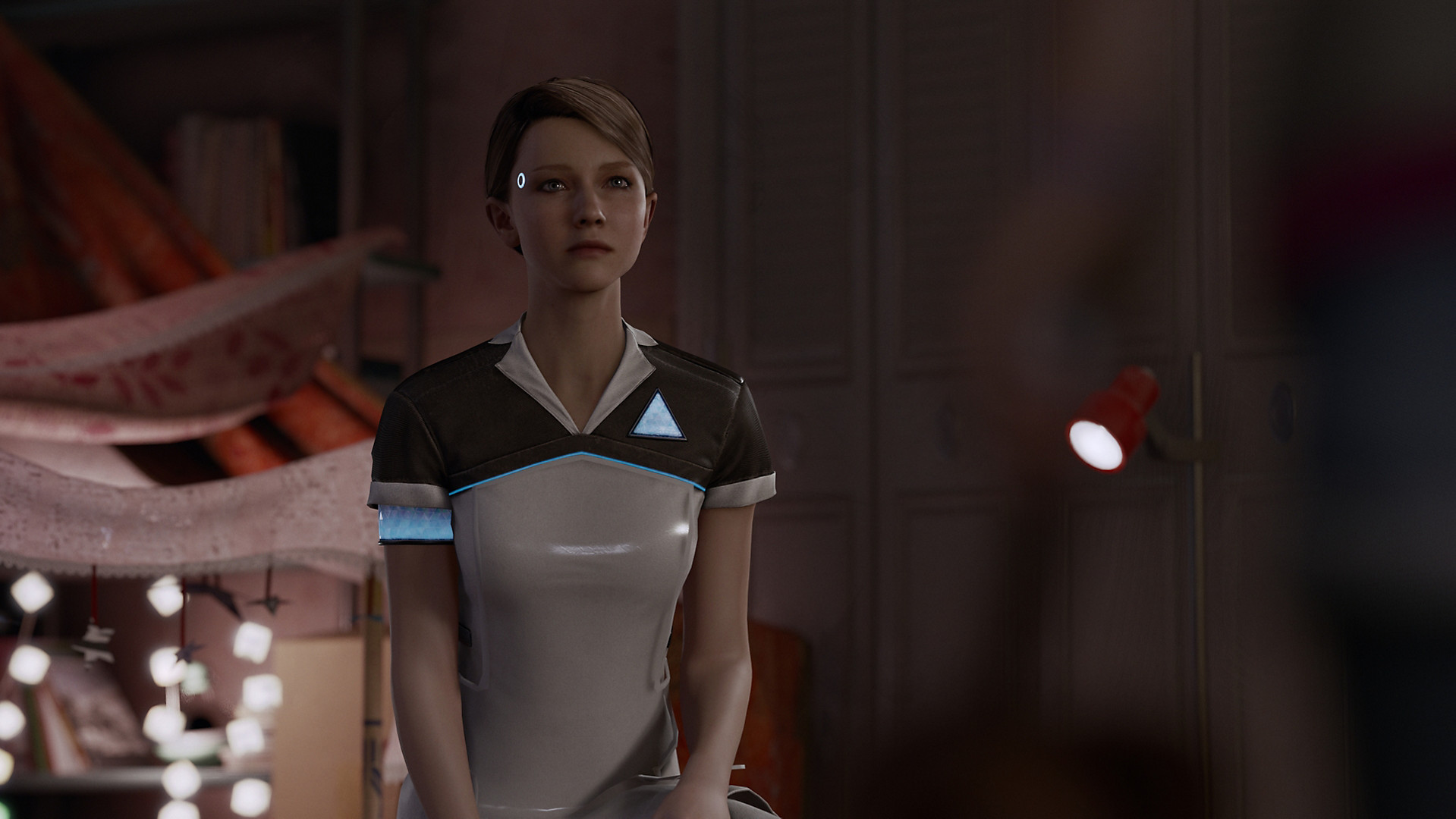 If you have played a Quantic Dream game before, you know what’s in store for gameplay in Detroit. Most of the gameplay consists of players moving Connor, Markus, or Kara around and interacting with the environment using on-screen prompts. One thing that is cool about this is that Quantic Dream was able to use the entire controller. The prompts for interacting with the environment, and the quick time events, have players pressing buttons (or multiple buttons), moving the controller itself and using the touchpad built into the controller. I actually like the diversity of the controls, even if they didn’t always register for me. 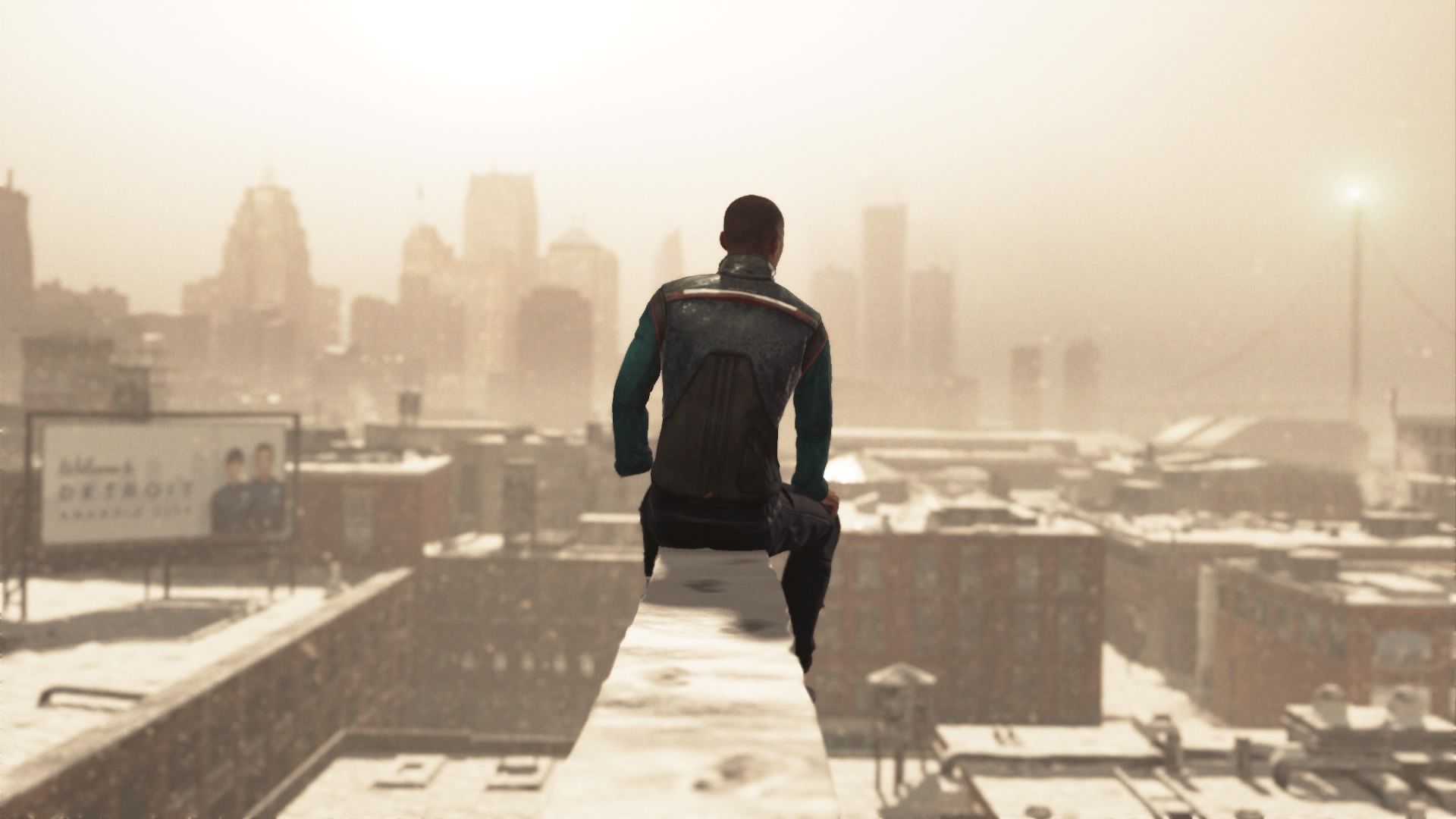 The soundtrack for Detroit is fantastic. The music throughout the game helps set the mood and makes the game that much more enjoyable. There are actually several soundtracks for the game as each protagonist is given their own. It helps to keep the three stories unique and really assists the level of immersion.

Detroit looks crisp, even on my older TV and PS4 Slim. The city is beautifully crafted and most of the scenes look very lifelike. There were a few times where I thought the graphics slipped a bit, but overall they are fantastic. As was done with the soundtracks, each of the protagonists feature unique visual styles and even different color schemes. 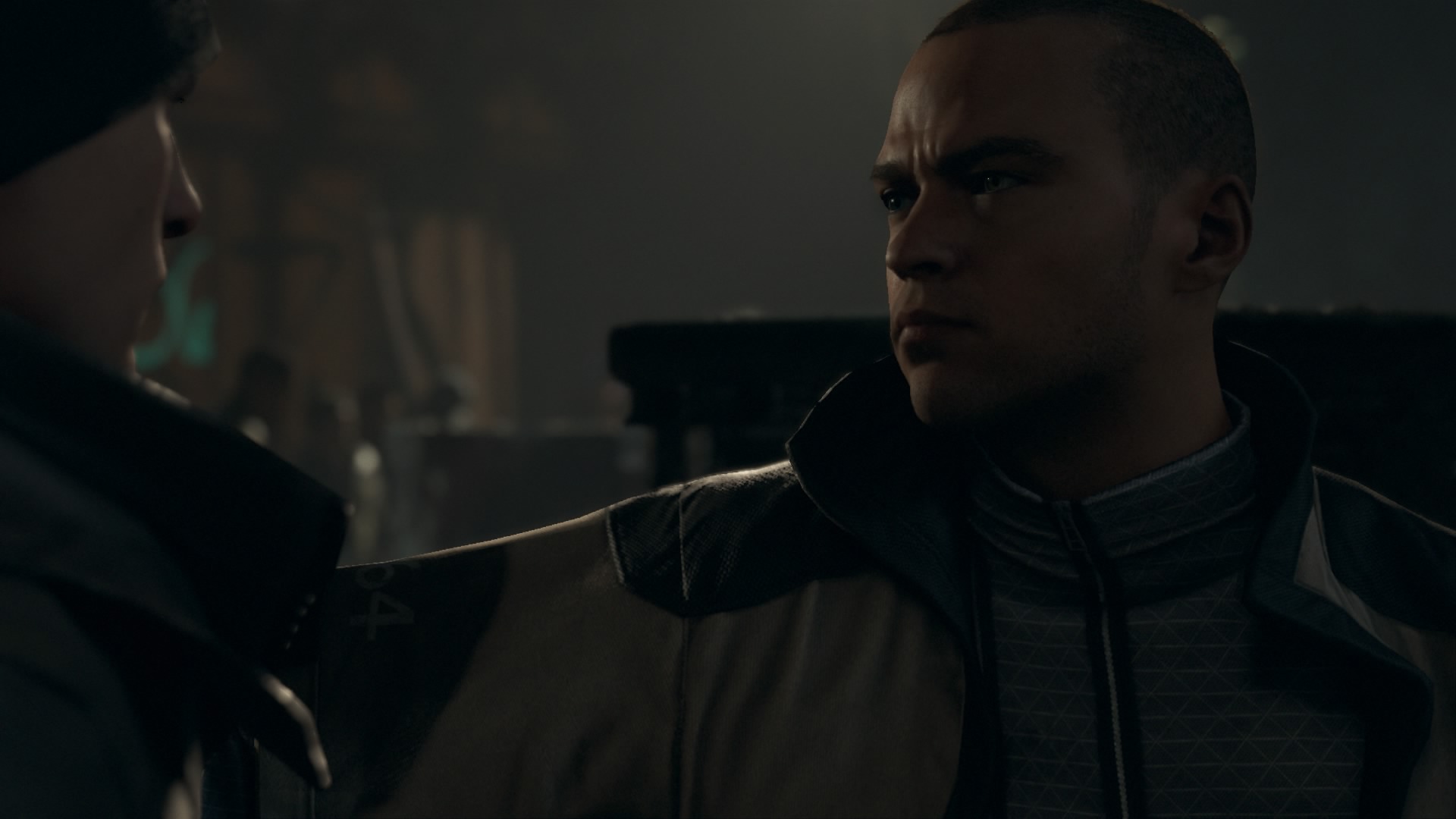 Markus during a scene in Detroit: Become Human

Detroit: Become Human may be one of my favorite games of this generation, even if it has some faults. The story is engaging and the amount of player choice is light-years ahead of anything I’ve played before. The story I experienced is my story. I doubt there is anyone else who made the exact same choices that I did. Also, seeing the flowcharts for each scene shows just how much variation there is and makes me want to play the game again to see how different choices play out. It is definitely worth the investment of time and money.

Detroit: Become Human is Quantic Dream's best game to date. The story moves well and will keep players engaged, even if it can be cliche at times. Each play-through will be unique, as choices definitely matter. Things you do early in the game can affect future scenes, and even lock you out from entire sections of the game. Detroit can be a very personal story so it is unlikely that someone else took the exact same path to the end as you did.
8.8