It has been seven years since Borderlands 2 was released and now we find ourselves back in the borderlands. Gearbox wows us with great storytelling, beautiful scenery, and some amazing and amusing weapons, but it isn’t all fun and games. 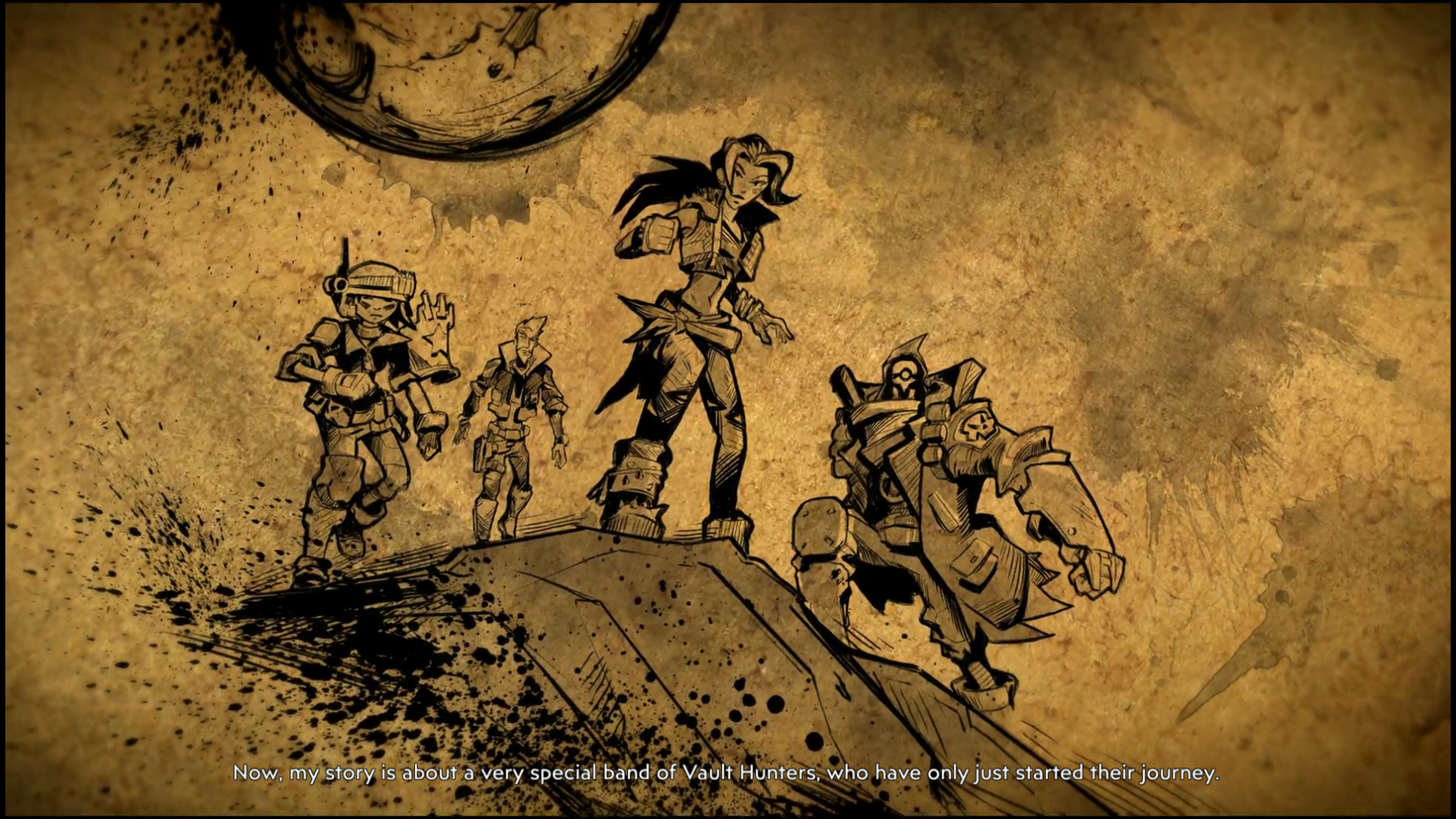 So you want to hear a story…

The Borderlands series has always been classified as a “Looter Shooter”, but there is more here than the massive amounts of loot that you have to make organized runs to the vending machines. There is a heart. It’s funny, I never thought of the story of Borderlands until now. I, like many others like me, overlooked the story in favor of all the shiny things. While I was playing through Borderlands 3 a moment happens that is completely unexpected, and it floored me. I started to protest that this isn’t like Borderlands to have this type of story, then I really started to think about Borderlands 2 and the Pre-sequel. I realized that while we ignore most of the story it is there staring us in the face. It isn’t all happy and Butt Stallions. There are tears.

A Borderlands game has made me ugly cry before, the story is so good and funny, but heartbreaking at the same time. It sneaks up on you too. Just when you think your character is getting the upper hand, they gut punch you and something tragic happens that you didn’t see coming. Borderlands 3 is no different. I won’t spoil the story here, but dang, y’all I was NOT prepared. I’ve got to hand it to Gearbox, they KNOW how to write a story, and Borderlands 3 is no different. If you have never played a Borderlands game do yourself a favor and watch someone play it on Twitch, YouTube, or Mixer. You don’t have to be a gamer to enjoy an amazing story. 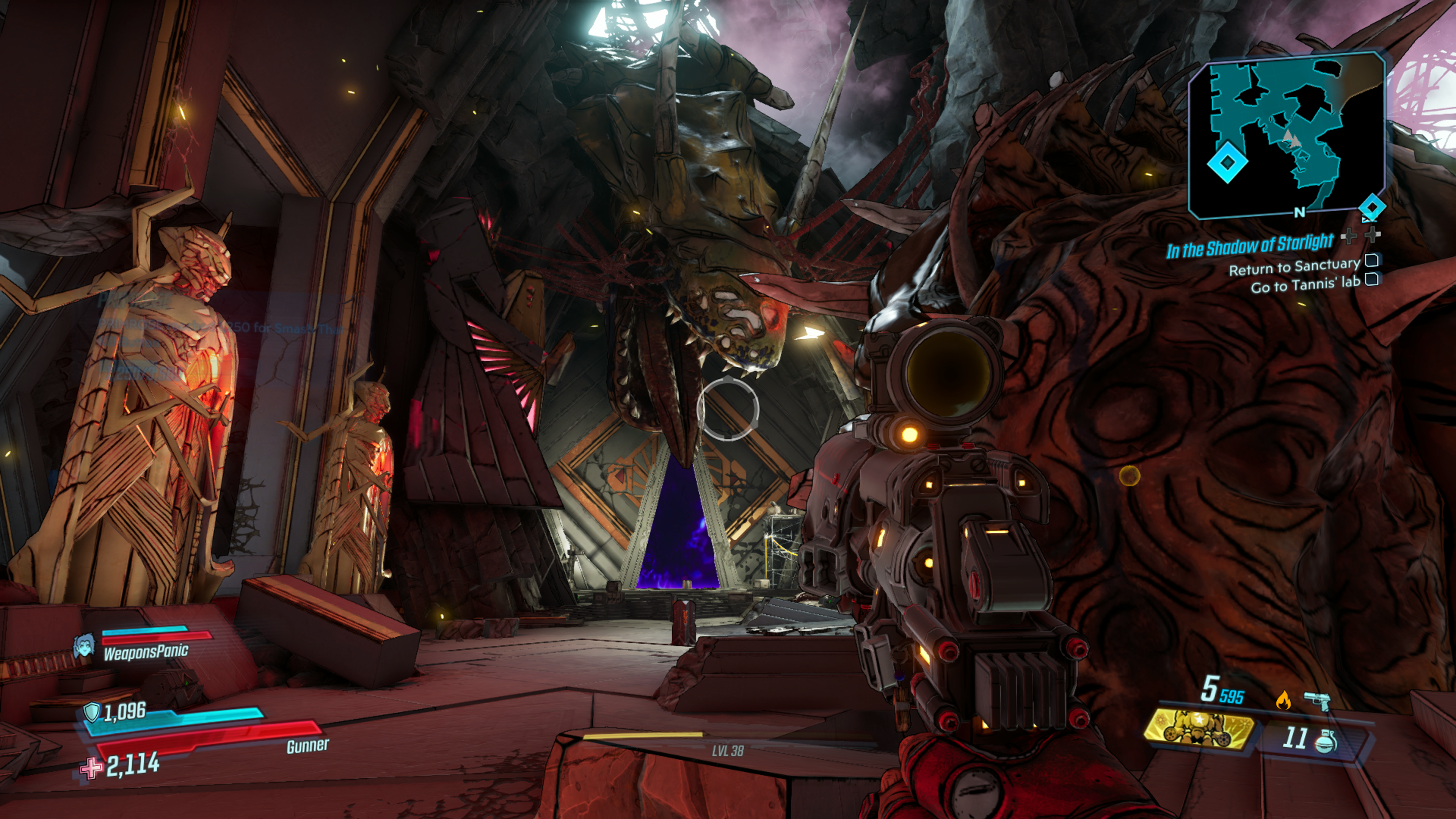 Borderlands 1 and 2 were both very…brown. Our characters were relegated to one planet, that just happens to be the worst place in the universe, sand and deadly creatures, insane bandits…You get the drift. The Pre-Sequel took us to Elpis and we got to experience life beyond Pandora, it was just a taste, however, as it was pretty much gray and purple. But BL3? Oh man. Every planet is unique and beautiful. There are plenty of locations away from the fighting to look out over the horizon and enjoy the artists’ work. From corporate planets to a swampy mess each planet takes on a life of its own, but you can feel the inspiration. Each planet’s map is huge and is often broken up into smaller subsections for use in fast travel. It is easy to get lost as there are many twists and turns and elevation. When you open up the map you can rotate your map around and even tilt it for those hard to find locations that may be above or below you. It is easy to underestimate the scale of the map, but I am here to tell you, vehicles are a must. Whether you hijack one or build one at the catch-a-ride stations littered across the map you will need it. “Do you have a favorite, ldycalluna?” Heck yes, I do, thanks for asking!  The cyclone is my go-to when playing solo. It’s a single-seater, but man, can that giant wheel move! You can customize them also! There are weapons, armor, wheels, and skins to be manipulated until you are satisfied. Hot tip, there are skins that will change what sound your horn makes. I suggest you find the one that makes it sound like a screaming goat. Your friends will love you for it.

There is no mistake that Borderlands 3 is a looter shooter with a bazillion guns. It sounds amazing, doesn’t it? I find that it is a dual-edged sword, however. Do you know that one quote? About being surrounded by water, but not a drop to drink? That is kind of the situation here. There are guns everywhere, but most of them are either under your level or you just get pistol drops for 5 levels straight. It can be frustrating. There are a ton of ways to get weapons, though. From Marcus machines, Earl, boss drops, or chests. Often one of those places will have at least one weapon that is worth picking up. Other times you are just stuck with what you’ve been using for the last 5 or so levels.  It makes boss fights extra challenging!

It isn’t all bad though. There are some wicked guns to be had if you are lucky. One is called the “Superball”. It will tickle anyone that loves Super Mario Bros. The flavor text says “Flower Power” and it shoots Mario-esque fireballs, complete with the ascending “plink” sound. There are so many of these types of guns that will remind you that Gearbox loves video games and will reference ones that they love.  I’m looking at you, Dinklebot… 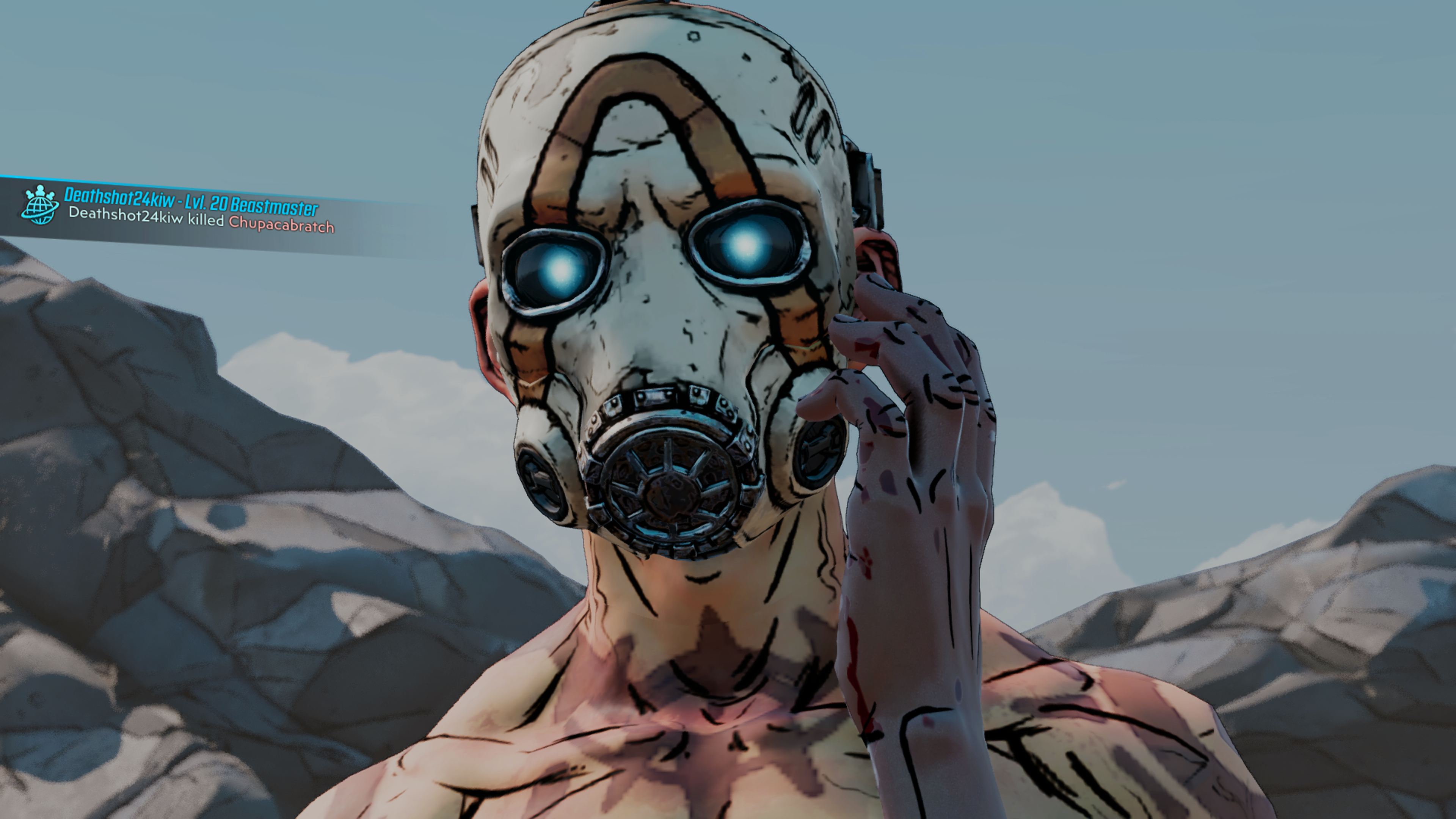 I love this game. Those who know me know that I am a massive Borderlands fan and will encourage anyone I meet on the street to give it a try. Yes, I have done this. Borderlands 3 is a solid representation of the series, with over the top humor and ridiculous weapons. The story is heartfelt and warm. But I will not say it is a 10/10. Hear me out. I’m not mad at story developments, nor do I hate any of the characters or the jokes. My reason is purely mechanical. There are some issues that have already been addressed by Gearbox (bravo). However, it doesn’t end with just one patch.

In my playthrough, there were issues with Moze. If she was under any kind of damage over time effects when I popped Iron Bear I would immediately be ejected and lost my “super”. This feels broken as every other character can use their Action Skill while being damaged. Some boss fights were tuned a little too hard. I understand the one I am speaking of is probably a “gear check” boss, but damn, Billy, why you gotta spawn camp me like that?! It was probably one of the first times I have actually rage-quit a single-player game. It took a couple of hours and bribing my 12-year-old son to play with me just so I could give Billy someone else to harass while I whittled him down, sorry son. Mommy loves you!!! So getting down to the nitty-gritty, when it was released I was going to give it an 8/10, however, seeing they are actively listening to their community, I say a solid 9.  Thank you, Gearbox!! 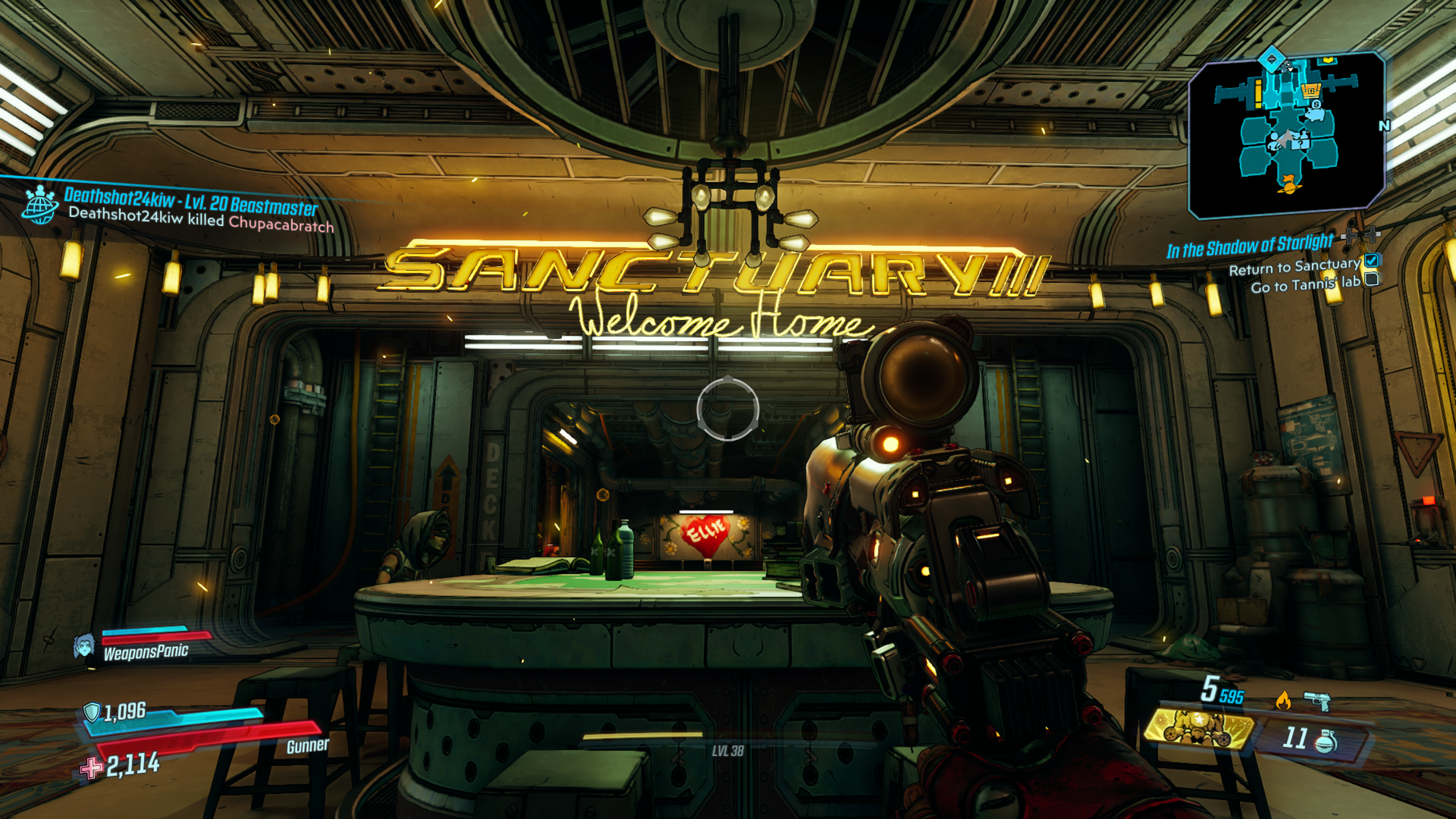 I am eager to see the upcoming DLC, even though I was disheartened by the news that there will not be DLC player characters.  That’s ok. I suppose I will make do with my explosion-loving digital soul-sister, Moze, which is short for Moserah Hayussinian Ya-Lun al-Amir Andreyevna. We appreciate her shortening it.

Have you gotten around to playing BL3 yet? If so shoot a comment below about what you like or don’t or who you are playing! We are always covering new content so keep coming back for more on your favorite games and comics!!

Gearbox has done an amazing job with the story behind Borderlands 3. It is honest and hilarious at times. It takes us to planets we have never seen that are colorful and singular. They are full of life and personality. Borderlands 3 is more of what we love about Borderlands but with the addition of more customization options and a boat-load of new guns. There are good things and bad things about the game, but it is a solid return to a beloved series.
9

The Evolution of a Franchise – The Gears of War 5 Review